The Lady Sings the Blues, The Drummer Creates Many Hues, & Great Music Made by Two! 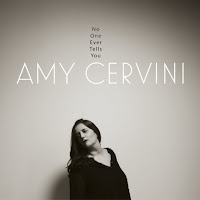 Amy Cervini is a busy and very modern women. The Canadian-native has a family with producer Oded Lev-Ari (with two young children), she owns (or co-owns) a publicity firm, and is one-third of Duchess trio (along with Melissa Stylianou and Hilary Gardner).  With Duchess, she is co-host of the group's very enjoyable podcast "Harmony and Hijinks."

For her fifth solo recording, "No One Ever Tells You" (Anzic Records), Ms. Cervini has dug deeper into the blues than in the past, producing a powerful album whose emotions run deep. Her crackerjack band - Jesse Lewis (guitars), Michael Cabe (piano), Matt Aronoff (bass), and Jared Schonig (drums) plus Gary Versace (Hammond B-3 organ on four tracks) -  helped to develop the arrangements over the past few years during the ensemble's weekly residency at NYC's 55 Bar.

The album opens with the only original on the program.  "I Don't Know" stretches the leader's voice in ways one hasn't heard before. That fascinating blend of soul and blues continues with Lyle Lovett's "God Does", adding a touch of country to the mix.  The soul dripping work of the band frames the voice and allows for Versace's burbling organ to interact throughout (as well as solo). The title track, composed by Hub Atwood and Carroll Coates, was first recorded in 1956 by Frank Sinatra but it was Seth MacFarlane's 2016 version that Ms. Cervini first heard. She replaces the big band groove with sturdy guitar work but pay attention to Cabe's excellent piano accompaniment.

There are surprises throughout the album starting with the dream-like reading of "The Surrey With The Fringe On Top."  Performed at the pace of a snail, the Rodgers & Hammerstein frolic is transformed into a lullaby. It works!  Ms. Cervini and the band dance dreamily through Bertha Hope's "You Know Who" - Ms. Hope was married to jazz pianist Elmo Hope and has a very impressive career, not only as a performer and composer but also as an educator (her husband passed in 1967: she the married bassist Walter Booker).  Jesse Lewis's hard blues-rock guitar licks introduce "Bye Bye Country Boy", a Blossom Dearie tune that Ms. Cervini first recorded on 2009's "Lovefool."  Here, the song has a slower pace befitting the bluesy approach the band takes. Following that is a smashing duet with Versace on the Arlen-Mercer "One More For My Baby (and One More for the Road)" - first recorded in 1943 by Fred Astaire for the movie "The Sky's The Limit", the duo here have great fun recreating the feeling of the last song of the last set, perhaps 3 p.m. in a New York City bar.

The album closes with the Percy Mayfield classic "Hit The Road Jack" - Ray Charles had a huge hit with the song in 1961 (the song lasted less than two minutes yet stuck in one's brain all day) and it's fascinating to hear the original demo - click here).  But Ms. Cervini replaces the "bounce" of the original with a sultry take that does not have the humor or anger of the original yet there is no missing the singer's intention, that being "get out and stay out". The band takes the place of The Raelettes, Mr. Lewis lays down some fine blues riffs, and the leader caresses the lyrics with just a hint of resignation.

I will tell you that "No One Ever Tells You" is a treat from the opening notes to the soft landing that closes the program. Amy Cervini is a singer, a story-teller, and has a good ear for finding songs that not only fit her voice but also entertain and entrance the listeners.  And, the band shines throughout.

For more information, go to www.amycervini.com. 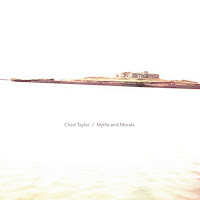 Drummer, percussionist, and composer Chad Taylor has an impressive track record.  He's a founding member, along with trumpeter Rob Mazurek, of the Chicago Underground Duo (and its many offshoots), has recorded and toured with Marc Ribot. Cooper Moore, Matana Roberts, Eric Revis, the late Fred Anderson, and many others.  He's quite knowledgable about the history of his instrument and of the music.

His third album as a leader, "Myths and Morals" (earandeyesrecords), is a solo album of the first order.  One can hear the influence of the AACM, especially the work of Famadou Don Moye (Art Ensemble of Chicago) yet Taylor sounds nothing like that famed drummer.  There is something so appealing about "Gum Tree", a mbira solo that has a dancing rhythm, the "thumb piano" displaying its percussive side.  Other pieces, such as "Abtu and Ahnet" and "Simcha", have a dance feel as well. That latter track, the shortest on the album at 1:44, has an irresistible forward motion. Elliot Bergman joins Taylor, playing a somewhat distorted electric kalimba - one imagines dancing to that beat all night long.

There are many moments when one marvels at how these pieces are constructed. Taylor is not showing off any fancy technique but using his percussion instruments to tell stories. Listen to he builds "The Fall of Babel", the intensity moving from the cymbals as the beginning to the floor toms near the end.  Note the electricity, the drone created by looping, and the lovely African melody on "Island Of the Blessed", a piece where the sounds, natural and electronic, collide yet still dance.

I love the snap of the snare, the thump of the floor tom, the whooshing cymbals, the warp of the high-hat, all of it, and how Chad Taylor is as much an architect as a composer.  "Morals and Myths" is fascinating music, well worth investigating.

For more information, go to www.chadtaylordrums.net.

Joel Frahm (tenor and soprano saxophones) is a very talented musician equally at home in a quartet setting and a big band, as a leader or a sideman. He has worked, most notably, with pianist Brad Mehldau, drummer Matt Wilson, and is currently working with drummer Dafnis Prieto's Big Band as well as numerous groups in New York City.  Pianist Adrean Farrugia has been an integral participant in the Canadian music since the later 1990s and his brilliant play has taken him around he world with the likes of guitarist Larry Carlton, saxophonist Chris Potter, trumpeter Kenny Wheeler, and bandleader Darcy James Argue. The pianist first met the saxophonist 10 years ago when both began working with drummer Ernesto Cervini's Quartet and his sextet Turboprop.  The two musicians have similar attitudes to music. Melody is king and what we do is play in every sense of the word.  They talked for several years about playing in a duo setting and, now, listeners can finally hear the fruits of their interactions. 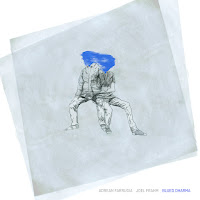 "Blued Dharma" (self-released) finds the duo through eight spirited performances, including two delightfully different takess of Ray Noble's venerable "Cherokee."  It's as if the the first time one hears the song (actually marked as "Cherokee II"), it's in the first set and the musicians excitedly move through the piece.  "Cherokee I" sounds like we're now in the third set: the duo's interactions are a bit more contemplative and released but no less enjoyable. Frahm's soprano shines brightly on the title track. After a poetic piano intro, the soprano introduces the handsome melody. If you have never heard Farrugia play, he may remind you of Chick Corea or Keith Jarrett. I hear Bruce Hornsby, especially in the bounce created by his left hand and his impressive facility. 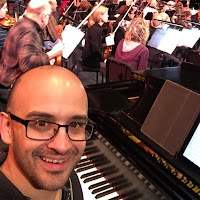 Their ballad work is filled with space and emotion. "For Murray Gold" opens with Frahm's breathy tenor with Farrugia doubling the melody but also providing soft chords and rippling responses.  The pianist feeds off the rhythmic and melodic choices that Frahm makes during his solo - it feels at times as if the two were gliding together, letting the wind take them wherever it will. The short piano solo is heartfelt and exquisite.  The other slow(er) tune, Jerome Kern's sweet "Nobody Else But Me", has more pizazz - the duo is in no hurry, making you sure you hear the breezy melody before Frahm ventures out on a delightful solo.  When the pianist steps out, there was a moment I heard a hint of Dick Hyman in Farrugia's sprightly phrases and rhythmic approach.

The album closes with the pianist's "Half Moon (for Sophia)", a lovely uptempo tribute to Farrugia's wife and another musical partner Sophia Perlman (they have a duo album of their own, "Live at The Musideum", released in 2012).  The powerful groove that the pianist creates is a springboard for Frahm's splendid soprano saxophone flight.

Sit in the back porch (if you have one) or in a shady park on a lovely day and just listen to delight-filled music that makes up "Blued Dharma".  Adrean Farrugia and Joel Frahm must have had great fun making this album as the music has a professional (not business-like) yet carefree feel.  Trust, melody, and wide-open ears, the duo makes magical music certain to excite the mind and soothe the soul.

For more information, go to adreanfarrugia.com.