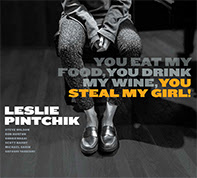 When one comes across a title such as "You Eat My Food, You Drink My Wine, You Steal My Girl", you either expect a comedy album or one by blues belter. You also expect there is a story behind it.  There is and it's one of "right place, right time" incidents. Leslie Pintchik overheard someone say those very words as the pianist and composer was walking through Soho in New York City.

For this, her sixth album as a leader (all but two on her Pintch Hard label) brings back the "core" band of her previous releases and that would be  bassist and guitarist Scott Hardy, drummer Michael Sarin, and percussionist Satoshi Takeishi.  Also returning on two tracks are Steve Wilson (alto saxophone) and Ron Horton (trumpet, flugelhorn) and, on two different tracks, Shoko Nagai (accordion). 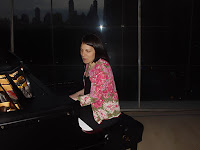 If you have never heard Ms. Pintchik's music, you might be surprised that she actually studied 17th Century English Literature (all the while playing piano).  She found playing piano more rewarding and has kept up a busy schedule over the past decade + (currently, she has a regular trio gig with Hardy and Sarin every other Saturday night at Alvin & Friends in New Rochelle.  Still, her songs have a story quality; that gives them more depth than songs written to "blow on."  Certainly there are solos here but never at the loss of a good melody line.

The qualities I have admired in her previous - intelligent melodies, smart interplay with the band, and solos that unwind in the most fascinating ways - all that and more is evident on the new recording.  The title track bounces with a delightful funky feel, the horns alternating between quick jabs and flowing melodic phrases. Ms. Pintchik solos almost from the get-go riding gleefully along the percussion pop of Sarin and Takeishi.  Hardy overdubs a rippling solo: one hears a touch of later Steely Dan in the blend of rhythms and the guitar work.  Wilson steps out as well, her sweet alto sound dancing right along with the band. 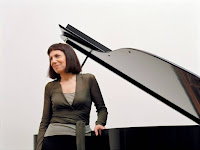 Besides six originals, there are two standards.  A soft Caribbean feel inhabits the rhythms of "I'm Glad There Is You", a tune composed in the early 1940s by Jimmy Dorsey and Paul Madeira.  The piece has been covered by Ella Fitzgerald, Sarah Vaughan, Frank Sinatra, and Beyonce! You can hear that Ms. Pintchik knows the lyrics and enjoys the melody - her solo has an airy, gentle, feel and, if you pay close attention, it also swings.  "Smoke Gets In Your Eyes" follows, Takeishi's "popping" percussion leading the rhythm section into a samba.  Hardy overdubs acoustic guitar but pay attention to his fine bass work; not just his solo but how he lets the drummers create the rhythm while he plays counterpoint.

Ms. Nagai's two tracks include "Hopperesque", a ballad with samba rhythms though the accordion suggests a tango feel, and the joyful "Happy Dog." Sarin sits out but Takeishi pits, patters, shakes, and rattles on cajón and hand percussion.  The blend of the clean piano sound and the reedy accordion with the acoustic bass and percussion seems enchanting and enchanted.

One would love to see the bright and breezy "Your Call Will Be Answered By Our Next Available Representative, In The Order In Which It Was Received. Please Stay On The Line; Your Call Is Important To Us" be nominated for a GRAMMY just to hear the presenters say the title on the air (as if the networks would air the Jazz category).  I suppose it's possible Ms. Pintchik wrote the snappy melody while she was on hold but the song is too upbeat to be angry.

To call an album with the title of "You Eat My Food, You Drink My Wine, You Steal My Girl" a serious effort is not being sarcastic. Yes, the music is playful at times and it's obvious these musicians are having fun in the studio. You can play this album in the background while doing other things; music fits most moods.  But, if you pay attention to how the musicians frame the songs, how they interact, how they "listen and respond", there's more to it than meets the inattentive ear.  Leslie Pintchik can always fall back on her Master's Degree but her music is mature, modern, and worth your attention.

For more information, go to www.lesliepintchik.com. 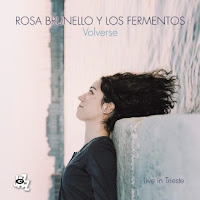 Bassist and composer Rosa Brunello is a new name to me but has been involved in the Italian and European jazz scenes for nearly two decades.  "Volverse" is the her second release for CAM Jazz and the second to feature her group Los Fermentos.  For this album, she has pared down to the personnel to a quartet that features Filippo Vignato (trombone, electronics), Alessandro Presti (trumpet, electronics), and Luca Colussi (drums). The album was recorded live in Trieste in February 2017 and gives the listener a good look into how an improvisational unit works, especially one without a chordal instrument. Several of the pieces are built upon "the groove"; the opening "Stand Up" rides in atop a slinky bass line and 4/4 drums to introduce a melody played (initially) by Presti's muted trumpet (which gives the piece a feel of late 1960s Miles Davis). The groove changes slightly for "California Dream" while the thematic material has a funky feel of its own. 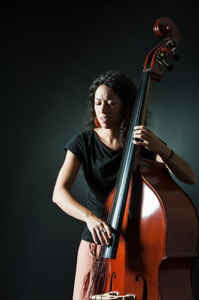 It should come as no surprise that "Pina Bausch" has a dance feel as the song is named for a choreographer, performer, and teacher (1940-2009). Colussi creates a handsome swirl of percussion, especially active on his cymbals while Ms. Brunello plays excellent counterpoint for the soloists (note how she supports Vignato's solo and makes delightful statements alongside Presti). "30 Nighthawks Indeed" has a hint of Dave Holland's groups that featured Robin Eubanks, Kenny Wheeler, and/or Julian Priester. You hear it in how two brass lines wind around each other, hear it in how the opening lines are melodic, playful, meandering, and clear-toned. When the rhythm section enters, the musicians create a ruckus with the interactive percussion and Ms. Brunello's powerful counterpoint. And the electronics, in the form of loops, swirl around the bottom of the sound spectrum. 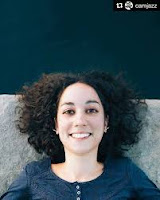 For more information, go to www.rosabrunello.com.

Here is a live version of the title track: 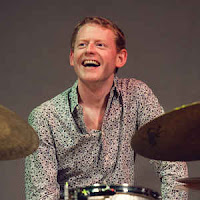 Drummer and composer Andrew Bain, a native of Edenburgh, Scotland, began studying drums and percussion in his youth (both classical and jazz).  He's been active on the English and European scenes since the late 1990s and now splits his time between London and New York City.  Bain released a pair of albums around the turn of the Millennium and has gone to be a first-call musician for London stage shows and classical orchestras.  Currently, he leads a quintet, Player Piano, that is composed of guitarist Mike Walker, pianist Gwilym Simcock, saxophonist Iain Dixon, and bassist Steve Watts; Bain is also the music director of the National Youth Jazz Orchestra of Scotland. 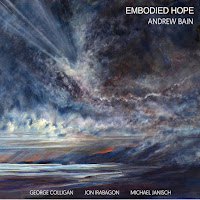 His newest venture is a quartet, one that features saxophonist Jon Irabagon, pianist George Colligan, and bassist Michael Janisch.  Bain wrote a program of music, took the ensemble "on the road" in Great Britain in early November of 2016.  Right near the end of the two-week tour, he took them into the studio where they recorded "Embodied Hope" (Whirlwind Recordings).  The band truly gelled and the results are exciting, enjoyable, and challenging.  The project reminds this listener of the new Irabagon CD, "Dr. Quixotic's Traveling Exotics" - both recordings feature a group in the midst of a tour. at the height of its interactions, a time when they totally trust and support each, music which rises far above the mundane.  There is not a weak or dull moment in the hour-long program.

The album opens with "Accompaniment", a rubato work that will surely bring the John Coltrane Quartet to mind. Wave upon wave wash over the listener; there's no harshness as the work sounds like a prayer, a call for the Spirit to inhabit the body of the band members and give the the power to play.  "Hope" follows (see the video below). What stands out is the handsome melody, the powerful piano work of Colligan, the driving force of Janisch and Bain, plus the muscular and rich sounds of Irabagon's tenor.  It's the longest work on the album (12:12) yet has such a compelling flow. Colligan channels his inner McCoy Tyner, his right hand dancing across the keys in abandon but never does he get lost.  Pay attention to Bain and how he both directs and drives the band.

There's so much to like here. The deep funk opening of "Responsibility" (a big dollop of New Orleans in that piano), leads to a rollicking tune on which the rhythm section gets to solo and strut their own stuff.  "Listening" opens in a lighter, airy, manner before the band kicks and the piece takes off in high gear.  Irabagon's solo rises above the frenetic rhythm section before Colligan steps out on his own. Play attention to how both the bassist and drummer connect with each other and the soloist, feeding off the energy the pianist supplies. I'm not sure they could play the main theme any faster and still be so melodic.

The album goes out with "Hope (Reprise)" picking up from where the earlier version faded out. Note the gospel figure in the piano, Irabagon's "testifying" saxophone, and the delightful finish.  "Embodied Hope" is a recording for listeners who wish to be transported out of the everyday.  Like the Jon Irabagon album mentioned above, the power of the music may overwhelm some but , stay with it, the ride is quite a treat.

For more information, go to www.andrewbain.org.