This Music Reaches Out & In 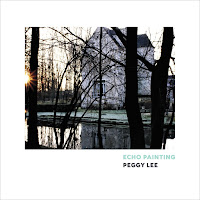 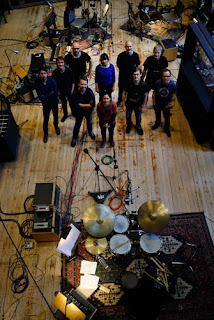 The album title gives the listener a good idea of what to expect.  Paintings can be mirrors, whether the artist is looking at a landscape, a lake, a lighthouse, a lover, or the madness of the world.  Echoes are sounds sent out, either in enclosed places or on mountain tops and, like paintings, they are an approximate replication of the subject, the notes on the page as performed, the sounds created by instruments when the musician is in improvisatory flight on her own or in response to the musicians around her.  Ms. Lee's "paintings" are performed by a group of her choosing, her friends (and, in the drummer's case, her husband) formed  in the echoes of Carla Bley and Charlie Haden's Liberation Music Orchestra.

Ms. Lee has been in the forefront of the experimental music "scene" for several decades, working alongside trumpeter Dave Douglas, composer and pianist Wayne Horvitz, and her own groups as well as writing for stage and dance performances.  In this ensemble, she makes sure all the musician are involved, whether on solos or in group interplay.

It's certainly fascinating to hear the various directions this music takes.  From the prayer-like "Incantations" that opens the album to the Charles Ives-like hoedown of the first half of "A Strange Visit" to the sweet sounds of "Painting Echoes" and its swirling brass, reeds, and violin, the attentive listener moves in and out with the musician, even breathing with the music.  The title track moves in on an insistent rhythm, with percussive cello and guitar creating a trance-like setting with the bass and drums - the horn melody moves slowly atop that foundation until Turner's trumpet lines take flight.  The subtle touch of blues and country music can be heard on "Silent Piece", reminding this listener of Robertson's music for The Band, the trumpet moving the melody along like the voice of the late Rick Danko rising out of the rich sonic background.

The album closes with "The Unfaithful Servant" - this version stays true to the 1970 original (the one that included the stunning soprano sax solo from Garth Hudson) with solos from guitarist Schmidt and trombonist Murray. Turner does a fine job of shadowing the vocal line on the final restatement of the melody, leading the rest of the brass and horns through the verses.  And, like the original, the piece does not really resolve.

"Echo Painting" serves to remind the listener of the power of group arrangements, of melodies that evoke images and memories, of how Peggy Lee can create arrangements where the solos are part of, not apart from, the fabric of the songs. Yes, there are few moments of improvised noise, frenzied playing that sound more like the madness of big cities than the cool reserve of the cover photograph.  Fascinating music from start to finish!

For more information, go to www.peggylee.net.