My father (1905-1988) used to remind me that, as one grows older, time moves faster.  We would argue with me being the rational one ("Impossible - time moves one second at a time at the same speed!") and he would counter with the irritating "You'll see what I mean soon enough."

Here we are at 2015, many of us lucky to live in democratic societies. Although surrounded by the myriad issues that the bedevil the "Social  Contract" and that the founding fathers hope to solve with the Bill of Rights and the Constitution, the United States often feels more "untied" than "united."  If I had the patience, I would argue with those who feel we are headed down the road to anarchy by pointing out that, in many ways, that is the main struggle of a "free" society - that "road" is always open and one must continuously endeavor to keep on moving forward no matter the cost.

Before these observations devolve into a screed, let's move on to music.  I honestly believe that 2014 was a great year for creative music, especially for the various styles that have its roots in the Black American experience (I'm avoiding the word "jazz" because it's too confining.)  If I had had the time, my "Best of..." would have swelled to close to 70 highly recommended recordings.  Yet, this music that has so absorbed me for nearly 5 decades is continually being pummeled in the press, marginalized by writers who find "jazz" out of fashion, and ignored by much, but not all, of the "mainstream" press.  Yet, I am hearing more music today created by people in their 20s and 30s who are creating fascinating voices and powerful sounds.  And, these women and men give me great hope, hope that life isn't just about making money, going along with the crowds, killing at the drop of a angry word, about the color of one's skin, the sound of one's voice, about the subjugation of one gender, trafficking and slavery - all of which has gone on since the dawn of recorded history and shows no willingness to disappear. Music can and often does serve as a refuge for its creators and audience while reminding us of how much still needs to be done in our communities, our state, our country and our world.  Change, like creativity, is always a daunting task and the freedom one hopes results from our actions is often fleeting - that does not mean we should stop trying. The world is ever evolving and we are hanging on for dear life. 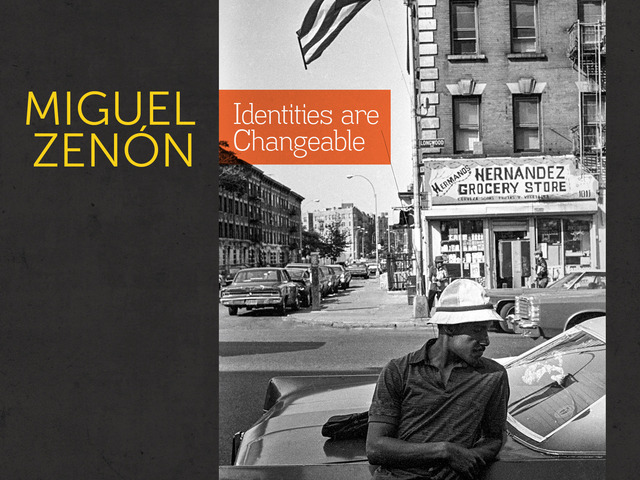 Much has been written about this new project of saxophonist and composer Miguel Zenon; "Identities Are Changeable" (Miel Music) is a continuation of and logical extension of the work the native of San Juan, Puerto Rico, has been creating over the past decade, that is exploring the musics and traditions of his native country.

Puerto Rico, discovered by Christopher Columbus in 1493, has been an unofficial part of and apart from the United States since the US invaded the island nation in 1898. Puerto Ricans became full U.S citizens in 1917 and there have been numerous attempts to assimilate its population into America, a strong nationalistic movement helped the island become an autonomous U.S.  Commonwealth in 1952 with its own constitution. There have also been movements to make the country the 51st State as well as its own independent country - read more at www.ushistoryscene.com/uncategorized/puertorico/ - and, at this point, there are more people of Puerto Rican descent living in the U.S. than on the island (information from www.pewhispanic.org/2013/06/19/hispanics-of-puerto-rican-origin-in-the-united-states-2011/).

In his travels around the United States, Zenon became fascinated in the dual identities of Puerto Ricans, that many of them who've lived in the States for several generations still retain the traditions of their parents and grandparents.  And, he was curious how these people dealt with racism and the fact that so many are dark-skinned. What he discovers through the interviews scattered throughout the recording, he then translates into a musical experience fed by the percussive fires that underlies Afro-Caribbean music (drummer Henry Cole provides the drive throughout and is, in a word, magnificent - kudos as well to the other longtime members of Zenon's Quartet, pianist Luis Perdomo and bassist Hans Glawischnig, for their impressive contributions).  Mix that with traditional Puerto Rican music, the African-American musical worlds that Zenon has travelled in throughout his career, the sound of Charlie Parker one often hears in the cascading notes from the leader's alto saxophone plus the impressive colors of the 12-man reed and brass section and you have an experience that is educational, transformative and highly entertaining. Many of the tracks include melodic phrases built from speech patterns of the interviewees and the musicality of the voices is interwoven into the fabric of the story.  The warmth of the arrangements, the often stunning solos from the leader, the different emotions that course through the program, makes this such an engaging experience.

Despite what one might read about the "makeup" of American society, this country is and remains a "nation of immigrants".  Many of those who came here for the economic opportunities, religious and personal freedoms that have been the underpinnings of this society have assimilated while others, due to the color of their skin or desire to retain ties to their cultural roots, have been pushed to the edges (a look around at this country shows us that, while much has changed and continues to change, "institutional" prejudices take many generations to overcome.) With "Identities Are Changeable", Miguel Zenon addresses these issues through the lens of his own upbringing, his journey to the United States and his experiences as a musician, husband, father and educator by making the experience universal and not about himself. Along the way, he creates music for his Quartet and Big Band that not only displays his continuing maturity as a composer/arranger and soloist but also makes for wonderful listening.

For more information on the composer and this project, go to www.miguelzenon.com/identities/mz_digital_booklet_identities_are_changeable.pdf.
To hear a live performance of some of the music on the recording, click on the following link:
www.npr.org/event/music/354587935/miguel-zen-ns-identities-are-changeable.