Trumpeter and composer Duane Eubanks, brother of Robin (trombone) and Kevin (guitar), is a busy musician and teacher, so busy in fact that, "Things of That Particular Nature (Sunnyside Records) is his first CD as a leader since 2001 (and only his 3rd in total!) The CD, all Eubanks originals save for Mulgrew Miller's "Holding Hands", features the splendid rhythm section of Mark Cary (piano, Fender Rhodes), the seemingly ubiquitous Dezron Douglas (bass) and co-producer Eric McPherson (drums). Sharing the front line is fine tenor saxophonist Abraham Burton plus vibraphonist Steve Nelson on 2 tracks.

There is plenty of drive in this music yet Eubanks does not skimp on melody.  His crisp brass work blends smartly with Burton's first-rate tenor sounds.  When Burton burst on the scene after attending both the Manhattan School of Music and the Hartt School of Music (where he worked closely with the late Jackie McLean), he was a "fire-breathing" player.  He still can still "light it up" but now has matured into a still forceful yet highly melodic voice.  He dances beneath Eubanks' trumpet on the ballad "Anywhere's Paradise" and takes a bluesy jaunt on "Purple, Blue, and Red." He shows a dash of "Philly Soul" (he grew up in Manhattan) on the funky "Dance With Aleta".  Cary is a forceful contributor, whether pushing the tempo on "Slew Footed" or dancing his way through "Holding Hands." Marc Cary's work is exemplary throughout, whether combining his phrases with Nelson on the ballad "Aborted Dreams" or racing through the changes on "Beer and Water" (which has strong echoes of the music of Art Blakey's Jazz Messengers). The pianist joined the project after the passing of Mulgrew Miller and, while very much his own man, gives the music the weight that the late Mr Miller certainly would have added.  His slinky Rhodes work, combined with the full tones of Douglas's bass and funky drums of McPherson, beneath the trumpet and sax on "Rosey" has the feel of the styling of the late Joe Zawinul with the Cannonball Adderley Quintet.

Duane Eubanks does not posit himself in the center of the music; instead, he creates a group sound in which each musician is an equal.  That approach works quite well, making the music sound human and not played by rote, showing heart and emotion instead of mere technical prowess.  "Things of That Particular Nature" swings with authority, shows some fine dance steps and is quite delightful.  For more information, go to www.duaneeubanks.com. 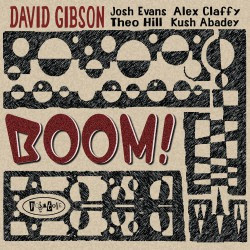 Trombonist and composer David Gibson has a new CD, his 6th as a leader and 3rd for Posi-Tone Records. With a title like "Boom!", one might expect the season to be a high-powered, "in-your-face", hard bop but, instead, this is a pleasingly nuanced set of (mostly) originals that finds Gibson leading an impressive quartet of young musicians including Connecticut native Josh Evans (trumpet), pianist/Fender Rhodes Theo Hill, bassist Alex Claffy (Ralph Peterson) and drummer Kush Abadey (Wallace Roney).

Like a number of Posi-Tone records, this session's music gives off the vibe of mid-1960s Blue Note Records.  There are several high-powered numbers, such as "The Cup Bearers" (composed by Tom McIntosh for an Lp of the same name released by trumpeter Blue Mitchell) and Gibson's "The High Road", tunes where Abadey's propulsion, Hill's muscular chords, and Claffy's active bass work leads the way.  Gibson's solos tend to be fairly mellow, phrases that are soaked in blue tones, while Evans' attack has a more forceful attack, not unlike Randy Brecker and Freddie Hubbard.  He can be mellow as well; he shows a softer side on the funky "Grass Fed" although the drummer "gooses him into the higher register at the climax of the solo.  That track, as well as "Empathy" and "The Dance", display the influence of Herbie Hancock, especially in the "floating" piano chords and elongated melody lines.  Pay close attention on "Empathy" to the work of the rhythm section as the "freedom" in their playing resembles the work of Hancock, Ron Carter and Tony Williams in the Miles Davis Quintet. Whereas, on the title track, one hears the funkier side of the band, not unlike the sounds of Hancock with Billy Hart or Robert Glasper with Chris Dave.

The program close with "Change the World", the ballad that Eric Clapton had a world-wide hit with the mid-1990s.  Gibson et al don't mess around with the handsome melody and his solo, the only one on the cut, cover a wide swath of sonic territory and is fairly emotional.  Again, the soloist locks in with the rhythm section, playing off their energy and cues.

This is one of trombonist David Gibson's "working" bands (one features organist Jared Gold, trumpeter Marquis Hill and drummer Anwar Marshall and another adds Evans and Abadey to Gold's great organ sound) and most of them are part of Josh Evans Big Band.  They know each other and it shows.  "Boom!" has heart, soul, funk and fire; this music belongs in your life!  For more information, go to jazzbone.org.

Saxophonist Johnny Griffith, a native of St. Bonafice (Winnipeg), Manitoba, Canada, has just issued his debut CD as a leader.  "Dance With The Lady" (GB Records) features 9 originals performed by Griffith (alto and tenor sax) with a splendid band including pianist Adrean Farrugia (Ernesto Cervini's band), bassist Jon Maharaj (Jamie Reynolds Trio), drummer Ethan Ardelli (Matt Newton) plus very special guest Jeremy Pelt (trumpet). The saxophonist met Pelt (who now is on the faculty of the Hartt School of Music in CT) several years and invited him to join his band.  Listen to tracks such as "The Kuleshascope" (named for Canadian composer/educator Gary Kulesha) and the blues-drenched "Princess Aura Goes to Phrygia" (the title comes from the composer's favorite movie "Flash Gordon") and you can hear how much a part of the band Pelt is.  "Syrah" is named for one of the important grapes of the Rhone region of France (also grown in British Columbia) - here, it is a medium-tempo ballad that has a gentle melody but a harder edge in the rhythm section.  Ardelli can be a firebrand, his cymbals splashing through the pieces - his active snare work stands out on several tracks as well as his interactions with the soloists, especially Farrugia.

Griffith writes that "Cinders" was inspired by Prokofiev's music for the ballet "Cinderella"; while there is no overt "classical" connection, the music glides atop the active rhythm section with excellent solos for the leader, Pelt, and Maharaj (pay close attention to how the pianist moves the music forward and "frames" the melody).

The program opens with the swinging "The Zissou Predicament" (good possibility this is another movie reference, this time to Wes Anderson's 2004  "The Life Aquatic With Steve Zissou") and closes with high-energy "That Night..(Under The Bench)..So Long Ago" - the latter track also has a "sharp" swing element and each solo starts with a subtle shift in tempo, heading quickly back to full speed. One of the joys of this recording is that each time you listen, not only do you hear a new twist or turn but also you can hear how important each player is to the overall sound. No one is playing it safe.  Kudos to Toronto-based sound engineer Stew Crookes who gets a great "live" sound from the Quintet,  Of course, this is a band that should sound super in a fine performance space.

"Dance With the Lady" grabs the listener from the first note and keeps one's interest until the last note of the alto sax on the final cut. Johnny Griffith and company do not blaze new musical trails but they make music that sounds fresh and exhilarating. For more information, go to johnnygrifith.com.
Posted by Richard B. Kamins at 10:44 PM