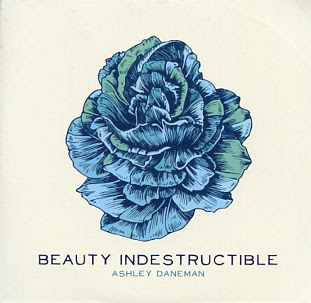 The joy of discovering a new voice is how the power of what he or she does with his or her music can alter the listener's life.  On January 20th, Ashley Daneman releases "Beauty Indestructible", her second album (but first to spotlight her work as a composer, singer and arranger), a stunning personal statement filled with strong melodies, lovely harmonies and the promise of redemption.  Several years ago, the artist was diagnosed with PTSD and worked very hard to overcome the stresses that it put on her and family. This music is a celebration of life, of how music can heal and how one can begin to make a difference in the lives of others.

Ms. Daneman has written that she grew up listening to Joni Mitchell and Ella Fitzgerald; one can hear traces of both those artists on these tracks but much of this music reminds me of Laura Nyro.  The blend of pop, rhythm 'n' blues and jazz that permeates pieces such as "How You Got to Yes", "Think on Whatever Is Lovely" and the title track is dramatic yet intimate. The playfulness of "This is Somebody Else's Piano", with its poppy bouncing rhythms, overdubbed choir of trumpets and sprightly vocal is great fun.  Kudos to her band, especially the splendid percussion work of Michael W. Davis, the subtle keyboards of David Izard and the solid foundational work of bassist Sam Weber.   Add to those voices the contributions of cellist Amali Premawardhana, guitarist Matt Davis and the singer's husband Benje Daneman on trumpet and this music has plenty of color.

But, what truly makes this music stand out is Ms. Daneman's voice and presence. Her assured singing, the smart vocal overdubs and the soulful quality of her delivery fills the speakers, spreading through the room and pulls you in.  "Sing ('til You're Good and Live)" has the power of a Stephen Sondheim composition, the singer telling us how music helps one to conquer fears, sorrow and the pain life can bring.   Later in the program (the penultimate track), she sings "You say to the dark/ you are tired of these things you've had to bear/ and now you want to go/ where no one's ever lost", you hear how her life has been affected by her illness but you don't hear pity or remorse, no sadness.  The deep tones of the cello over the moaning guitar chords have more of a "country" feel than blues while the chorus of voices rising above the rhythm section has gospel overtones.

With "Beauty Indestructible", Ashley Daneman has created a profound work of art that is so alive, so positive, and so blessedly musical.  Go to www.ashleydaneman.com and see what else she is doing with this music, asking for stories of inspiration to help people who may have lost hope.  In a world which often seems to be growing harsher by the day, Ms. Daneman, through her music and her project, shows us there can also be brightness and optimism. Also, several of these songs can easily get stuck in the soundtrack of one's day and that is very good.

Enjoy "This is Somebody Else's Piano" and check out Ms. Daneman's Bandcamp page:

By the time pianist William "Red" Garland made the trip to San Francisco's Keystone Korner for the week of gigs with bassist Leroy Vinegar and drummer "Philly" Joe Jones in December of 1977, he was 2 decades removed from his fine work with Miles Davis and 12 years into a semi-retirement.  Garland had returned to his native Dallas.Texas, in 1965 to care for his ailing mother, rarely leaving the state to tour or even perform.  He has recorded sporadically and would again over the next few years after this week of gigs.  He passed away in April of 1984, 3 weeks shy of his 61st birthday.

"Swingin' on the Korner" (Elemental Records) is a wonderful addition to Red Garland's discography.  This 2-CD set, the only time this trio of musicians ever played together (Jones and Garland, along with bassist Paul Chambers, were the rhythm section for Davis from 1955-58), should serve to introduce Garland to a new audience while reminding long-time listeners what a classy and talented pianist he was.  Both discs are filled with strong ballads and several swinging surprises (I love the shuffle rhythms of Monk's "Straight No Chaser", emphasizing both the blues and swing inherent in the piece.)  Given the time of year when the recording was made, there is a lovely reading of Mel Torme's "The Christmas Song", so sweet and low (Jones's work is quite subtle here). The playfulness of "Autumn Leaves" (an uptempo reading with an irresistible walking bass line), the skipping rhythms of "On A Clear Day" (Jones take a long, ebullient, solo as befits his personality), the bounce of "Bag's Groove" (Garland really digs into his solo, delightfully interacting with the rhythm section), and the melodic sweep of "It's Impossible" makes for such enjoyable listening.  Garland is certainly energized by Vinnegar and Jones plus one can hear the audience enjoying every minute.

The music on this package is culled from the "board" tapes of the week saved by Keystone Korner owner Todd Barkan (he ran the club from 1972-83 and is co-producer of this set).  The sound quality is quite good (especially the sound of the drums) and the booklet features essays from the producers, from Nat Hentoff, pianist Benny Green, interviews with Don Schlitten, Ira Gitler and Kenny Washington plus a reprint of 1979 essay written by Doug Ramsey.  Even with all that and the photographs throughout the booklet, it's the music that will bring you back time and again. Red Garland was a pianist whose musical choices ranged from Broadway to pop tunes to jazz standards and more. He loved melody, the blues and rarely if ever overplayed. The way he moves from two-handed readings of the melody to exciting single-note runs not only demonstrates that his "chops" were in fine shape but also that his musical mind was as facile as ever.   Listening to these 16 tracks, it's also clear he enjoyed playing with Messrs. Vinnegar and Jones.  "Philly" Joe, in particular, sounds like he's having a blast.  If you like piano trio music, "Swinging' on the Korner" sounds fresh, lively and downright joyous.  For more information, go to elemental-music.com.