First, a confession - up until "Tales of the Unusual", the new CD from vocalist/composer Lorraine Feather crossed my desk, I had never heard her music.  Knew the name, knew she was the daughter of critic/composer Leonard Feather (1914-1994) and that was all.

In the past few weeks, rarely a day has gone by without listening to most or all of this wonderful recording.  The music she has produced echoes in my ears all day, snatches of melody or swatches of lyrics get repeated with glee and, possibly, madness.

13 songs, 13 stories and not just any kind of song or story.  In the past, Ms. Feather wrote lyrics for songs by Fats Waller (2001's "New York City Drag") and Duke Ellington (2003's "Such Sweet Thunder") - her past 2 CDs, "Languages" and "Ages", have featured new works by collaborators such as Russell Ferrante. Eddie Arkin, Shelly Berg, her husband Tony Morales and others. Those 4 composer/arrangers appear on "Tales of The Unusual" (Jazzed Media) plus Ms. Feather adds lyrics to works by Enrico Pieranunzi, Duke Ellington, Edvard Grieg and Nino Rota.

The opening track, "The Hole in the Map", tells the true story of Amazonian explorer Percy Fawcett (who disappeared on a journey to the river in 1925.  At the onset of the piece, the music, by Ferrante, has a Romantic classical feel but soon the rhythm section of Michael Valerio (bass), Michael Shapiro (drums, percussion), and Grant Geissman (guitar) fall into a seductive blend of jazz and South American rhythms.  Add to that mix the evocative violin of Charles Bisharat (whose splendid playing serves as a counterpoint to the voice on 8 of the tracks) and the listener is transported to a surreal yet utterly possible world.  My initial reaction to this recording was that the project sounded like an extension of Steely Dan's 1977 classic "Aja" but with more concentration on the lyrics.  In fact, the song "Out There" (music by Shelly Berg) seems to be based on the break of that Lp's title track that leads to Wayne Shorter's solo over the brilliant drumming of Steve Gadd.  Eddie Arkin's music for "Sweet Miriam" has the feel of a Yiddish Theater piece (a glorious blend of vaudeville and Eastern European harmonies); one of the sweeter touches on the track is how Valerio's bowed bass plays the melody line that Ms. Feather is singing.  Berg's country-jazz hoedown music for "Get a Room" sets the pace for a humorous look at an "odd couple" (certainly the first song that features a rhyme that pairs "I don't care whose cage I'm rattlin'/This isn't a matter of left and right/like Jim Carville and Mary Matalin".) In "The Usual Suspects", there are such sweet lines as "I told the guy to get ready to spill/Like the Exxon Valdez" and later on, Ms. Feather rhymes with "3 card-Monte" with "Richard Conte."  Geissman's bluesy guitar licks and Ferrante's barrelhouse piano is a perfect fit for this tale of a criminal who fades into the background. Ms. Feather had recorded "Indiana Lana" with a large ensemble on her 2005 "Dooji Wooji" CD - here, it's just her and Shelly Berg (using Duke Ellington's 1939 composition that gives the CD its title - oops, check the comment below from Ms. Feather) telling the tale of a young woman who was a world-class runner who could only compete against motor cars.

Honestly, there's not a weak track on this recording.  Ms. Feather has a supple voice with a wide range, never forces the pace, her witty lyrics often bringing a chuckle or smile - yet, there are songs like "Ahh" (music by Nino Rota - her overdubbed harmonies bring Harry Nilsson to mind) and "Cowbirds" (music by Ferrante adapted from Grieg) that have a serious side, with stories that make you pay close attention.  Lorraine Feather and her musical compatriots have paid great attention to their craft and the results are quite satisfying.  "Tales of the Unusual" is a true beauty! - for more information, go to www.lorrainefeather.com. 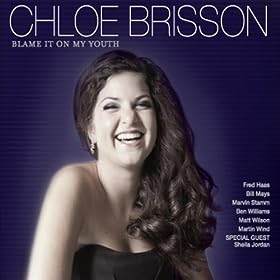 "Blame It On My Youth" (self released) is the second CD from Chloe Brisson, the 17-year old vocalist from New Hampshire.  She recorded her debut CD, "Red Door Sessions", when she was just 13 - since then, her impressive alto voice has gotten deeper, fuller and more expressive.  Tenor saxophonist and arranger Fred Haas organized a top-notch band to join Ms. Brisson in the studio.  The rhythm section consists Bill Mays (piano), Martin Wind (bass) and Matt Wilson (drums) plus solo and background work from Marvin Stamm (trumpet) and Ben Williams (trombone).

The program is a good blend of recognizable standards and several intelligent covers.  The CD opens with "Send For Me", a "jump blues" composed in the 1940s by Ollie Jones.  Wilson and Wind push the tempo, the arrangement prominently features the horns, and Ms. Brisson has fun with the lyrics.  She does not over-sing, no vocal gymnastics; for her, the words are quite important and she wants to make sure you can hear them.  Her lovely version of the title track has strong solos from Haas and Wind, lovely brushes work from Wilson (he can really swing softly) and a handsome vocal.  She swings the daylights out of Canadian songwriter Sharada Banman's "So Long, You Fool" (covered in 2007 by Sophie Millman) and caresses the lovely, soulful, "Aretha" from the pen of Rumer.  That latter track, along with her fine duet with Bill Mays on the Gershwin's "Someone to Watch Over Me", are the best cuts on the CD.

Sheila Jordan, a mentor to the young vocalist, appears on the sprightly, New Orleans-inspired, version of "I'm Gonna Sit Write Down and Write Myself a Letter" that closes the program.  Their playful conversation in the middle of the piece conveys their genuine friendship; Ms. Jordan sounds quite pleased to be singing alongside Ms. Brisson and the feeling is mutual.  Might strike some as "cutesy" but they really are having a good time (as is the band, which swings with great zest.)

Chloe Brisson's sophomore release has much to offer fans of jazz vocals.  One imagines that, as she continues to explore the possibilities of the world of music as well as continues to study and work with great musicians like Fred Haas, Matt Wilson and Bill Mays, her music will grow exponentially. She's definitely got the "voice" and the desire - it's going to be fun to see where Chloe Brisson goes.  For more information, go to chloebrisson.com.

Flutist Holly Hofmann has been working with pianist Mike Wofford since she moved to San Diego, California, in the late 1980s, eventually marrying him in 2000.  She's recorded with her husband as well as pianist Bill Cunliffe and issued a 3-flute recording with Frank Wess and Ali Ryerson.

"Turn Signal" (Capri Records) features the wife-and-husband with a Quintet that features Terell Stafford (trumpet, flugelhorn), Rob Thorsen (bass) and the fine drumming of Richard Sellers (who works with Thorsen in the San Diego-based quartet Ruby Blue.) Wofford's "The Dipper" (for Horace Silver) is a sweet ballad - the blend of Ms. Hofmann's alto flute and Stafford's trumpet is smooth and musical while Seller's steady hand keeps the music percolating.  It's alto flute and flugelhorn in harmony on the opening of Vince Mendoza's "Esperança".  Again, Seller's sparkling percussion makes the song stronger.

The music catches fire on a blazing reading of Bobby Watson's "Karita".  Stafford's solo is so musical, so warm, swinging with a purpose (love the reference to "If I Only Had a Heart") and setting the stage for Ms. Hofmann's fine solo.  The flute and trumpet sit out as the rhythm section does a soulful reading of baritone saxophonist Richard Twardzik's "The Girl From Greenland", which has a melody line that sounds somewhat like Roger Waters' "Just Another Brick In The Wall" (you can also hear it in Thorsen's walking bass lines). The closing track, "M-Line", features a fiery interchange between flute and drums.  It's also great to hear how Stafford and Sellers interact during the trumpeter's solo.

Mike Wofford and Holly Hofmann (and their cohorts) have created a "joyful noise" on  "Turn Signal".  The music is well-played, intelligent, soothing, swinging and worth your time.  For more information, go to hollyhofmann.com.