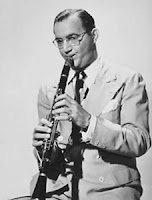 Jazzhaus, the label based in Berlin, Germany, is beginning a new series of releases culled from "audio and video jazz programs taken from live radio and television recordings from the archives of Südwestrundfunk Stuttgart, Baden-Baden and Mainz in south west Germany." If you go to the website - www.jazzhaus-label.com - you'll get the entire story. The exciting news for jazz fans is that there is going to an incredible amount of live music hitting the streets in the next decade and beyond.

The first releases are here and include (for this review) music from the Benny Goodman Orchestra (pictured), the Cannonball Adderley Quintet and the Gerry Mulligan Sextet.  The Goodman CD is from the label's "Big Bands Live" series and finds the great clarinetist recorded in October of 1959 with a 10-piece band plus vocalist Anita O'Day. It's quite a band featuring Red Norvo (vibraphone), Russ Freeman (piano), Jack Sheldon (trumpet), Flip Phillips (tenor sax), Bill Harris (trombone), Jerry Dodgion (flute), Jimmy Wyble (electric guitar) and the relatively unheralded yet solid rhythm section of Red Wooton (bass) and John Markham (drums). Goodman sounds quite lively, with a handsome tone, on his solos, especially on the faster tracks such as "Air Mail Special" where he, Norvo, Phillips, Harris, and Sheldon take good solos (but no guitar - odd considering the piece was co-written by Charlie Christian.)  Same soloists on the ensemble's romp through "Breakfast Feud" which also features plenty of punch from the bass and drums.

Ms. O'Day adds her smooth and sassy vocals to several tracks, including a pleasing romp through "Honeysuckle Rose" which opens with just voice and "walking" bass from Wooton.   When the band enters, the tune features nice give-and-take with the reeds and brass. A bluesy take on "Come Rain or Shine" follows - O'Day shows off her jazz chops especially on the first half of the track where it's just her and pianist Freeman.  Even better is the Earl Bostic blues "Let Me Off Uptown" where she has a sweet call-and-response with trombonist Harris and then shares the vocal with Sheldon (who's already in the "bopster" persona he was well-known for.) Her best moments come on the medley of "Not For Me", Jimmy Guiffre's "Four Brothers" (where she trades lines with Phillips) and improvises a "Blues" (in B-flat).

Goodman displays his sweeter side on "Memories of You" and then lets Norvo and Wyble have the spotlight on "Don't Get Around Much Anymore." Harris and Phillips get in some serious "blowing" on "Ten Bone", sparked by the fine drumming of Markham.  The 6-song "Medley" that closes the program brings out the entire ensemble (save for the vocalist) for a piece that starts off swinging gently on "Stompin' At The Savoy" but 5 minutes in, switches over to a "jump" blues beat a la "Sing Sing Sing" with melodic references to "Bei Mir Bist Du Schoen" and other pieces.  Goodman's woody tones dance above Markham's pounding floor toms before ceding the spotlight to the drummer. It's a splendid finish to a joyous 76-minute program.

There are some sonic issues (solos starting off microphone, buried vocal lines) but this is a spirited set of songs.  If you like melodic swing, this one is for you.

The Cannonball Adderley Quintet "Live in Liederhalle Stuttgart March 20, 1969" is one of the last tours that pianist Joe Zawinul made with the band.  He has already recorded with Miles Davis for the "Bitches Brew" sessions and would soon hook up with saxophonist Wayne Shorter to form Weather Report.  Yet, he is having a great time pushing the fine rhythm section of Victor Gaskin (bass) and Roy McCurdy (drums) to create a funky yet free wheeling cushion for the brothers, Cannonball (alto sax) and Nat (trumpet).  The Quintet bursts onstage with the pianist's fiery "Rumpelstiltskin" and then goes right "down home" for Nat's "Sister Emma" - Zawinul's piano has a New Orleans-feel, especially in his fills behind the solos and his very funky solo.  Cannonball has the spotlight for the sweet take on Leonard Bernstein's "Somewhere" and then leads the band back to the "funk" for "Pops" Staples' variation on "Watermelon Man" titled "Why Am I Treated So Bad."  Zawinul is on electric piano, displaying the style that he would bring to the synthesizer in the coming decades.

If you've ever heard any of Cannonball's live recordings, you know that the programs his band performs are an eclectic mixture of jazz, blues, funk and humor (Nat's vocal on "Oh Babe" is a bit "over the top"). The sound quality is uneven (voices get buried) but one should be impressed by the work of the fine rhythm section.  By the time the Quintet breaks into Nat's "Work Song", you'll be hard-pressed to wipe the smile off your face.

At the time that Gerry Mulligan brought his Sextet to Germany where SWR recorded them live at "Liederhalle Stuttgart November 22, 1977", he had been a professional musician for over 30 years.  In the late 1940s, the baritone saxophonist with the smooth tone had worked with Gene Krupa's Band, the Claude Thornhill Orchestra, and worked with Miles Davis on "The Birth of the Cool."  Several years later, he toured and recorded with trumpeter Chet Baker (in a piano-less quartet, a rarity in those days), a relationship that ended (on a regular basis) when Mulligan got busted in 1953.  After he was released from prison, he began a working relationship with trombonist Bob Brookmeyer that would culminate in the Mulligan Concert Jazz Band.  He remained a busy sideman (he had a long and fruitful relationship with pianist Dave Brubeck) and leader the rest of his life (he passed in 1996), studying classical chamber music, recording more big-band music ("The Age of Steam", released in 1971, remains required listening) and touring with smaller ensembles.  His discography features Lps with Ben Webster, Thelonious Monk, Lee Konitz and Johnny Hodges.

For this tour and recording (issued under the rubric of "Legends Live" as is the Adderley Quintet CD), Mulligan is flanked by vibraphonist Dave Samuels (fresh off his experience with Spyro Gyra), Thomas Fay (piano), Mike Santiago (guitar) and the veteran rhythm section of George Duvivier (bass) and Bobby Rosengarden (drums). The same group recorded the Lp, "Idol Gossip", for the Chiaroscuro in 1976 and 3 of the pieces from that recording are performed here.

Mulligan was a composer and performer who rarely, if ever, rested on his laurels.  The set opens with "For An Unfinished Woman", a piece he first recorded with Brubeck and Paul Desmond in 1971. The tune has a mesmerizing bass line and rhythm with solos from all.  "Line for Lyons" is a composition from 1952 Mulligan composed for his ensemble with Chet Baker.  A fairly straight-forward blues, Samuels sits this one out but everyone else gets a solo.  The leader's emotionally rich solo on "My Funny Valentine" is one of the highlights of the concert and recording.  Another lovely piece is Mulligan's "Song For Strayhorn";  the intricate mix of piano, vibes and baritone allows room for all to interact.  The program closes with a rousing reading of the leader's "K-4 Pacific", named for the train he rode out in California.  The music speeds up, slows down, speeds up again, throughout the musical journey. Everyone solos before all is played and done.  Kudos to the excellent rhythm section who never lose their way, giving the necessary support and the occasional push.

Gerry Mulligan had a long, productive, career. His baritone work brings to mind the fluidity of Harry Carney (of the Ellington Orchestra) and points the way for the expressive work of Hamiett Bluiett, Gary Smulyan and others.  His ability to adapt his works to different ensembles (from quartets to big band to symphony orchestras) illustrates his creativity and forward thinking.  This live set is well worth your time.

I can't wait to hear what else Jazzhaus has in the vaults but, for now, these are 3 satisfying recordings.