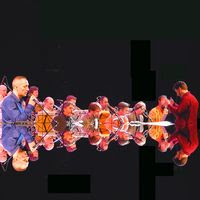 The John Hollenbeck Large Ensemble played last night 2/18) in the Buckley Recital Hall at Amherst College - thank heavens the ceiling is so high for the energy of this group might have brought the roof down.  18 musicians (including vocalist Theo Bleckmann) plus conductor JC Sanford brought Hollenbeck's complex music and arrangements (a lovely take on Jimmy Webb's "Wichita Lineman"  was the only non-original) to life.  The front line featured 5 reed players - Chris Speed, Jeremy Viner, Ben Kono, Dan Willis and Bohdan Hilash - all of whom played multiple instruments.  Behind them, the trombones of Mike Christenson, Jacob Garchik, Rob Hudson and Alan Ferber gave the music depth while the trumpets of Dave Ballou, Tony Kadleck, Jon Owens and Laurie Frink provided power and, at times, a fascinating palette of swirling colors. Bassist Kermit Driscoll (electric and acoustic) served as timekeeper and also played melodic counterpoint - his flying finger work on "Perseverance" was mighty impressive. Patricia Franceshy played vibraphone, marimba and other percussion while pianist Red Wierenga made his debut with the JHLE (and is joining the Claudia Quintet for its upcoming tour).

What stands out for this listener is how the compositions are so well-drawn, how the soloists work within the composer's challenging frameworks, how Bleckmann's voice (and sonic manipulations) rise above the ensemble often serving as an adjunct member of the reed section and, most of all, the conversations within the songs.  No trumpet solos last night; still, the 4 trumpets were an integral part of each piece.  Often, the "bottom" of the music belong to the trombones and Hilash's bass clarinet. The juxtaposition of Ben Kono's flute with the tenor work of Speed, clarinet of Viner, and soprano sax or English horn of Willis intrigued and pleased - there were several sections during which Bleckmann and Kono sang/played the same melody line. Wierenga's piano work was inaudible during the louder moments but, on the quieter pieces, was the important foundation and melodic voice.  As for the leader, he is more than the "pulse" of the band, often involved in the musical dialogues as another voice, sometimes as the transition between sections, never overplaying.

As wonderful as this music is on CD, the pieces take on new life in person.  Following the music as it moves through its various sections, as conductor Sanford cues the band or stands back for solos (he even crouched as Willis and Speed roared back and forth at each other, and as Bleckmann beautifully sang the words to "An Irish Blessing", the listener loses track of time and place.  Music should transport us; often, it beats us down with volume or tricks us with insincerity.  The John Hollenbeck Large Ensemble raised questions, pushed hard against any expectations, made me laugh, and touched my soul.  Considering the size of the ensemble and the availability of the musicians (incredibly, 10 of the 18 musicians on stage were on the JHLE's 2005 debut CD), the group does not do many live shows.  If you see a listing for them, do not hesitate to obtain tickets.  For more information, go to www.johnhollenbeck.com.

Had the opportunity to meet and chat briefly with Earl MacDonald, composer, arranger, and currently Associate Professor and Director of Jazz Studies at the University of Connecticut. He's a very busy person yet finds time to write a highly informative blog.  Check him out at earlmacdonald.com and find his fine blog at everupandonward.blogspot.com/.