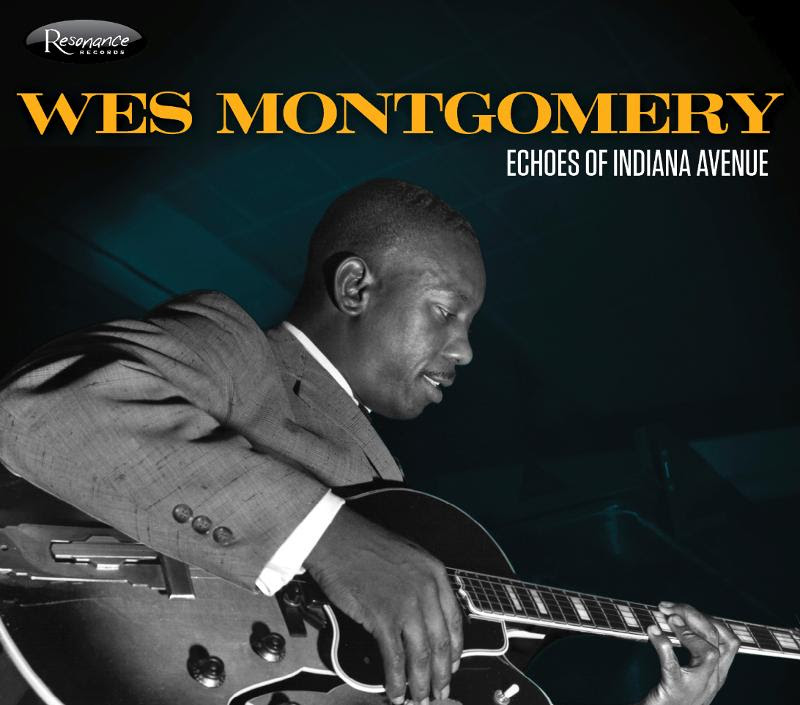 Guitarist Wes Montgomery (1923-1968) left Indiana at the age of 25 to join the Lionel Hampton Band, playing electric guitar in the style of his main influence, Charlie Christian.  Such a clean, clear, tone, such articulated notes - it wasn't until later that he began to play in the "octave" style that became his trademark.  After several years on the road, he returned home to form a trio with his brothers Monk (bass) and Buddy (piano), all the time holding down a full-time job. He and his brothers released several Lps for the Pacific Jazz label in 1958 but, when the guitarist signed with Riverside Records in 1959, his star began to rise. Subsequent recordings with Verve and A&M Records moved him into more commercial territory and, at the time of his passing (from a heart attack), Montgomery was one of the best-selling jazz artists in the world.

"Echoes of Indiana Avenue" (Resonance Records) hearkens back to Wes Montgomery's Indianapolis days and nights.  The tapes, made in 1957 and 58, are a blend of studio and live tracks (several from the splendidly named Hub Bub Club), were offered to Michael Cuscuna (of Mosaic Records) and he mentioned their existence to Resonance Records owner George Klabin.  With the aid of producer Zev Feldman, the label purchased the digital transfers, did a slew of research (great booklet!) and, on March 6, the music will excite jazz fans the world wide.  Among the musicians featured are the Montgomery Brothers, bassist Mingo Jones, pianists Earl van Riper and Melvin Rhyne (who plays organ on 1 track as well) plus drummers Sonny Johnson and Paul Parker. The majority of the material is jazz standards, ranging from "Round Midnight" to "Take The A Train" to "Misty" to "Body and Soul" - Wes is in fine form throughout, whether blasting through the changes on "Straight No Chaser" to a Buddy Guy-like "nasty" solo on "After Hours Blues." The "octaves" show in several solos but, much of the time, his single-note runs show his wonderful versatility and good taste.  He never sounds rushed or timid  -by this time of his career, he was in total command of his instrument.

Great package, fine music and a guitarist in his prime, "Echoes of Indiana Avenue" is more than collector's item.  Go to www.resonancerecords.org and check out the video. 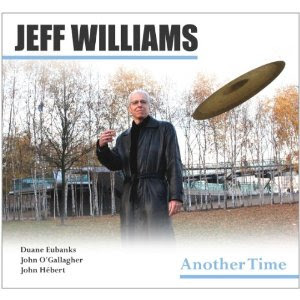 Drummer Jeff Williams first came to critical attention in the early 1970s as a member of both Lookout Farm (with Dave Liebman and Richie Beirach) and his work with Stan Getz.  Since then, he has worked in the US and abroad, is currently teaching in England and continued to study his craft as a percussionist and composer.  "Another Time" (Whirlwind Records) is his 3rd release as a leader and first since 1997. The recording features his "New York Quartet" composed of Duane Eubanks (trumpet), John O'Gallagher (alto saxophone) and John Hébert (bass).  As you might imagine by the instrumentation, the influence of Ornette Coleman can be felt in this music but does not overwhelm it. What the listener comes to understand is that Williams plays to the strength of his collaborators, all of whom bring myriad influences to the project.

Williams leads the way throughout, whether it's opening tracks (as he does on "Search Me"), creating a ever-shifting pace (such as the one on Hébert's "Fez") and his ever-so-quiet work on O'Gallagher's "Go Where You're Watching".  The musicians seem so comfortable with each other, no one overplays, solos flow organically from the "heads" or are influenced by the previous solo.  Among the highlights is Eubank's ballad "Purple, Blue and Red" - the piece has tempo changes built into both the theme sections and during the solos.  The music has an open feel and the soloists play off the interactions of the rhythm section.   It's fun to hear Hébert's bowed bass beneath the sparse melody line at the onset of the title track which then leads to a medium-tempo piece. O'Gallagher's intense, probing, solo follows the more introspective work of Eubanks, all the while the rhythm section adjusts to the emotional movement of the front line.

"Another Time" is mature creative music, not so sober as to be uninteresting but playful and rhythmically involving.  The compositions are strong without being stultifying allowing the players to move easily in and around each other.  The more one listens, the better the music sounds and feels.  To find out more, go to www.willfulmusic.com. 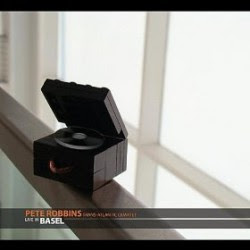 A strong sense of playfulness inhabits the new CD from Pete Robbins Transatlantic Quartet.  "Live in Basel" (Hate Laugh Music) features the Brooklyn-based alto saxophonist-composer with a group he first played with in Copenhagen, Denmark.  Joining him is Danish guitarist Mikkel Ploug, Irish-born electric bassist Simon Jermyn and Canadian-born drummer Kevin Brow. Robbins wrote all the pieces but the music has a lived-in quality; there's a sense that the quartet has played these pieces a number of times.  For instance, there's a long bass intro to "There There" that suddenly yet easily drops into the main theme.  The way the guitar gently moves beneath the saxophone on the verse and then pushes against him during the solo while the rhythm section also push and probe makes for great listening.  The quiet coda at the end of Robbins' solo sets the stage for Plough's contemplative spotlight.  Brow and Jermyn solo together to bring the piece back to the theme.  Then, there's the yin-yang, "push me, pull you" feel of "Inkhead" - the intense drive of the rhythm section gives Robbins quite a boost for his solo while Ploug's section starts and stays quiet for several minutes before the intensity builds.  "The Quiet Space Left Behind" is a fine ballad that features a pleasing bass solo and a long, well-constructed solo from the leader.  Nothing is rushed nor is there a fancy arranged, just a well played piece.

There's no secret formula to the success of "Live In Basel"; Pete Robbins has created a book of pleasing melodies, there is an excellent rhythm section plus solos with power, thought and are well-shaped.  Judging by the results of this recording, this Transatlantic Quartet is worth traveling to see play live.  For more information, go to peterobbins.com.