Since the beginning of November, Connecticut has been blessed with a delightful week of Indian Summer (soon to depart in favor of the chill of late Autumn).  The balmy temps (68-77) have allowed this writer to walk every day and to listen to music as I dodge the remaining leaves. The two albums have been in rotation each day! 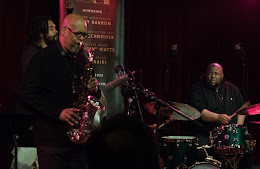 Earlier this year, drummer and composer Tyshawn Sorey issued a trio album––"Mesmerism" featured bassist Matt Brewer and the splendid young pianist Aaron Diehl on an exciting and thoughtful exploration of "standards".  In early March of this year, Sorey brought Diehl, bassist Russell Hall (Joey Alexander), and special guest Greg Osby (alto saxophone) to New York City's The Jazz Gallery for a five-night engagement. The band did not rehearse and, pretty much, chose the music on the bandstand.  And, they recorded every set! 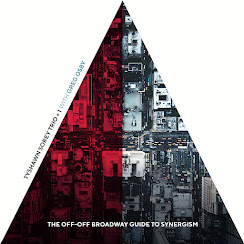 The results can be heard on "The Off-Off Broadway Guide to Synergism", a fantastic three-CD package from Pi Recordings. The 19-tracks are split up into three sets, each album approximately 75 minutes long. Five of the tracks are repeated in subsequent sets (Mr. Osby's "Please Stand By", Ornette Coleman's "Mob Job", Thelonious Monk's "Ask Me Now", Johnny Green's "Out of Nowhere", and "Three Little Words" composed in 1930 by Harry Ruby and lyricist Bert Kalmar).  It's truly a delight to hear where these four players go with the music.  The "Set 1" take of "Three Little Words" starts with a long, impressionistic, piano solo, so slow and gentle that it takes a moment before you the drums and bass have entered. Mr. Osby plays with the melody as if rolling a fine wine across his palette. Slowly and steadily, the alto solo builds with the insistence of the rhythm section. The leader, who does not solo on the set, engages in conversations with the other musicians.  Diehl paints a fascinating solo first with the introspection he showed at the onset of the track and it becomes great fun to hear where he takes the piece goosed forward by Sorey and shadowed by Hall whose solo later in the track is quite playful and percussive. 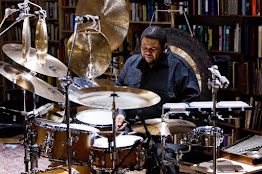 If you love improvisatory music, there is not a dull moment in this music. There's the beauty of Andrew Hill's "Ashes" (which Mr. Osby first recorded in 2000 on his "The Invisible Hand" album that featured the composer plus guitarist Jim Hall) as well as the saxophonist's unaccompanied introduction to Billy Strayhorn's "Chelsea Bridge"––listen below and notice the playful background work of bassist Hall and the beautiful work of Diehl. The pianist, at times, reminds this listener of Jaki Byard as well as Mr. Hill. The Trio + 1 swings mightily on both versions of "Mob Job" with the bass and drums leading the way. The second take of "Out of Nowhere" (originally recorded by Bing Crosby in 1931) opens with an expansive solo piano meditation before Mr. Osby enters with over the rippling piano, whispering cymbals, and bass counterpoint.  At the five-minute mark, the band kicks into a higher gear (but not out of control) with the alto and piano in conversation while the rhythm section dances about in support.
Every time one digs into the music of "The Off-Off Broadway Guide to Synergism", he or she can get carried away at the inventiveness of Tyshawn Sorey, Aaron Diehl, Russell Hall, and Greg Osby. The playfulness of the musicians on tracks such as "Jitterbug Waltz" (the track where one hears the inspiration of Jaki Byard in Diehl's piano solo) and the rip-roaring "Solar" is infectious and you can only imagine what is what being in the audience (unless you were). There are moments in each set where this quartet has the energy of the classic John Coltrane Quartet of the early-to-mid 1960s, the group with McCoy Tyner, Jimmy Garrison, and Elvin Jones. It's truly a delight to hear Greg Osby play with such imagination, power, and so melodically. Treat yourself to this great album!
For more imagination, go to www.tyshawnsorey.com. To hear more and buy this stunning set, go to https://tyshawn-sorey.bandcamp.com/album/the-off-off-broadway-guide-to-synergism.
Here's the Trio + Mr. Osby on Billy Strayhorn's "Chelsea Bridge": 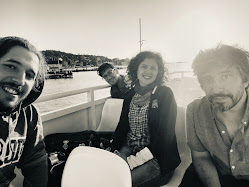 Clarinetist Anat Cohen first assembled the three musicians who would join her to form Quartetinho (pronounced "quar-te-Chin-yo and meaning "little quartet") before the pandemic stopped the world in its tracks.  James Shipp (vibraphone, glockenspiel, analog synth, percussion), Vitor Gonçalves (piano, accordion, Fender Rhodes), and Tal Mashiach (acoustic bass, guitar) join Ms. Cohen (who also plays bass clarinet) for their self-titled debut album (Anzic Records).  If you have followed the clarinetist's career, you know that she has had a long love affair with Brazilian music, recording with guitarist Marcello Gonçalves as well as Trio Brasileiro and the Choro Ensemble. 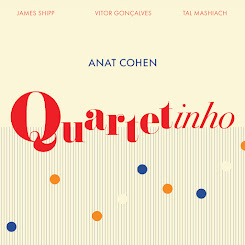 For its debut album, the "little quartet" treats the audience to an 11-song program that includes original pieces from the leader, Shipp, and Mashiach plus two pieces by Egberto Gismonti and one each from Antonio Carlos Jobim, the contemporary Brazilian composer Maria Do Carmo Barbosa De Melo (the lively "Boa Tarde Povo"), and Antonin Dvorāk's "Going Home".  The smashing arrangement of the last tune listed features accordion, vibes, bowed bass, and bass clarinet––it's a beautiful arrangement which during Ms. Cohen's solo takes a turn towards the blues.  Shipp's solo also takes the "blues route" with his sweetly expressed lines over the supportive bass and accordion swells.  Mashiach's "The Old Guitar" is a lovely ballad that leaves solo space for the leader as well as Gonçalves' sweet accordion sounds. The album opener, Shipp's "Baroquen Spirit", starts slowly with just clarinet, vibes, and a synth drone––the melody blends an Americana feel with a touch of classical music.
That first track leads directly into Egberto Gismonti's lyrical "Palhaço"––there are moments during Ms. Cohen's solo that, thanks to the bass line, piano chords, and the dancing vibes, the music resembles a Joni Mitchell song.  Also check the splendid piano solo (with Mashiach's supportive bass) that leads to the close of the piece. The other Gismonti piece, "Frevo", jumps atop the rippling clarinet and piano melody before the clarinetist takes a sly solo over Shipp's delightful percussion and the throbbing bass notes. The piano solo is also a treat.

Ms. Cohen contributes three originals to the program.  "Birdie" is a melancholy melody played over a medium tempo with the Fender Rhodes offering shimmering chords (see the video below).  Next up is "Canon" which starts with a richly melodic bass solo (there's a touch of flamenco in Mashiach's playing). The bassist then articulates the handsome melody supported by Shipp's vibes. Ms. Cohen joins on bass clarinet while Gonçalves joins on piano.  "Louisiana" pops right along on the thick bass notes, the dancing piano chords, and the "jump-blues" in the vibes solo.  Everybody solos but at 3:30, the music hardly overstays its welcome. 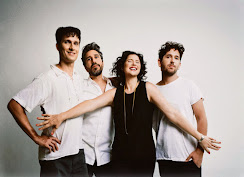 The album closes on Mashiach's "Vivi and Zaco" which he introduces on 7-string guitar. The accordion and vibes enters when the guitarist expands on the heartfelt melody. The piece has a lovely flow that often speeds up and slows down at the end of the verse.  Before the piece ends, everyone has shared the melody line.  It's a sweet close to an elegant group of songs.
"Quartetinho" is yet another jewel in the crown Anat Cohen is creating with her music.  Her heart is so enmeshed in her music and her love for playing shines through every performance.  With this quartet, culled from her Tentet, she has given listeners yet another reason to listen deeply.
For more information, go to www.anatcohen.com.  To hear more and to buy the album, go to  https://anatcohen.bandcamp.com/album/quartetinho.
Here's the Quartet live in the studio playing "Birdie":
Posted by Richard B. Kamins at 10:22 AM