Here's one of my favorite albums of Autumn 2022.

Pianist-composer-educator Noam Lemish, born in the United States, grew up in Israel, came back to the US for college, and now teaches at York University in Toronto, Canada, has created quite an intriguing musical career.  He studied and recorded with master percussionist George Marsh as well as contemporary classical composer/pianist W. A. Mathieu. The pianist has also recorded with Israeli oud player Amos Hoffman and is the co-leader of the Israeli-Iranian Musical Initiative (I=I).  His original music combines myriad influences, is intelligent and heartfelt and, up until this year, usually in a small setting (save for I=I). 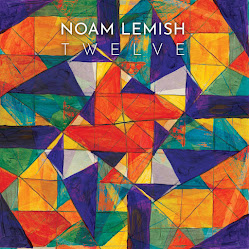 His latest album, "Twelve" (TPR Records), features a 12-member ensemble (13 on one track) that includes an impressive lineup of Canada's most exciting musicians. The six original pieces, all but two over 11 minutes, not surprisingly cover a wider swath of music of musical territory. One can hear the influence of Maria Schneider on the first track, "Song for Lia";  it's in the expansive melody, the use of wordless vocals, in how the solos (alto saxophonist Allison Au and guitarist Ted Quinlan) rise up out of the section playing, and the active but never intrusive rhythm section.  "The Nagila Mayster" is playful, rhythmically active, with intriguing call-and-response, and fine vibraphone work from Michael Davidson.  Listen below how the music evolves over 14 minutes, how Lemish arranges the various "voices" in the ensemble, slowly building the intensity, and not afraid to stop and start. After a slow and majestic "chorale" led by the brass augmented by the vibes, the tempo jumps up , slows down, and leads to the leader's delightful piano solo.
There are four more excellent pieces including the enchanting "Beethoven's 7th Visit to Romania"––that's quite a title yet the song is based on the theme from the Second Movement of the composer's "Seventh Symphony".  Besides the splendid melody, there's a lovely 13-voice choir, and a hardy trumpet (Jim Lewis) and tenor saxophone (Kelly Jefferson) duet. "Between Utopia and Destruction" draws its inspiration from two different Russian-Jewish melodies, one of which "Der Verter Un Di Shtern" dates back to World War II and was recently rediscovered in the Ukraine.  The two folk melodies are well-drawn and serve as stepping stones for powerful solos from both the leader (there are moments when the music swings in an Ellington mode) and soprano saxophonist Jefferson (several interesting tempo changes and returns to the melody during this section).
If you're like me and enjoy adventurous large ensemble music, go find "Twelve". Noam Lemish has created one of 2022's most delight-filled recordings.  The playing is crisp, the arrangements intelligent and thoughtful, and the melodies all stand out.  One cannot ask for more from an album other than one more like this, please!
For more information, go to www.noamlemish.com/noam-lemish-12tet. To hear more and to purchase the album, go to https://noamlemish.bandcamp.com/album/twelve.
Enjoy "The Nagila Mayster":
Songs and personnel: