Piano trios––piano, bass, and drums––have been a constant of American music since the 1940s, catching fire in the 1950s with the work of Ahmad Jamal (see below), Oscar Peterson, Hank Jones, Bud Powell, Bill Evans, and so on. They remain popular today thanks to the artistry of Jason Moran, Matthew Shipp, Brad Mehldau, Tord Gustavsen, Fergus McCreadie, and others including the gentleman below. 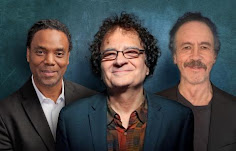 Pianist and composer Laszlo Gardony first recorded with bassist John Lockwood and drummer Yoron Israel in 2003 and five times since. Their sixth recording, the appropriately-titled "Close Connection" (Sunnyside Records),  accentuates the musicians' relationship on and off the bandstand. The trio reconvened in early 2022 after nearly two years of inactivity due to the COVID pandemic.  Professor Gardony (he's on the faculty of Berklee College of Music and Harvard University) brought in six original pieces and the Trio created another six collectively in the studio. 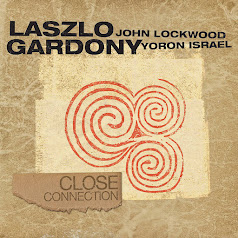 One of the most enjoyable facets of Gardony's music is how rhythmical many of his pieces are. The program opens with "Irrepressible", which roars out of the speakers with a melody inspired by Bela Bartok, Eastern European folk music, and the hard-edge funky swing of Chick Corea.  The pianist grew up in Hungary listening to Progressive Rock (Emerson, Lake, & Palmer, Genesis, Can) which one can hear in "Strong Minds" but this listener hears a touch of Black Sabbath in the "heavier" sections. The New Orleans roll of "Cedar Tree Dance" displays the danceability of this music––influenced by Black music, the Trio never lose the infectious feeling (listen to the piano under the bass solo).  "Times of Discord" builds off an eight-note descending piano rolling forward on Israel's powerful drumming and Lockwood's mighty bass lines. The drummer switches to the kalimba (African thumb piano) and hand percussion while Gardony picks up the melodica for the hypnotic "Savanna Sunrise", a gentle piece built upon simple phrases.
Six of the last eight tracks on the album are group improvisations. They are a varied and often fascinating collection of ideas, rhythms, and interactions.  Ranging from the tender, Abdullah Ibrahim-like, "Everybody Needs a Home" (a nod to bassist Lockwood's native land of South Africa) to the lovely, meditative, "Hopeful Vision" to the quiet interactions of "All that Remains" to the fiery "Night Run" (check out the swinging rhythm section plus the nod to the opening melody of Stravinsky's "The Rite of Spring") to the album closer "Cold Earth" (a rumination of the state of the world featuring splendid arco bass work), the music stands as a testament to the friendship of the Trio, to their fertile musical imaginations, and their intelligent interactions.
"Close Connection" will make you sit up and listen. Laszlo Gardony, along with Yoron Israel and John Lockwood, has created music that shines in the darkness that seems to envelop our world. Recorded as the pandemic still had its tight grip on this country and abroad, this music, even with several darker moments, brims with hope, joy, and fun!
For more information, go to www.lgjazz.com.  To hear more and to purchase the album, go to
https://laszlogardony.bandcamp.com/album/close-connection-2.
Hear "Strong Minds":
Looking for the perfect gift for the "jazzhead" on your Holiday shopping list, look no further "Emerald City Nights : Live at The Penthouse", two 2-CD sets from pianist Ahmad Jamal. The sets are the first releases on producer-historian Zev Feldman's new Jazz Detective label.  Feldman has built quite a reputation for discovering never-before-released music from the 1950s and 60s and releasing intelligently package albums for Resonance Records (he's also worked on several archival releases for Blue Note).  His work not only features music but also interviews with many of the musicians involved in each project as well as with writers, presenters, and others who give great insight on each project. 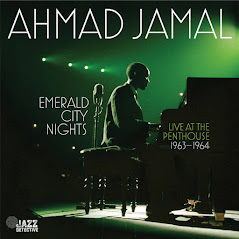 The first two CDs from the Seattle, Washington nightclub, are subtitled "1963-1964" and feature one session recorded in June of 1963 while the other has selections from March 28 and April 2 1964. The 1963 date features Mr. Jamal with bassist Richard Evans and drummer Chuck Lampkin; opening with the lively and truly swinging "Johnny One Note" from the 1937 Rodgers & Hart musical "Babe In Arms".  One can help but notice the flexible yet solid rhythm section giving the pianist lots of space to dance. Because the bassist and drummer are not sideman but partners in the creative process. Yes, the pianist selects the material but the music is continually reshaped on the bandstand and in the studio by all three.  Bassist Evans composed "Minor Adjustments", a classically-inspired work that shows how graceful both he and the pianist can play.  The highlight of this first Trio set is the high-energy "Squatty Roo"––the blistering pace allows Mr. Jamal to play both minimalistic and also let loose.  He throws quotes from several songs in his fiery solo. 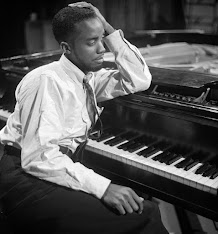 Bassist Evans is gone by the two 1964 sessions of CD 2, replaced by the gracious sounds of Jamil Nasser. The set starts with "Bogota", a handsome piece by the departed bassist that, to these ears, builds on the mood of the pianist's biggest "hit" "Poinciana".  Other highlights include the sweet unaccompanied piano opening to the 1960s "pop" tune "Lollipops & Roses" plus the gospel-infused "Keep On Keeping On" (also composed by Richard Evans).  The latter tune, recorded a week later, breaks out into a lively jam with Mr. Jamal's displaying his blues chops. On the next cut, "Minor Moods", stays in the blues mood albeit in waltz tempo–this time, his two-handed solo pushes against the bass and drums until he dances away; when he adds in several long escapades up and down the keyboard, it's hard not to smile.  Lampkin's brushes blend so well with the melodic moves of both Mr. Jamal and Nasser. The bassist and drummer both get to solo to appreciative responses by the leader.

The booklet that accompanies the package includes interviews with Mr. Jamal, with Marshall Chess (whose Argo label released a number of seminal Lps by the pianist), with Ramsey Lewis, Hiromi, and a long history of the pianist and review of the album's performances written by reviewer/critic Eugene Holley, Jr. 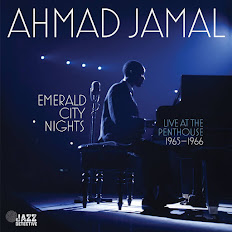 The second double-Lp and CD set begins in March 1965 with the same trio that appeared the previous year.  Like the 1963 set, the album opens with a Rodgers & Hart song; this time, it's "I Didn't Know What Time It Was" from the 1939 musical "Too Many Girls". After a fairly formal-sounding opening, the rhythm section breaks into a brisk tempo and Mr. Jamal creates an incredible solo. Far and away, the longest track on either package (15:07), there are solos by Lampkin and Nasser and nary a dull moment. Just when you think the song is about to end, the Trio slows the tempo down and plays a sweet take on the melody before a short drum solo helps take the tune out. The other three songs on the first CD/Lp were composed by Anthony Newley and Leslie Bricusse and all from their 1964 show "The Roar of the Greasepaint––the Smell of the Crowd".  Mr. Jamal caresses the melody of "Who Can I Turn To" but the next track, recorded seven nights later, "My First Love Song", toggles between an medium-tempo ballad and a swing beat.   The Trio's take on "Feeling Good" is a deep-blues with the hint of Middle Eastern tempos. There's a sly musical reference to the music of Herbie Hancock near the close of the piano.

CD/Lp 2 opens with two tracks from late October 1965. Drummer Vernal Fournier replaces Lampkin for these cuts including "Concern", a bluesy Jamal original that swings with a purpose.  The playful solo features a slew of song "quotes", a quiet section then a bass solo, a drum solo, then back to Mr. Jamal for more "play". "Like Someone in Love" opens with an expansive unaccompanied piano solo that, when the rhythm section comes in, there's pedal point bass and quiet drums while the pianist quotes the opening melody from "The Sound of Music".  When the Trio breaks into a swing mode, Mr. Jamal creates yet another playful solo. 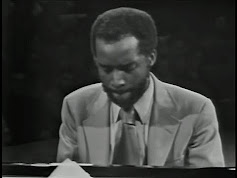 The last three tracks come from September 1966; Frank Gant is now the drummer and the Trio hits the ground running with the Bronislaw Kaper classic "Invitation". The sound quality on these cuts is crisper, louder, yet the Trio still swing the pieces with abandon (Mr. Jamal even strums the piano strings!). Next up is the tune most people associate with Ahmad Jamal, "Poinciana". First recorded for his 1958 album "Live at The Pershing", the hypnotic rhythms and two-handed piano approach has mesmerized audience for over six decades.  The version here does not stray much from the original save for the playful piano solo.  The set closes with Benny Golson's "Whisper Not"––dig the Fats Waller-inspired solo piano opening before the Trio jumps into a high-powered romp featuring a jaunty piano excursion. The music fades out at around 2:40 just as the leader seems to heading into another solo.
The accompanying booklet features another fine essay by Eugene Holley, Jr, a repeat of the statements by Feldman, Mr. Jamal, and Marshall Chess plus essays from Kenny Barron, Jon Batiste, and Aaron Diehl.  All told, "Emerald City Nights: Live at The Penthouse" is a gem that should not be missed.  There is a promise of a third CD in 2023––what a treasure! If you have ever wondered why pianist Ahmad Jamal, now 92 and retired from performing, is held in such high regard, just listen to these two great recordings!
For more information, go to www.deepdigsmusic.com/general-clean. To hear more and to purchase the music, go to https://ahmadjamal.bandcamp.com/album/emerald-city-nights-live-at-the-penthouse-1963-1964 and to https://ahmadjamal.bandcamp.com/album/emerald-city-nights-live-at-the-penthouse-1965-1966.
Here's Mr. Jamal's 1966 Trio with bassist Nasser and drummer Frank Gant on the classic "Poinciana":
Posted by Richard B. Kamins at 10:35 AM