Pianist and composer David Virelles, born and raised in Cuba, moved to Canada in the early 2000s at the behest of musician. Jane Bunnett. While attending college, he recorded with the flutist and came into contact with saxophonist Steve Coleman. On the strength of a grant from the Canada Council for the Arts. Virelles moved to New York City to study with Henry Threadgill, going on to record with the saxophonist/ composer as well as artists such as Mr. Coleman, Chris Potter, Paul Motian, Wadada Leo Smith, Mark Turner, and many others. As a leader, he's recorded for both ECM and Pi Recordings. 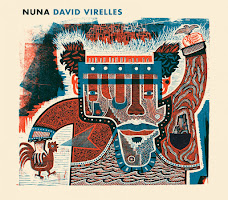 It's on the latter label where you'll find "Nuna", a 16-track, mostly solo (percussionist Julio Barretto appears on three of the tracks), extravaganza. Unlike his previous Pi recording (the digital-only "Transformación del Arcoiris"), Virelles plays acoustic piano throughout save for the opening "Spacetime" on which he adds the percussion instrument marimbula.  The music ranges from Cuban folk melodies to melodic excursions to rhythmic fantasies to free-form improvisations to trance-like journeys. Composed and recorded during the pandemic, the music flows like a giant stream from start to finish. And that's the best way to listen––start with "Spacetime" and don't stop until the ringing chords of "Casa" fade away.  It's quite a musical adventure, one that never overstays its welcome and is so rewarding.
"Nuna", like all of the music David Virelles has created as a solo artist, is fascinating.  His formal training as well as his study of Black Music from playing with so many fine creators, has expanded his vision so that the pianist cannot be pigeon-holed into one genre. Nor should he be. Open your ears and mind, dear listener, and you will be rewarded.
To find out more about the pianist, go to www.davidvirelles.com.
To hear more and to purchase "Nuna", go to https://davidvirelles.bandcamp.com/album/nuna.  There's even a 4-song bonus EP available on the pianist's Bandcamp page (https://davidvirelles.bandcamp.com/album/nuna-bonus-tracks).

Born in Oakland, CA, in February 1955, tenor saxophonist and bass clarinetist David Murray seemed to come fully formed on the Black Music scene in the mid-1970s.  Before moving to New York City, he had played with pianist Horace Tapscott. Before being one of the four co-founders of the World Saxophone Quartet in 1977, he released three Lps in 1976 including the brilliant "Flowers for Albert" (India Navigation Records) and the equally powerful Trio recording "Low Class Conspiracy" (Adelphi Records).  He was prolific through the 1980s and 90s with a series of splendid Octet recordings on Black Saint and quartet dates on DIW plus his work with the WSQ. Murray was never tied to one genre––he could play "free", "in the pocket", in intimate duo sessions, with a big band, in different Caribbean "modes", rearranging the Grateful Dead music for big band and more. 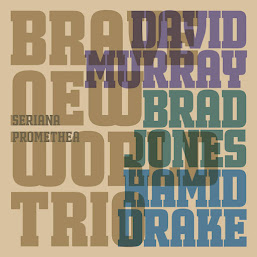 In 2020, the saxophonist created his BRAVE NEW WORLD TRIO (pictured above) with bassist Brad Jones and drummer Hamid Drake. The results of their collaboration can now be heard on "Seriana Promethea" (Intakt Records).  The title track opens the eight-song program on a surprisingly and delightfully funky note with Jones' powerful bass lines and Drake's dancing drums underneath the happy-go-lucky bass clarinet lines. The next track, "Necktar", ups the ante with hard-edged rhythms,  swinging and solid bass lines while the leader romps on tenor sax.  "Metouka Sheli (Ballad for Adrienne)" is a soulful ballad that brings to mind the trio Air (with Henry Threadgill, Fred Hopkins, and Steve McCall) especially in Murray's fluttering tone and how the rhythm section moves through the piece.  The album's sole cover tune is "If You Want Me to Stay", a 1973 hot for Sly & The Family Stone––the trio pushes the rhythm forward harder than the original but dig how Jones captures the insistent feel of the bass lines.  Drake kicks with abandon while the tenor saxophone shouts and "testifies".
The album closes "Am Gone Get Some", a rollicking jaunt pushed by the drums underneath the far-ranging "walking" bass and the leader's scampering tenor solo.  The liner notes reported that the trio recorded in Zurich, Switzerland, after a series of European gigs and it really shows in the group's tightness, support, and desire to push each other further.  No cliches here, no "comping" to fill out the songs, just three musicians at their height of their powers having a great time making music.  I look forward to more experiences from David Murray and his BRAVE NEW WORLD TRIO––in the meantime, "Seriana Promethea" is a true delight!
For more information and to purchase the album, go to https://intaktrec.bandcamp.com/album/seriana-promethea-2.
Here's the title track:
Posted by Richard B. Kamins at 7:10 AM