The Rest of the Music that Moved, Soothed, Educated, and Inspired in 2021!

Yes, it's a long list but my belief is that the albums I have chosen are all worth listening to, that they speak to our current world situations, that the music can give us strength to more forward.  Will this complete the job for 2021? Lord no, but all of these are albums I received to review and not ones that I purchased.  Do check these out if you haven't already!  Happy & Healthy New Year!!

Amir El Saffar River of Sound – "The Other Shore" (Outnote Music/ Outhere Records) – Trumpeter, santurist (the santur is a dulcimer), vocalist, composer, and arranger ElSaffar formed River of Sound six years ago to continue his explorations into Maqam, jazz forms, and more.  This 17-piece ensemble (plus guests) includes strings, different percussion instruments, guitar, piano, oud, reeds, brass, and the leader's fascinating wordless vocals.  This is music to savor, to get lost in, to marvel at the possibilities, and float away.
Go to https://amirelsaffartworivers.bandcamp.com/album/rivers-of-sound-the-other-shore.

Miguel Zenón & Luis Perdomo – "El Arte Del Bolero" (Miel Music) – This splendid live duo recording finds the alto saxophonist and his long-time quartet pianist playing six Latin "standards", caressing each melody and imbuing each song with emotional solos.  While some might say that this is good "evening" music, these tunes sure sound great early in the morning when the natural world is awakening.
Go to https://miguelzenon.bandcamp.com/album/el-arte-del-bolero.

Artifacts – "...and then there's this" (Astral Spirits) – Artifacts (flutist Nicole Mitchell, cellist Tomeka Reid, and drummer Mike Reed), all members of Chicago's AACM, paid tribute to their elders on its 2015 debut from which they took their name. Here, they mostly concentrate on original music. One might be surprised how funky much of this music sounds yet there is depth, interplay, powerful melodies, and a sense of playfulness that transcends genres and generations.
Go to https://astralartifacts.bandcamp.com/album/and-then-theres-this.

Matthew Shipp – "Codebreaker" (TAO Forms) – 2021 was yet another amazing year for pianist Shipp but this solo piano session ranks among his best ever.  While one can still hear the fire that characterizes his earlier album, Mr. Shipp has been exhibiting a delightful melodic streak of late. His ability to create music that eschews genres and cliches remains one of the strongest factors in Matthew Shipp's creative world.
Go to https://taoforms.bandcamp.com/album/codebreaker.

Joe Lovano & Dave Douglas Sound Prints – "Other Worlds" (Greenleaf Music)  – The music on "Other Worlds" is a delightful mix of well-developed melodies and sparkling solos with a rhythm section (pianist Lawrence Fields, bassist Linda May Han Oh, and drummer Joey Baron) second to none.  Messrs. Lovano and Douglas say their inspiration for the quintet remains the visionary work of Wayne Shorter. No better choice for a blueprint but the music on this release is even more than that. Also, great music to get lost in!
Go to https://soundprints.bandcamp.com/album/other-worlds.

Jared Schonig – "Two Takes Volumes 1 (Big Band) & Volume 2 (Quintet)" (Anzic Records) – Drummer and composer Schonig, one of the busier players on the NYC scene pre-Pandemic, has released a most impressive debut recording; in fact, two recordings.  The Big Band session features eight original compositions , each one arranged by a different (and fairly famous) resident of the Big Apple. The Quintet album features trumpeter Marquis Hill, alto saxophonist Godwin Louis, pianist Luis Perdomo, and bassist Matt Clohesy –– with the exception of the three "Drum Interludes" and an electronically processed "Introduction..." intro to the opening track, the repertoire is the same as on the Big Band disk.  Both are worth owning with the edge going to the exhilarating Quintet date.
Go to https://jaredschonig.bandcamp.com/album/two-takes-vol-1-quintet and to  https://jaredschonig.bandcamp.com/album/two-takes-vol-2-big-band.

Jihye Lee Orchestra – "Daring Mind" (Motema Music) – Ms. Lee, who had a good career in her native South Korea as a singer-songwriter, came to the United States to study at Berklee College of Music and discovered a new voice as a composer of large ensemble.  Her self-funded debut album, "April" was issued in 2017, receiving praise from many fellow musicians and arrangers. "Daring Mind" is a delightful blend of melodies, harmonies, and rhythms that takes musical influences from her native country, mixes that with a healthy dose of Western influences plus Ms. Lee's natural curiosity and creates new and quite fascinating.
Go to https://jihyemusic.com/. 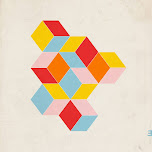 Miho Hazama/ Danish Radio Big Band – "Imaginary Visions" (Edition Records) – In 2019, Ms. Hazama took on a new assignment as Chief Conductor of the Danish Radio Big Band and this album bears the first fruits of that new relationship.  She s following in the footsteps of such notable composers, arrangers, and conductors as Thad Jones, Bob Brookmeyer, and Jim McNeely and if this first album with the DRB is any indication, her tenure should be quite productive and enjoyable for fans of large ensemble music.
Go to https://mihohazama.bandcamp.com/album/imaginary-visions. 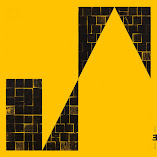 Dave Holland – "Another Land" (Edition Records) – Master bassist Holland is in the midst of a long and amazing career. This album, which features guitarist Kevin Eubanks and drummer Obed Calvaire, roars, whispers, and rushes forward in a glorious blend of sounds. The opening cut, "Grave Walker", is the funkiest music the bassist has created since his days with Miles Davis's "electric" ensemble.  And the title track is a lovely reminder that guitarist Eubanks can draw one in on the strength of his melodies and improvisations.  I can listen to this music all day and revel in its creativity and joy!
Go to https://daveholland.bandcamp.com/album/another-land. 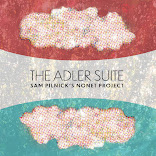 Sam Pilnick's Nonet Project – "The Adler Suite" (OutsideIn Music) – Composer, arranger, saxophonist, educator, and bandleader Pilnick looked to the stars for inspiration as he write the material for his Nonet Project.  Based in Chicago, he spent a number of days composing while visiting the Adler Planetarium and the results are an expansive set of compositions for his little Big Band.  The repertoire display Pilnick's wonder and curiosity and, hopefully, is the beginning of a long, productive, career creating music that transports the listener beyond the mundane.
Go to https://sampilnick.bandcamp.com/album/the-adler-suite. 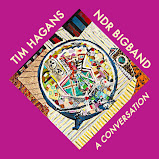 Tim Hagans & the NDR Big Band – "A Conversation" (Waiting Moon Records) – Like the Amir ElSaffar album listed above, the music on composer, arranger, and trumpeter Tim Hagan's new recording takes its time to unfold. The liner notes tell the reader that the arranger broke the Big Band into a number of different "chat rooms" (my words, not Hagan's) so that the various instrumentalists in each would react and respond to each other. It's a fascinating concept that takes the listener a while to grasp; meanwhile, the intelligent melodies and smashing arrangements draws one in to the music.
Go to https://timhagans.bandcamp.com/album/a-conversation-2. 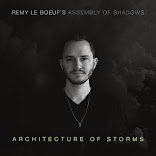 Remy Le Bouef's Assembly of Shadows – "Architecture of Storms" (Soundspore Records) – The second large ensemble album from composer, arranger, and alto saxophonist Remy Le Bouef features nine tracks recorded before the pandemic in 2019 and three recorded in Spring 2021. The composer's splendid ear for melodies and smart harmonies that one heard on 2019's "Assembly of Shadows" album are here as well as is his intelligent arrangements plus sense of rhythmic drive.  This time around, the leader solos on five of the nine tracks and it's a distinct to hear his alto soaring about the ensemble.
Go to https://remyleboeuf.bandcamp.com/album/architecture-of-storms.
Last but not least.... 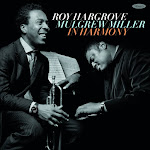 Roy Hargrove & Mulgrew Miller – "In Harmony" (Resonance Records) – Resonance Records is truly the gift that keeps on giving. Producer and coordinator Zev Feldman scouts the world to find live recordings that are either long out-of-print, concerts recorded for radio, and connoisseur recordings committed to tape by zealous fans.  This splendid two-CD set reminds us how great both these musicians were, how the music created through their sadly short lives was so vital, and how sorely many of us miss them. As always, the liner notes are thorough and entertaining, the sound quality excellent, and the music a pure delight!
Go to https://royhargrovemulgrewmiller.bandcamp.com/.
Posted by Richard B. Kamins at 11:45 AM