All Treats & No Tricks!! (Piano edition)

As we head into the Holiday season for 2019, artists and record labels are releasing albums at a......well....at a record pace. Here's a bunch that feature pianists in various setting. 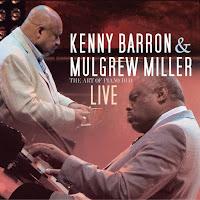 Kenny Barron & Mulgrew Miller - The Art of the Piano Duo: Live (Groovin' High Records/ Sunnyside Records) - Two modern masters of jazz piano as well as two great friends, Kenny Barron (born 1943) and Mulgrew Miller (1955-2013) were invited to tour Europe several times in the decade between the beginning of the 21st Century and Mr. Miller's passing.  Not surprisingly, someone thought to record the concerts.  The music on this set was recorded in Marciac, France, in 2005 and in Switzerland in May of 2011. Happily, Sunnyside has released three full concerts on this 3-CD set.  With set lists ranging from Broadway and popular standards to Duke Ellington, Joe Henderson, and Thelonious Monk, the duo has a rip-roaring time playing melody, counter-point, rhythm, and impressive solos.

It's impossible to pick out one or two standout tracks as there are no duds over the three hour + program.  One thing is certain – there is something for everyone to like.  These gentlemen can swing plus know how to caress a ballad so that the listener does not miss the emotion inherent in the lyrics.  It's hard to to pick who's playing which solo and that really does not matter.  Just dive in and go with the amazing flow!

For more information, go to kennybarron.com/recordings/art-piano-duo-live/.  You can also Fns out more by going to sunnysidezone.com/album/the-art-of-piano-duo-live.

Here's a piece to whet your (musical) whistle:

Here's the duo in action from Vienna, Austria (this piece is not on the album but it's certainly worth checking out): 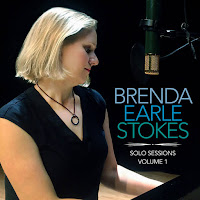 Brenda Earle Stokes - Solo Sessions, Vol. I (AllSheNeeds Music) - One can never know what will befall them when they move away from home.  School, jobs, marriage, and children (and much more) change most people so that when they come home, they are changed.  Vocalist-educator-pianist Brenda Earle Stokes was raised in Sarnia, Ontario, Canada, where she went to school, took piano lessons (from the age of four), where she performed, and became prepared to study further in the "Big City."  She has performed on cruise ships, taught and performed in places and far-flung as Australia and New Zealand.  Since 2002, Ms. Stokes has issued four albums that feature standards and originals backed by session men and friends.  She is featured on piano on various tracks but the focus has always been on her voice. 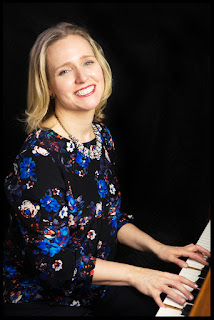 Album #6 brings her home, right to the Sarnia Public Library into the performance room where she played as a young girl and participated in other events.  This is not the first time she's recorded singing and playing the keys but it's the first time she has felt compelled to "go it alone" on record (she had done so in concert). No need to worry as the recording is a stone joy from the opening notes to the close.  Along the way, Ms. Stokes explores songs from the Great American Songbook, from Brazil, from the years the she was growing up, and even back to a Leroy Carr blues (from the 1930s).  That track, "How Long Blues", displays her chops with a blow to Memphis Slim. Another delightful surprise is the slinky version of "The Power of Love" (the Huey Lewis & The News tune from the 1985 movie "Back to the Future") – not only is the music deeply funky but there's a bit of gospel feel in there as well.  There's a delightful version of Steve Swallow's "Ladies in Mercedes" (with lyrics by Norma Winstone)  and a lovely take of Dave Brubeck's "Strange Meadowlark." That latter track appears on the pianist's classic 1959"Time Out" Lp; here, Ms. Stokes adds Iona Brubeck's lyrics  and really digs into the piece.

There's plenty more so check out "Solo Sessions, Vol. 1" – revel in the music and the fact that there's more to come!  Brenda Earle Stokes, whose voice has alway been appealing to these ears, shows just how fine a pianist she is as both an accompanist and soloist.  Put on the music, sit back, and enjoy.

For more information, go to brendaearle.com. 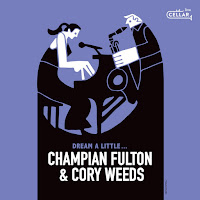 Champian Fulton can play piano, she can sing, she can swing, she can be sassy, and can be silky smooth.  Over the past dozen years, she's had 10 albums as a leader or lead singer. Number 11 is a delightful live session recorded late February of this year in Vancouver, British Columbia, Canada, and featuring Ms. Fulton alongside tenor saxophonist Cory Weeds.  "Dream a Little..." (Cellar Live Records) finds the duo exploring nine standards and one original over the course of an hour.  It's quite a treat to hear Weeds weave his tenor lines around the piano on "Fly Me To The Moon" and carrying on a conversation with Ms. Fulton's vocal on "Darn That Dream".  One can hear traces of Sarah Vaughan and Betty Carter on the latter track plus dig the Art Taum-esque piano solo on this most delightful ballad. 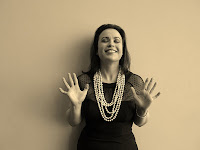 Mr. Weeds leads the way into "Tangerine": soon, the duo is off and running its respective way through the changes.  Ms. Fulton is an excellent accompanist, giving her partner a lovely cushion of chords to play as well as a sprightly bass line.  The pianist takes the lead on "I'd Give a Dollar for a Dime", pleading for the coin to play a one song on the juke box.  Mr. Weeds plays an expansive blues-tinged counterpoint. The album closes with Buddy Johnson's "Save Your Love For Me".  Using the Eddie "Lockjaw" Davis arrangement, the duo dogs in and swings the heck out of the piece.  Pay attention to how the piano colors the background behind the expansive tenor solo.  Make sure to check out the great piano solo that follows.  A bit of Earl "Fatha" Hines, James P. Johnson, and Eubie Blake plus a whole bunch of Champian Fulton makes for a finger-snapping treat.

"Dream a Little..." is a lot of fine music in one dynamic duo package. Champian Fulton & Cory Weeds certainly had fun that night (check out the pianist's giddy response to the tenor solos) and you will as well once you surrender to the sweet sounds. 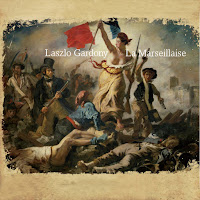 To paraphrase one of the more famous advertising phrases of early 20th Century (see here), "They smile when Laszlo Gardony sits at the piano, because they know, they're going to hear some great music before he stands back up."  His new solo piano album, "La Marseillaise" (Sunnyside Records), was recorded live in March at the Berklee College of Music Keys Fest.  While his small group has always been impressive, when he plays sans accompaniment, Gardony just seems more expressive.  Plus his programs always combine originals, fully improvised pieces, standards, and pieces that mesh blues, gospel, New Orleans, and r'n'b into magical works.   Every time I have seen Mr. Gardony play in concert, he's smiling and having the time of his life – even though this is a recording, that happiness comes through loud and clear on this album!

The opening track, "Revolution" (one of five original pieces), is based on the French Revolution-inspired song that gives the album its title.  After the classical-style reading of the theme, the pianist's left hand gets into quite a boogie-woogie groove.  Note the up-tempo rhythm the pianist gives "O Sole Mio" making the song feel more like Myra Melford than Elvis Presley "It's Now or Never").  In the middle of the program, the mood goes to introspection on Errol Garner's "Misty" – it's such a lovely reading, a bit bluesy yet always melodic.  That's followed by a powerful performance of fellow pianist (and label mate) Denny Zeitlin's classic "Quiet Now."  Also introspective in nature, Mr. Gardony plays so expressively that it seems like the piano is singing. 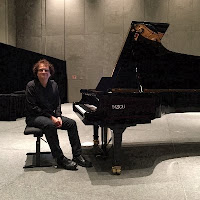 There are two fully improvised pieces. "Four Notes Given" is based on four notes suggested by the audience and the pianist elaborates on those tones.  The resulting music has a hypnotic sound not unlike the solo piano work of Keith Jarrett.  "On The Spot", an apt title, builds quickly from the initial melodic fragment; it's rapid pace and long flowing lines leaves the listener breathless.

"La Marseillaise" closes with another original, "Bourbon Street Blues", a piece first recorded in a small group setting. Played solo, the music has the feel of an Allen Toussiant composition right down to the dancing left hand and the rollicking melody lines. There is no way one can feel blue listening to the music. Laszlo Gardony plays with such verve, empathy, and downright ebullience tha one feels the urge to hit "repeat" each time the final applause dies down.  As I write this, we're heading into the "darker" months of the year so let "La Marseillaise" carry you through the grey days and crisp, chilly, nights!

For more information, go to LGJazz.com.