I have known Taylor Ho Bynum since his student days at Wesleyan University. He earned both his BA (1998) and Master's Degree (2005) there, all the while playing with various members of the faculty including Bill Lowe and Anthony Braxton.  After graduation, he played with numerous musicians and group but especially with pianist-conceptualist Cecil Taylor, trumpeter-conceptualist Bill Dixon, and with numerous ensembles led by Professor Braxton.  In fact, Bynum was the Executive Director of Braxton's Tri-Centric Foundation from its founding in 2010 until 2018.  He currently is teaching at Dartmouth College and leading the jazz and creative music ensemble. Bynum is a founding partner of Firehouse 12 Records, one of several labels that issue his music. 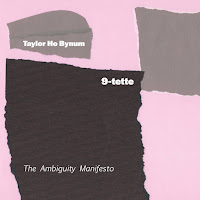 His latest record, "The Ambiguity Manifesto", is his sixth for the label, each one featuring a different ensemble.  The new one features his 9-tette, composed of two brass, two reeds, two basses (one electric, the other acoustic), a cellist, drummer, and guitarist. All seven pieces are Bynum originals and, as usual, the music goes in many different directions, often in the same piece.  Those of you familiar with Bynum's recordings for Firehouse may be surprised by the James Brown-style drumming that opens the album – to these ears, it also sounds somewhat like Julius Hemphill's "Hard Blues."  The song, titled "neither when nor where" utilizes that funky beat to introduce the different instruments.  Tomeka Reid's cello lines shows the influence of Abdul Wadud and it's fun to hear Jim Hobbs' alto sax in counterpoint to  Ingrid Laubock's tenor sax.  In the bridge, Bill Lowe's trombone dances over the sympathetic reeds.  Tomas Fujiwara is rock steady behind the drum while the rest of the band frolic.

The material ranges from the free-wheeling "anter ally" to the circus-like noise of "enter (g)neither" which at 18+ minutes gives the different voices of the ensemble a chance to converse together. Mary Halvorson's guitar lines have quite a percussive feel and supported by Professor Lowe's tuba is quite playful. The section where the guitar interacts with Ken Filiano's acoustic bass and Stomu Takeishi's electric bass leads into a slow marching beat where the music feels like a slow merry-go-round – note the smooth sounds from the leader, a bluesy feel even.  A lot goes on and all of it is absorbing.

The last two tracks, "enter ally" and "unreal/real (for old music)", are "freer" in their structures yet there are still multiple conversations going on in each song.  The former gets a bit noisy in the middle especially when the effects-laden guitar rolls in with the droning tuba. Since the piece is continually evolving, one must listen several times to absorb the soundscapes created.  The final track opens with the leader's cornet sputtering and wheezing alongside the rippling soprano sax (Ms. Laubrock) with the bowed cello, chattering guitar , and thrumming acoustic bass leading in the trombone, drums and alto sax.  Listen closely for the clucking electric bass and alto sax and the tenor sax – in the wink of an eye, the music falls into a gentle martial beat while the other voices either create sonic effects or play melodies.  Hobbs alto sax leads the ensemble forward as Fujiwara creates a straight-forward rhythm.  Roll with it and you'll be surprised where the 9-tette takes you.

"The Ambiguity Manifesto" does not beat the listener over the head but does take one on quite a journey.  Taylor Ho Bynum seems to relish composing for a larger palette (his Firehouse 12 albums range from sextet to septet to octet to nonet to 15 members) – this album shows his continued growth as well as his need to be part of the band and not in front all the time.  There's no plans to tour the band as of its September 27th release date but the Sextet appears at Firehouse 12 on November 8, 2019.

For more information, go to taylorhobynum.com.


Three of the four musicians pictured below – Mary Halvorson, Tomas Fujiwara, and Tomeka Reid – are on the album above plus are members of Ms. Reid's Quartet. They, along with bassist Jason Roebke, have just released a new album.

The Tomeka Reid Quartet recorded and released its eponymous debut album for Thirsty Ear in 2015.  Since then, Ms. Reid has relocated to Queens, New York, and has entrenched herself in the contemporary music scene. She plays with Anthony Braxton and Nicole Mitchell and was featured on the latest Art Ensemble of Chicago album. Ms. Reid also is part of Hear in Now, a string trio with violinist Mazz Swift and bassist Silvia Bolognesi not to forget her collaborations with Roscoe Mitchell.   Ms. Halvorson and Mr. Fujiwara works together in the trio Thumbscrew (with bassist Michael Formanek) as well as with Taylor Ho Bynum, Chris Speed, and Ben Goldberg.  Mr. Roebke is a fixture on the Chicago music scene – he studied with Roscoe Mitchell and plays in or leads numerous groups. 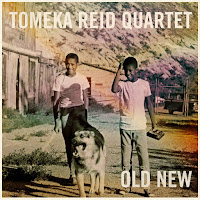 "Old New" (Cuneiform Records) is, if anything, even more exciting than the fascinating debut from four years ago.  What stands out (what doesn't?) is how many of these pieces – all composed by the leader – are so rhythmic.  The title track comes bursting out of the speakers with an urgency and pace sure to raise the temperature.  Reminiscent of of the opening track of saxophonist Julius Hemphill's 1977 Black Saint Lp "Raw Materials and Residuals" (with drummer Famadou Don Moye and cellist Abdul Wadud), Roebke and Fujiwara lock in and push the music forward.  Ms. Reid creates a powerful solo (with Ms. Halvorson adding playful counterpoint) and she wails away.  The melody line, which is repeated at the end of the piece, is a delightful blend of plucked notes and melodic, flowing, lines.

The energy continues to flow on the following track "Wabash Blues." Again it's Mr. Roebke's muscular bass and Mr. Fujiwara's powerful drumming that leads the way.  In fact, the drummer gets the spotlight right after Ms. Halvorson's solo, one that's filled with her trademark "bent notes" and rippling phrases.  "Niki's Bop" follows, ushered in by the dancing New Orleans-style drumming and contains a boppish melody line played unison by guitar and cello that will have bobbing your head.  They stretch the lines out for over a minute before Ms. Reid and Ms. Halvorson dance/solo together.  Dedicated to flutist Nicole Mitchell, the music make sone want to get up and dance.

The recording has so many moments that turn your head with their inventiveness and the Quartet's splendid interactions.  For instance, "Sadie" swings with glee with Ms. Reid playing pizzicato throughout – the "boppish" quality of the song brings to mind the groundbreaking cello work of Oscar Pettiford as well as the "baby bass" playing of Percy Heath and Ron Carter. Ms. Halvorson's raucous guitar playing gives the piece a more modern bent.  Listen to her "shred" on "Edelin", roaring above the solid rhythm section.  The cello solo has a power of its own, filling up the "bottom" of the sound with deep notes.

"Old New" closes with "RN",  a piece with a handsome melody yet there is a pleasing rhythm to push the music along.  Mr. Roebke actually solos before the band can introduce the melody;  before long, Ms. Reid's lovely flowing lines produce a magical solo as does Ms. Halvorson although she fills her solo with echoing phrases that feel like bubbles about to burst.  There's a "singing" quality to the track tha promises new directions for the future of the Tomeka Reid Quartet.  This program is a delight-filled group of performances that shine, swing, rock, sway, explode, and push their way into your ears and mind.  And, it's an excellent effort from start to finish – give a listen, give 10 listens!

For more information, go to www.tomekareid.net. 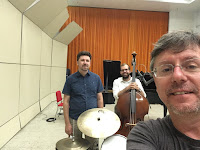 There is something about the music of Thelonious Monk that allows it to be very much his own yet totally open to interpretation by others.  Pianist Michael McNeill, who have been active inBuffalo, NY, but currently resides in Saluda, VA, is a member, composer, and arranger for several groups including the Buffalo Jazz Octet plus a trio with drummer Phil Haynes and bassist Ken Filiano. He's also a member of the cooperative trio with bassist Denny Ziemann and drummer John Bacon.  It is with that rhythm section that McNeill has recorded "Refractions" (Jazz Dimensions Records), a seven-song program comprised of Monk tunes, all of which are pretty well-known. 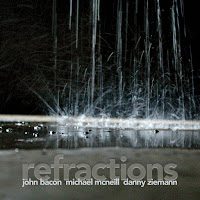 The trio approaches the music from numerous directions. Whereas the album opener, "Ugly Beauty", has an abstract impressionistic, rubato, opening, "Hackensack" swings delightfully from the opening note.  Once the former piece "opens up" into its rhythm, the music remains exploratory but retains the handsome melody, especially thanks to the fine piano solo.  The latter is the longest piece on the disc, replete with delightful interactions between the piano and drums plus a long, wonderfully melodic, solo from the bassist.  The trio takes "Light Blue" as a ballad with rich solos from McNeill and Ziemann – "Reflections" is taken even slower with the bass and piano caressing the melody, both musicians basing their solos off the opening verse.  "Let's Cool One" has that "sit back and relax" groove. McNeill creates a delightful, two-handed, solo filled with spirit while Bacon's spotlight is playfully minimalistic. 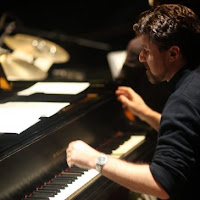 The last two tracks start with a solo piano reading of "Monk's Mood."  McNeill gives the handsome melody a Gershwin-like spin, accentuating the harmonic possibilities and leaving just the right amount of breathing room to let the notes ring n the listener's ears. After a short melodic bass intro, "Straight No Chaser" jumps into an energetic rhythm and swings forward on the power of the piano solo and Bacon's propulsive drums.  Pay attention to Ziemann's solo latter in the piece: he's plays both melodically and rhythmically, managing to steer clear of clichés throughout (plus his dialogues with Bacon really kicks nicely.

Though Thelonious Monk has gone nearly four decades (and had retired from playing 11 years before his passing), his music continues to reverberate loudly through contemporary music.  On "Refractions", the trio of John Bacon, Michael McNeill, and Danny Ziemann honor his legacy by not playing it safe, but playing with joy and with an exploratory spirit.

For more information, go to michaelgraymcneill.com.