Sounds From All Sides 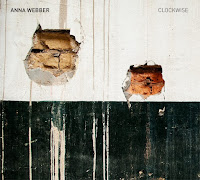 Like many modern musicians, Anna Webber (tenor saxophone, flutes) is an extremely busy player. She has four ensembles of her own, performs with, at least, a dozen more.  Her newest recording, "Clockwise" (Pi Recordings), features a impressive septet performing nice original compositions all based on Ms. Webbers's study of various percussion compositions by Iannis Xenakis, Morton Feldman, Edgard Varése, Karlheinz Stockhausen, Milton Babbitt, and John Cage.  In her own words,  “The goal was not to re-contextualize the composers’ original intents or ideas, rather it was to find hidden sympathetic points of resonance within the primary compositions that I could abstractly develop into new works."

What one hears is a fascinating collection of songs with the seven musicians weaving their sounds in and out of each other.  On "Idiom II", the forward motion is provided by Matt Mitchell (piano) and the drums of Ches Smith.  The melody is made up of various short phrases, often repeated, played by the band (including Smith) - at times, the reeds create a siren sound over the rest of the ensemble.  The title track moves slowly on on the bass lines of Chris Tordini, the leader's bass flute, and Smith's vibraphone.  As the rest of the group enters one by one, the music maintains its slower pace with the flute warbling above the lower tones.  Later in the piece, the melody is shared by the piano and flute, adding trombone (Jacob Garchik), clarinet (Jeremy Viner), cello (Christopher Hoffman), and more of Smith's melodic drumming. The episodic nature of the piece opens up to several different textures, all of which have a trance-like feeling.

The experimental nature of several compositions may put some listeners off but stay with it.  "King of Denmark I/Loper" starts with a starburst of sounds that all drop away for Smith's crisp, almost martial, drums that provide the foundation for the reeds, cello, trombone, piano, and bass to play a shared melody line.  There is a powerful tenor sax solo from Viner with Hoffman's cello as counterpoint - there are moments throughout the song that remind this listener of thematic of King Crimson.

It would be wise to find your own way through "Clockwise."  It might take a while to hear the music as a whole. Notice how the solos are conversations between several musicians - you cannot help but notice how brilliant the playing of Ches Smith is throughout the program.  Then again, after you listen three times, the brilliance of the music is not just the settings Anna Webber creates but how everybody's voice is equal. Ms. Webber also takes solo pieces from Smith and Chris Tordini, cuts them up, and reassembles them to create "King of Denmark II" and "III."  All told, an amazing project and a fascinating recording.

For more information, go to annakristinwebber.com.

While the picture on the left looks like a folk music trio in the style of The Kingston Trio (well, no matching shirts), it's actually Stephan Crump's Rosetta Trio. The bassist and composer formed the group in 2004 by inviting guitarists Liberty Ellman (acoustic) and Jamie Fox (electric) to play pieces that Crump had composed post-9/11/01.  Their trio's debut album was issued early in 2006 on the bassist's Papillon Sounds label to be followed in 2010 by "Reclamation" and in 2013 by "Thwirl", both on Sunnyside Records. 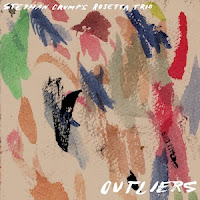 In 2019, it's back to Papillon Sounds for the trio's fourth album, "Outliers."  Nine new originals (all by one by the bassist - the exception is Ellman's "Cryoseism"), each song a delight.  Yes, the music is quiet but most of the pieces have a powerful forward motion. All three play"rhythm" parts, supporting each other, playing melodies and riffs together, telling communal stories.  Listen to the title track, how all three create the hypnotic melody/rhythm, and how the music opens up to the short solo interactions. As Crump solos, the guitarists soften their respective sounds, making the music more melodic. The final section, with Fox supplying the repetitive phrase, finds Crump bowing the bass while Ellman plays melodic counterpoint.

The following track, "Synapse", opens with quickly strummed guitars a la The Who's "Pinball Wizard" and Prince's "Kiss." The song then moves into a delightful interchange between the two guitarists with Crump pushing the piece forward.  The song is actually pretty funky, especially the lines played by Ellman on acoustic.  "Away From, A Way To" is a handsome and emotional ballad with all three musicians having a role in the melody, solos, harmonies, and counterpoint.

"Outliers" may be pleasing "background" music but, if you truly sit and listen, the music is a delight from start to finish. The melodies are intelligent and the musicianship is quite impressive; even more important to note is how Stephan Crump, Jamie Fox, and Liberty Ellman work so well - intuitively - together as an ensemble. The Rosetta Trio, excellent music that will warm your heart and mind!

For more information, go to www.stephancrump.com/rosetta-trio.

Drummer, composer, and educator Ethan Ardelli, a native of Nova Scotia and now a resident of Toronto, has worked with pianist David Virelles and recorded with flutist Jane Bunnett. Besides his own quartet, he has steady gigs with trombonist Darren Sigesmund's Quintet, the Nancy Walker Quintet, Alexander Brown's Sextet, the Brian Dickinson Trio and guitarist Harley Card's Quintet. 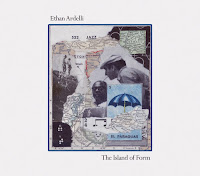 His debut as a leader, "The Island of Form" (self-released", came out in November of 2018 and features alto saxophonist Luis Deniz (Hilary Duran Latin Jazz Band), pianist Chris Donnelly (Myriad3), and bassist Devon Henderson (Civil Wray). All eight tracks are Ardelli originals, all written for these musicians, and all feel as if the band spent plenty of time together. Not that that the music feels "perfect" but that the four musicians really listen to and push each other.  Plus, the compositions all have strong melodies which opens so many possibilities for the soloists.  On initial listens, one might hear traces of the recent iterations of the Charles Lloyd Quartet (in the airiness of saxophone sound and the group dynamics) plus a kinship with the Branford Marsalis Quartet and the Miguel Zenón Quartet.  Still, Ardelli's music and the band's performances seem to owe allegiance to no group or musician in particular.

My suggestion - dive right in to this album. "Agua" opens the program with a taste of Caribbean rhythms and a touch of Lloyd's "Forest Flower."  Once the quartet enters the body of the song, the beat gets "heavier" and the well-developed melody takes off over the rhythm section.  Deniz steps out first, building a delightfully intense yet melodic flight fancy.  Donnelly leads the way into "The Serpentine Path", an impressionistic ballad that feels through-composed - there is a long unaccompanied piano section right after the full band plays the theme. The pianist ratchets up the intensity but then drops it way down for the handsome bass solo (splendid cymbal work from the leader in the background).  Deniz also works off the melody for an excellent, full-toned, solo.

Later in the program, the quartet play with great fire on "Thanks For Something", the drummer again leading the way with his propulsive style.  The album closes with "Shangri-La Pearl" which rolls along on Donnelly's strong piano chords, Deniz's lyrical alto saxophone playing plus the interactions of the rhythm section.

"The Island of Form" is an auspicious debut. Ethan Ardelli has taken the time to develop his music, to form a group sympathetic to his vision, one that would carry it out in surprising and very musical  ways.  Excellent music and well worth your time!

For more information, go to www.ethanardelli.com.

Here's the opening song in a live version from November 2017: