When I try to explain to my friends about why I love the music of Lorraine Feather so much, I'm often at a loss for words.  In a recent post of another blog, I compared the ballads she writes and sings to those of Randy Newman. But, the jazzy inflections of other tunes might suggest comparisions to Joni Mitchell or Oscar Brown Jr.  Her lyrics to songs by Fats Waller and Duke Ellington have links to the work of Jon Hendricks, Annie Ross, and Bob Dorough. Yet, she sounds like none of the artist I mentioned above. What's a hapless writer to do?  Mea Culpa - Lorraine Feather is her own person, a fascinating lyricist who does not avoid humor, exposes her myriad interests in her songs, understands that "this is what I do, who I am (or, at least, as much I will let you into my life)", and is curious about so much. 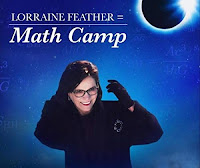 "Math Camp", her latest musical adventure, is the 12th release since she first began her solo career in the mid-1990s. This is her "science" album (although one could argue, most of the music she has released since 2008 shows her fascination with the science of relationships) as well as the first since she headed back East from rural Washington state.  Seven of the 10 tracks were composed by long-time associate Eddie Arkin with the remainder by another long-time contributor Shelly Berg.  Four songs are just piano and voice, three feature the quartet of Fred Hersch (piano), James Genus (bass), Gilad Hekselman (guitar), and Terri Lyne Carrington (drums), and the remaining three feature the West Coast ensemble of Grant Geissman (guitar), Michael Valerio (bass), and Michael Shapiro (drums) joined on several tracks by co-producer/co-arranger Arkin on guitar or pianist Russell Ferrante, and  on two cuts, by reed master Dan Higgins (alto flute, clarinet). 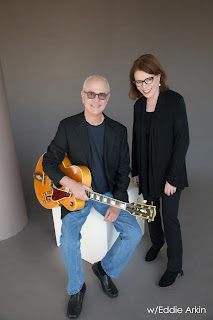 Songs such as the title track, "Hadron, Meson, Baryon", "In a Hot Minute", "It All Adds Up", and "Some Kind of Einstein" all are related to the overall Science theme.  "Hadron..." is a jazzy, breezy, journey inspired by a magazine about physicists at a conference studying a "theory of everything" with the song's title not a law firm but a trio of sub-atomic particles.  It's a treat to listen to the NYC musicians grooving underneath the voice.  "...Hot Minute" and "...Adds Up" are inspired by quotes from scientists, the first from astro-physicist Neil de Grasse Tyson and the second from physicist Richard Feynman.  The former has a Latin groove delightfully transmitted by the NYC quartet while the latter is a "jump tune" taken a breakneck speed. Enjoy how Ferrante and Higgins (clarinet) play Berg's be-bop inspired riff alongside Ms. Feather's vocal.  Ferrante returns to accompany the voice on the emotionally rich ballad "The Rules Don't Apply", the title song from a 2016 Warren Beatty movie "Rules Don't Apply" - the piece was nominated for the Critics Choice Award. 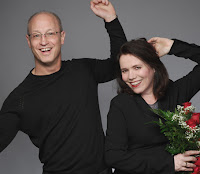 "I'll See You Yesterday" (another one of the Berg melodies) takes its inspiration from Kurt Vonnegut's "Slaughterhouse 5" as well as William Shakespeare. Berg's third contribution, "...Einstein", closes the album and is built off a splendid Mozart-inspired melody while one of the verses was inspired by a New York Times article from 1919 about an experiment conducted during a solar eclipse by British astronomer/ physicist Sir Arthur Eddington.  Note the lovely use of vocal overdubs.

Is "Math Camp" the first album that could be called "Geek Jazz"?  That's up to you. Ditch the label and just listen, laugh and sigh, tap your toes, enjoy the wonderful contributions from the musicians, and revel in the way Lorraine Feather sings, speaks, and writes.  In my youth, I was a horrible science student but, over the years, my fascination with what human beings and the physical world is composed of, has increased umpteenth fold (is there such a thing?).  As for outer space, like many of my contemporaries, I was equally fascinated by the "Space Race" and by the likes of Isaac Asimov, Arthur C. Clarke, and other speculative fiction writers.  Who knew Ms. Feather was a kindred spirit?  It would not surprise that the singer/songwriter's fans around the world might croon to her "Teach Me Tonight." Seriously, "Math Camp" is a delight from start-to-finish and will send ripples through your personal universe for many a day and night.

For more information, go to lorrainefeather.com.

Imagine if you can that you are raised in London, England, by a single mother.  Then, you move to the United States to begin career as a journalist. Now in your mid-20s, you discover that your birth father is a Black man from Trinidad and that your DNA contains numerous connections to Africa. Some years later, you decide to study jazz singing in New York City with the likes of Mark Murphy and Sheila Jordan.  Seven years later, in 2004, you record your first album. 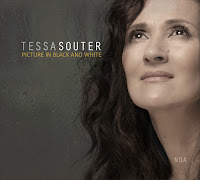 That is a very short description of the life of Tessa Souter, the singer-songwriter whose fifth album, "Picture in Black And White" (self-released), is, in some ways, a musical autobiography as much as a fascinating collection of songs.  Ms. Souter, who also produced the album, works with a band throughout the program, an ensemble that includes her husband Billy Drummond (drums), Yotam Silberstein (guitars, oud), Adam Platt (piano), Dana Leong (cello), Keita Ogawa (percussion), and Yasushi Nakamura (bass).   The material blends originals with songs by Jon Lucien (a mentor to  the singer), Wayne Shorter, Ornette Coleman, McCoy Tyner, Terry Callier, U2, Milton Nascimento as well as folks songs and the standard "A Taste of Honey."

There is a plethora of memorable moments on this album.  The intelligent blending of Callier's "Dancing Girl" with U2's "Where the Streets Have No Name" is emotionally rich while Lucien's "Child of Love" dances forward on the strength of the percussion work by Ogawa and Drummond and the handsome acoustic guitar playing.  Vicki Burns created a powerful and lyrical story for Tyner's "Contemplation" while also adding the title "Ancestors".  Led by Platt's powerful piano work and  Drummond's equally robust drumming, her voice rises above the musical storm to tell a story about a person's roots.  Coleman's "Lonely Woman" with its recognizable melody features voice, bass, cymbals, and drums. There's so much going on, the participants are fully invested, and the song becomes a haunting elegy.

There are three originals pieces (words and music) in the 12 song program and they appear in order 2/3rds of the way through the CD.  The title track features with just the bass and guitar (overdubbed, at least, twice); it is a bittersweet story of the memories that the singer has of her father, mostly through old photographs.  The pace picks up with "You Don't Have to Believe" with Silberstein playing both guitar and oud while Ogawa creates a steady beat on the frame drum. "Reynardine" is actually a traditional British folk ballad adapted for string bass, guitar, and oud.  Ms. Souter, who arranged the song, tells the tale-in-song in a powerful voice, the words clearly articulated. The piece would not sound out of place on a Sandy Denny album.

Earlier albums from Tessa Souter have appeared on Motema Records and the Japanese Venus label.
"Picture in Black and White" is her first self-released project and the freedom one gets from a "Do It Yourself" project is evident throughout as this program is so varied, the band (in its various forms) is with the leader from the beginning, and the results are rewarding for the listener.

For more information, go to www.tessasouter.com.