The joy of teaching (for me, it is quite a joy) always gets in the way of reviewing. With the weekly influx of albums, worthwhile music gets pushed to the back of the shelf.  Such is the case with these two albums. As the great Charlie Parker so nicely stated on his 1945 Savoy recording, "Now's the Time"!

As someone who has been a fan of poet Philip Levine (1928-2015) for over three decades, when the album "The Poetry of Jazz" (Origin Records) arrived in the mail in early March of this year, I was thrilled. This collaboration with alto saxophonist and composer Benjamin Boone began in 2010 when Boone met the poet on the campus of Fresno State University in California.  Levine was a "jazz poet" throughout his career, his collections peppered with poems about Erroll Garner, Charlie Parker, John Coltrane, and others.  I once saw and heard Levine read at Wesleyan University in a duo setting with a vibraphonist, a fascinating combination of melody, words, and rhythm. 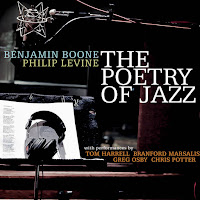 For their collaboration, Boone composed music to fit Levine's words and his voice. He surrounds that voice on most tracks with the fine rhythm section of David Aus or Craig Von Berg (piano), Spee Kosloff or Nye Morton (acoustic bass), and Brian Hamada or Gary Newmark (drums) plus a slew of guests.  Many listeners will be attracted by the appearance of tenor saxophonist Chris Potter on "The Unknowable (Homage to Sonny Rollins)", trumpeter Tom Harrell on "I Remember Clifford (Homage to Clifford Brown)", alto saxophonist Greg Osby on "Call It Music (Homage to Charlie Parker)", and tenor saxophonist Branford Marsalis on "Soloing (Homage to John Coltrane)" - those songs are fascinating with great playing from all involved supporting poems that speak to the joy of the musicians they pay tribute to.

Yet, there are many other treasures on this 14-song program.  The sweet homage to "Yakov", an immigrant whom the poet met as a young man working in an automobile factory in Detroit. Boone contributes a wonderful soprano saxophone solo, keening high above the band withy support from the trumpet of Max Hembo.  One of Levine's most famous poems (a poem he wrote in 1968, a year after the riots in Detroit), "They Feed They Lion", arrives in a frenzy of soprano saxophone, trumpet, and French horn (the brass played by Boone's sons Atticus and Asher) - it's a riot of sound and fury.

The album closes with "What Work Is" (another of Levine's most famous works as well as the title of one of collections), a lovely recollection of the poet's older brother who worked on the third shift at the Cadillac factory while studying opera during the day.  It's a stunning piece, especially with Boone's alto saxophone wrapping around Levine's voice, a handsome way to end a powerful program.

If you have never encountered the poetry and essays of Philip Levine, please check him out. Benjamin Boone is a new name to me.  A native of North Carolina, he studied at the University of Tennessee and did graduate work at Boston University and University of South Carolina. He has performed in many countries around the world and did work as a Fulbright Scholar in both the former Soviet Republic of Moldova and in Ghana.  This album was recorded at four different sessions over the course of two years (2012-2014), then took a while to find a home and was finally released in late March of this year.  Find the album, dig into the program, go back to the music and to the poetry, and celebrate this brilliant collaboration.

For more information, go to www.benjaminboone.net.  To learn more about Philip Levine, go to www.poetryfoundation.org/poets/philip-levine. 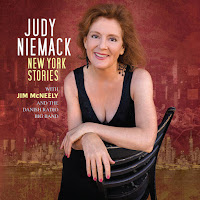 "New York Stories" (Sunnyside Records) is a delicious collaboration featuring the words and voice of Judy Niemack, the arrangements of Jim McNeely, and the powerful playing of the Danish Radio Big Band. The nine-song program was actually recorded/broadcast in November of 2013 but not released until August of this year (Ms. Niemack's second CD for Sunnyside).  Her supple voice, fine scat singing, and intelligent lyrics pay homage to how the blues influenced jazz, telling stories splendidly framed by McNeely. 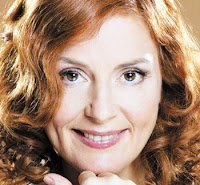 The title track is an episodic journey to the vocalist's current residence. Note how the beat changes from the bluesy, even sultry opening section, getting "funky" in the middle as the brass and reeds play phrases from the oeuvre of Thelonius Monk and Charlie Parker. Five of the nine come from Monk. First, the ensemble digs into "In Walked Bud" which carries the name "Suddenly" and spotlights the lyrics of the late Jon Hendricks. It's one of the first arrangements McNeely wrote for Ms. Niemack (1993) and one can understand why the vocalist loves it.  It allows her to be sassy and for her voice to move in and out of the sections before and after the solos.  Elsewhere, Ms. Niemack and Mr. McNeely turn "Misterioso" into "A Crazy Song to Sing"; the opening would fit one of Alfred Hitchcock's movies but once the vocalist enters, the piece turns brighter. Slowly but surely, the music becomes a journey into the blues and then into big band euphoria.

The album also includes the vocalist's take on Clifford Brown's "Daahoud", here titled "I Should Have Told You Goodbye" - she most certainly captures the joy in Brown's music and joins in on the soloing with her vocal flight of fancy. The ensemble inhabits the reading of Sting's "Fragile", a plea for peace in the war-torn areas of Central America.  Accompanying Ms. Niemack's articulate vocal is an arrangement that lifts off from the rhythm section to places where the brass and reeds dance together that is both emotionally and melodically rich.

The album closes with the appropriately placed "It's Over Now", a delight-filled journey through Monk's "Well You Needn't".  Everybody jumps from the get-go with the rhythm section kicking along as the sections respond and retort to the soloists.  It's so much fun that it makes this listener want to go back to the beginning of the disc and start the 75-minute merry-go-round one more time.

"New York Stories" is an aural treat, a celebration of music that puts the spotlight on the voice and words of Judy Niemack and the delightful arrangements of Jim McNeely.  Kudos to the Danish Radio Big Band (musicians listed below) whose involvement helps to make this journey such an excellent one!

For more information, go to www.judyniemack.com.