Autumn is here and the time is right for jazz in concert venues and performance spaces!  This weekend in Connecticut promises little foliage but three fine shows, all of which are worth your time and effort to attend.

Saxophonist, bassist, composer, and educator Mark Zaleski returns to The Side Door Jazz Club in Old Lyme.  His band includes brother Glenn on piano, tenor saxophonist Jon Bean, guitarist Ciao Aifune, bassist Danny Weller, and drummer Oscar Suchanek.  They'll play music from Mr. Zaleski's second album, 2017's "Days, Month, and Years" as well as his latest project which is a collection  of rearrangements, reconstructions, and deconstructions of Michael Jackson's songs.  What you'll hear over the course of the two sets is great interactions, smart melodies, and powerful solos. Plus it's great fun.

For tickets, call 860-434-2600 or go to thesidedoorjazz.com. To learn more about MZ, go to www.markzaleskimusic.com.

Firehouse 12 in New Haven continues its Fall 2018 Concerts Series this Friday night with a visit from drummer Devin Gray and his quartet know as Dirigo Rataplan.  He's celebrating the release of the group's second album "Dirigo Rataplan II"  - besides Gray, the group features bassist Michael Formanek, tenor saxophonist Ellery Eskelin, and trumpeter Dave Ballou (the same lineup as on the 2015 self-titled album released onSkirl Records). This is one of those delightful groups that blurs the lines between styles (or genres, if you'd rather) so you'll hear snatches of blues, "free" jazz, funk, folk elements, a trace of Ornette Coleman-like interplay, and impressive interactions.

Dirigo Rataplan takes the stage for the first set at 8:30 p.m.  The second set - a separate charge - starts at 10 p.m.  You should enjoy this exploratory music not only for the way the band digs into the music but also because each musician has a distinctive "voice".  The crisp attack and sound of Ballou, the smooth yet searching tones of Eskelin, the melodic majesty of Formanek's bass playing, and Gray's exciting yet thoughtful drumming.  To find out more, go to devingraymusic.com.  For tickets, call 203-785-0468 or go to firehouse12.com.

Here's a short compilation of the album (which, on Bandcamp, is titled "Dirigo Rataplan II" - go figure. 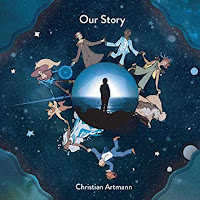 On Saturday evening, The Buttonwood Tree, 605 Main Street in Middletown, welcomes the duo of Christian Artmann (flutes) and Laszlo Gardony (piano).  They will be celebrating Mr. Artmann's new Sunnyside Recording, "Our Story", a quartet album (with guest vocalist) that Mr. Gardony (who often graces the piano seat at The Buttonwood with his exciting and melodic playing) is an important member of the group.  For the Middletown date, it's the two of them sans rhythm section (or guest vocalist).  Mr. Artmann's music is quite handsome, ethereal at times, and his flute sound is graceful and gracious.  He can also swing when the music calls for it.

Mr. Artmann studied classical music in his native Germany as he was growing up, discovering in his teens. He's studied at Harvard Law School, Princeton University, and the Berklee School of Music.  He has toured Europe playing in both classical and jazz settings as well as clubs and performance venues in the United States.  "Our Story" is his fourth album as a leader since 2010, three of them with the delightful rhythm section of bassist Johannes Weidenmuller and drummer Jeff Hirschfield. To find out more about the flutist, go to artmannjazz.com.

The music commences at 8 p.m. on Saturday.  For tickets and more information, go to buttonwood.org/event/laszlo-gardony-and-christian-artmann/.

Here's the opening track from the new album: