Steve Coleman's Elemental Music (And You Should Dance To It!)

The best person to describe the music of Steve Coleman is the man himself. The alto saxophonist, composer, conceptualist, and community educator/activist, he has spent over three decades creating his own musical language. The M-Base Collective, an organization that Coleman founded around 1984, takes its cues from the AACM from Chicago, the composer's hometown.  If you click on the link above, you can see how musicians have collaborated together as members of the various bands that Coleman leads or have worked with him in other ways. 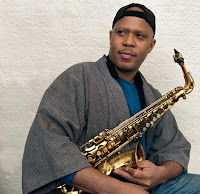 Over the decades, Coleman has led and continues to lead numerous ensembles but, most consistently, has worked with The Five Elements.  The current quintet, featuring Jonathan Finlayson (trumpet), Miles Okazaki (electric guitar), Anthony Tidd (electric bass), and Sean Rickman (drums), has been together for over five years.  That lineup's debut was the powerful 2013 "Functional Arrhythmias" (Pi Recordings). Both Rickman and Tidd had worked with Coleman in earlier versions of the group while Finlayson has been part of the the ensemble since 2000. Okazaki joined in 2009 while building his own solo career.  Over the past four years, the group has been involved in a series of weeks-long residencies in cities such as Chicago, Los Angeles, Detroit and others, that go beyond just concerts and into outreach to underserved communities and more. 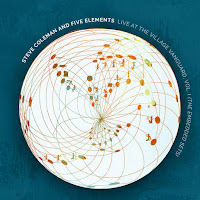 The ensemble's latest musical adventure is "Steve Coleman and The Five Elements: Live at The Village Vanguard, Vol. 1 (The Embedded Sets)" (Pi Recordings).  The two-disc, 150 minute, program was recorded during the Quintet's residency in May 2017 (Volume 2 was recorded at this year's residency).  Coleman fans do not need a review; they know to expect an amazing blend of rhythms, spontaneous melodies, intelligent interactions, and one tremendous rhythm section.  Coleman has stated that his musical style was greatly influenced by Charlie Parker - one can hear that in his tart tone, the rapid-fire riffs that often serve as melodies, and his energetic approach to solos.  What bassist Tidd and drummer Rickman do is make this music dance.  There are numerous examples throughout the two sets of rhythmic abandon.  Think of Clyde Stubblefield (drummer for James Brown in his most popular era, 1965-1974) and bassists Bernard Odums and Bootsy Collins (both who worked for Brown in that era) jamming backstage with Sun Ra or Albert Ayler.  Tidd and Rickman don't just drive this band, they help the music take alternate routes.

The music is, at turns, exhilarating, demanding, forceful, hurtling forward on the power of group interactions - whether the band is playing older material or working through brand-new compositions, the spirit of spontaneous improvisation can be felt from note one.  Even Coleman favorites, like his reading of fellow alto saxophonist Bunky Greene's "Little Girl I'll Miss You" has a spontaneous arrangement - you can hear it twice on Disk 1 and it's fascinating to hear the difference between the two. The unaccompanied alto intro remains (though Coleman changes his approach on each rendition) but how the band comes in is different and, of course, so are the solos.

Just pay attention.  If you do, you can bask in how Finlayson and the leader interact throughout, hear how Okizaki adds his distinctive voice to the songs, and, of course, the splendid rhythm section. Tidd's electric bass work is delightfully articulate while Rickman's polyrhythmic funk-swing-groove conjures up Sam Woodyard with the Duke Ellington Orchestra (check out "rmt/Figit Time" that opens the second set), Max Roach, Billy Cobham, and Dafnis Prieto without sounding like anyone in particular.

So, dig into "Live at The Village Vanguard, Vol. 1 (The Embedded Sets)", listen closely, and then go see Steve Coleman and Five Elements in person for yourself.  Try and stay in your seat.