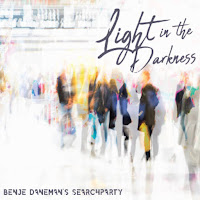 If you allow it to happen, music can come at you from all directions, with many different styles and intents.  So much of it rolls through through your head and you may only notice it when the sounds are raucous or a melody catches your attention.  Then, there are those albums that grab you from the opening seconds snd do not let go.  Hours, days, weeks later, you return and are seduced again.

"Light In The Darkness" (self-released) is the first album from trumpeter, flugelhornist, composer, and educator Benje Daneman. His sextet is called SearchParty and features a quartet of Chicago-based musicians including Greg Ward (alto saxophone), Rob Clearfield (piano), Andrew Vogt (electric bass), and Jon Deitemyer (drums) plus the leader's wife Ashley (voice, vocals).  The program blends ancient texts, fiery instrumentals, mediative solo and duo improvisations, into a story that resonates with spirituality, railing against the daily forces of negativity by creating positive music.

The album is bookended by two long tracks, the opening "The Light" and the closing "You Are The Light": both episodic compositions start quietly, the former being all instrumental while the latter has vocals, and build to powerful crescendoes thanks to the pulsating rhythm section and the forceful piano. Greg Ward's solo on the opening cut flies upwards propelled by Deitemyer's splendid drumming.  Clearfield, who has emerged as one of the finer and most melodic of pianists on the creative scene, follows, pushing the music with an energetic two-handed solo rippling with handsome phrases.  "You Are The Light" certainly has the feeling of a prayer, with Ms. Daneman's soulful vocal leading the way. As the band enters, echoing her melody line, the intensity level rises. Still, the following section has the alto sax, trumpet, and piano sharing short solo lines before the intensity once again rises and the voices begin to coalesce. The album powers it way to the finish with the drummer leading the way and the voices coming back in before the eventual fade to solo piano.

In between, there are several tracks such as "Lamps", "(Our Fear of) Exposure", and the title track that ask the listener to surrender, to listen closely, to contemplate, and to reflect. The world whirls around us, every day events transpire to tamp down our spirits, to turn us against our neighbors, to actively distrust the "other".  The Danemans and SearchParty implore us to trust again, trust in friendship that leads to collaboration, to fight for equality for all. The band does so without polemic, with music that easily glides across borders and that illustrates how words and musicians can heal.

"Light In The Darkness" has rocked my world since the album arrived a while back. Because I want to believe that we can change this world for the better and that must can do that.  Yes, it is true music can also build walls, stoke anger, separate generations but there is also music that can heal, can (if only for a few precious minutes) restore memory, and can create new memories.  Are the messages that Benje Daneman's SearchParty creates new ones?  Not truly (some of the lyrics come from Biblical Psalms), but we need to listen with fresh ears and open minds.  I needed this music at this time. Hopefully, you will find the joy in it as well.

The album will be released to the world on August 31, 2018.  For more information, go to www.benjedaneman.com.

Give a listen to the opening cut: 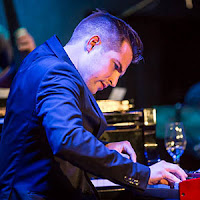 Pianist and composer Stu Mindeman may be best known for his current role as pianist for Kurt Elling. His father, a musician, moved his family to Santiago, Chile when Mindeman was quite young and the sounds and songs of post-Pinochet years infused him with love  for folk music of the country. They then moved to Chicago, IL. where he began a career that has seen him work with Branford Marsalis,  Antonio Sanchez, Gloria Estefan, Kendrick Scott and many more.  He has also been music director for the Second City comedy troupe.  His 2014 self-released debut album, "In Your Waking Eyes: Poems by Langston Hughes" stands out for the power of Sarah Marie Young's and the imaginative music that accompany the poems. 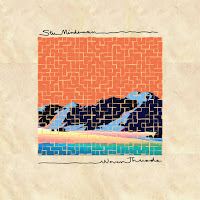 In 2017, Mindeman returned to Chile where he began to collaborate with vocalist Francesca Ancarola, bassist Milton Russell, and drummer Carlos Cortes Diaz.  All three appear on "Woven Threads", the pianist's new Sunnyside album. The music is a tribute to Victor Jara and Violeta Parra, both poets, singers, and activists whose lives were crushed by the Pinochet regime in the mid-1970s. When Mindeman returned to Chicago, he gathered a number of friends to help him flesh out the music.  People such as bassist Matt Ulery, drummer Juan Pastor (whose group Chinchano Mindeman works with), percussionist Yuri Hevia, violinist Victoria Moreira, drummer Makaya McCraven, saxophonists Geoff Bradfield and Greg Ward, trumpeters Marquis Hill, Victor Garcia, and Quentin Coaxum, guitarist Matt Gold, and several special guests appears throughout the program.

The music? It's quite a delight. The various percussionists create a lovely rhythmic cushion and the splendid vocals of Ms. Ancarola enliven four of the tracks.  (What's missing is the English translation of the lyrics - that's a minor complaint).  One does not miss the emotion in the opening traditional Chilean tune "Casi, Casi". The pianist does not jettison the original melody or rhythms but adds overdubbed vocals, horns, and strings as well as his expressive piano - yet, it is the powerful vocal that draws the listener in.  The vocalist digs into Jara's "El Aparecido" infusing it with love and empathy yet note the powerful string work of Ms. Moreira and Gold's equally powerful guitar. Jara's "No Puedes Volver Atrás (You Can Not Go Back)" closes the program and, even if you do not understand what she is singing, you can't help but feel the pain and sorrow. 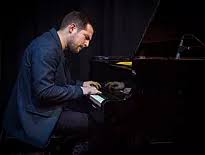 Kurt Elling appears on two tracks inspired by songs composed by Ms. Parra.  For both, lyricist Tim Stiles and the pianist remade the originals. "What Words" is a stunning ballad that also features the expressive alto saxophone work of Miguel Zenón. The handsome melody, supported by the quiet percussion of McCraven and Pastor and the thick bass tones of Russell, allows Elling to softly work through the lyrics - his voice rising out of Zenón's solo is otherworldly.  "A Thousand Stars" blends the fine trumpet work of Coaxum, the sweet backing vocals of Sarah Marie Young, and the leader's articulate piano: still, it is Elling's vocal genius (eschewing technical displays) in caressing the lyrics, giving them power in their beauty.

Other highlights include Miguel Zenón's delightful turn on the instrumental "La Rueda".  Mindeman's powerful piano lines atop the percussion of Pastor and excellent bass work of Ulery really propels the tune forward.  When the alto saxophonist steps out in front, the music takes on a dancing quality that is irresistible. French-Chilean rapper Ana Tijoux shines on "Sin Sentido (Without Sense)", her alto voice surrounded by trumpeter Hill and the overdubbed vocal wash of Ms. Young.  McCraven and Pastor really make the music dance and Mindeman's piano solo has a touch of Herbie Hancock's funkier work.

"Woven Threads' shines from beginning to end. Stu Mindeman makes this music accessible without losing its heart and soul.  The message that Victor Jara and Violetta Parra imparted to their native Chile and, several decades later, to the young pianist, is that music has power to make the world better. Just don't be silent.

The album will be released on September 14, 2018.  For more information, go to www.stumindeman.com.