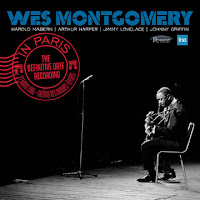 In his lifetime (1923-68), Wes Montgomery only made one trip to Europe as a professional musician (and none as a tourist). That makes great sense - he hated to fly! In 1965, he crossed the ocean via plane but crossed the European continent by train.  The year before, he had moved to Verve Records and started to get popular acclaim. In 1967, he made the move to A&M/CTI Records and began a short but profitable career working with producer Creed Taylor and arranger Don Sebesky (with whom he had worked at Verve).

Resonance Records has just released "Wes Montgomery In Paris: The Definitive ORTF Recording", a 2-CD set from his March 27, 1965 concert that has been one of the most popular jazz bootlegs of all time.  Reissue producer Zev Feldman was able to secure the master recording from the National Audiovisual Institute of France, the overseer of the Office of French Radio and Television (ORTF): working with Resonance label owner and sound wizard George Klabin and master technician Fran Gala, the album is finally official. 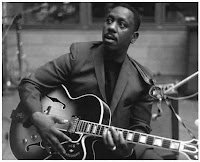 For the tour, Montgomery assembled a rhythm section that features pianist Harold Mabern, bassist Arthur Harper, and drummer Jimmy Lovelace.  Of the 10 tracks, only one is less than seven minutes and several stretch beyond 12.  Montgomery is in top form throughout the album.  If there is one track that defines the album, it's the highly rousing rendition of John Coltrane's "Impressions."  The guitar solo ranges from rippling single-note runs to his amazing "octaves" riffs and the jazzy block chords., all played as the rhythm section keeps up a torrid pace. Later on Disc one, the quartet plays Montgomery's "Jingles", another longer piece with great power and a stunning guitar solo.  Mabern, 29 at the time, is inspired by the guitarist and delivers a powerful solo that swings with glee. The slower tracks on the first disk include a Latin-tinged reading of "Here's That Rainy Day" but the keeper is the truly lovely reading of "The Girl Next Door" (composed by Hugh Martin and Ralph Blane as "The Boy Next Door").

Disk two opens with "To Wane", a Mabern composition that matches the power and energy of "Impressions."  Special guest tenor saxophonist Johnny Griffin joins the band for the next three selections.  Now a quintet, they start with a famous Montgomery piece "Full House", a tune and album the guitarist and saxophonist recorded in 1962.  Griffin's bluesy style fits well in this music. The ex-patriate saxophonist, who had moved to France in 1963, and Montgomery have great fun playing over the active rhythm section. A short piano solo opens "'Round Midnight" (very hip audience in attendance - they applaud the melody) before Montgomery leads in the theme and takes the first solo.  When Griffin enters he plays one line then sings a short reply and gets a big laugh from the band.  The solo that follows is actually quite serious and ranges far afield. Griffin has a great time on Dizzy Gillespie's "Blues and Boogie" - he enters quietly after Montgomery's romping solo but soon digs in and creates a rollicking statement, complete with quotes from several children's songs and more.  The rhythm section has a great time as well. When they drop out, Griffin goes it alone for over two minutes, riffing on a theme with great power and joy.

"Wes Montgomery In Paris", a bootleg no more, is 105 minutes of impressive musicianship, bluesy twists and turns, and melodic adventures.  The rhythm section gives the leader great support throughout and the addition of Johnny Griffin is a real treat.  The sound is quite good save for a bit of a drop off when Harold Mabern moves into the higher registers of the piano (his "comping" is quite audible).  The sound of the bass and drums is excellent throughout while the guitar  dominates without being harsh or annoying.  All in all, a treat for guitar fans and, especially, for people who like the jazzy side of Mr. Montgomery.

For more information, go to www.resonancerecords.org/release.php?cat=HLP-9032.