Producer Marc Free, who sets the pace at Posi-Tone Records, always signs his emails "Keep on swingin'" - that would certainly be the motto for this group the producer put together.  The sextet and its debut album is called "New Faces": the ensemble includes vibraphonist Behn Gillece, tenor saxophonist Roxy Coss, trumpeter Josh Lawrence, pianist Theo Hill and the "veteran" rhythm section of bassist Peter Brendler and drummer Vinnie Sperrazza.  Every member has, at least, one album on the Posi-Tone label or has been featured one of the label's many recordings.  The program is split between songs from deep in the label's catalogue, new pieces from the vibraphonist and the pianist plus Herbie Hancock's "King Cobra" (from his 1963 Blue Note Lp, "My Point of View"). 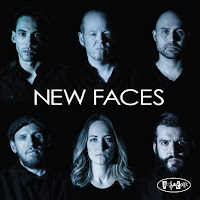 With its airy feel and open chords, the Hancock composition posits the album in the era of "progressive hard bop" - listen to how the rhythm section plays with the tempos under the soloists.  The piece simmers and it's that feel that permeates much of the album.  Opening with pianist Jon Davis's "Happy Juice", the music has a delightful swing, the melody glides forward, and the soloists (Lawrence. Ms Coss, and Gillece, each create swinging solos.  The second track, "Delilah Was a Libra", comes from one of the earliest albums in the label's catalog "Trapdoor" by the guitarist known as Edwing (issued in 1995). The piece has a modal feel and the rhythm section really push this forward - Lawrence, Hill, and Ms. Coss each create fine solos. 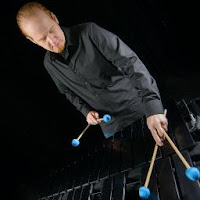 Of the three tracks composed by vibraphonist Gillece, "Down the Pike" leaps out of the speakers thanks to the drive supplied by Sperrazza, Brendler, and Hill.  The ethereal opening of his tune "Vortex" (with the chimes of his vibes) may remind some of the late Bobby Hutchinson's work on "Maiden Voyage" as will the handsome melody (Lawrence has a such a fine tone).  Ms. Coss does not rush through her tenor solo, enjoying the great support as she moves easily through the changes.   Gillece's final contribution, "Follow Suit", starts slowly but then the sextet takes off on a joyous romp with rapid-fire solos from the composer, Lawrence (one hears Lee Morgan in his playing), Ms. Coss (whose power matches that of the rhythm section, and closes with short statements from Hill and Sperrazza.

The hard-bop swing of Lawrence's "Hush Puppy" is a giddy trip through a sweet melody and strong solos.  However, he adds a delicious Latin concoction to the mix with his piece "Frederico."  Leading with his muted trumpet playing the melody with the tenor sax, the piece conjures up a smoky nightclub with the band having a great time. Pay attention to the excellent work of Hill whose background chords and fills are a lesson in how to create a fine foundation for the soloists. Of course, Brendler and Sperrazza keep everyone on their toes with their tasty accompaniment.

"New Faces" is a tasty concoction, an album that is sneaky good. On the surface, most of the music sounds "straight-ahead jazz" and it is. But, listen closely to the excellent rhythm section, to the intelligent choice of tunes, and to how the "front line" responds to all the different types of tunes. Best of all, it's fun to listen to.

For more information, go to www.posi-tone.com/newfaces/newfaces.html. 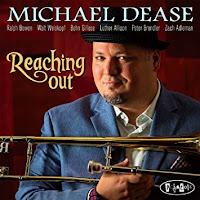 Trombonist and educator Michael Dease puts together a fine ensemble for his new Posi-Tone release (his fifth for the label).  "Reaching Out" blends his young rhythm section of pianist Luther Allison (who played drums on Deases's 2016 "Father Figure" CD) and drummer Zach Adleman (a student of the trombonist at Michigan State University as is Allison) with veterans Peter Brendler (bass), Ralph Bowen (tenor saxophone), Walt Weiskopf (alto and tenor saxophones), and Behn Gillece (vibraphone on three tracks). The program is an intelligent blend of standards, newer "pop" tunes, and several originals.  The reed players appear together on  eight of the 11 tracks. Bowen also has a smashing interaction with the leader and the rhythm section on the rapid-fire reading of Steve Turre's "Blackfoot" while Weiskopf joins Gillece on Dease's Herbie Hancock-like "The Chameleon Eye."

Dease reminds me a lot of fellow trombonist Steve Davis. He's possesses a buttery tone, can play in many different styles, is a top-notch educator and mentor. Plus, both men can swing with abandon. There are several tracks that "burn" from the opening notes.  The opening track, "Something In Common" (composed by Cedar Walton), simmers and features powerful solos from the leader, Bowen, Weiskopf (alto), and Gillece.   Deanne's "Tipping Point" may have the most fire on the album, with exciting solos from both the alto and tenor saxophonists, the leader, and a rollicking "trading 8's" with Adleman. 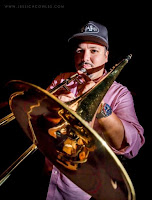 There are three fascinating covers on the album that speak to Dease's upbringing, the "pop" music of his youth,  "More Than Words", a big hit in 1990 for the metal band Extreme, is a sweet mid-tempo ballad with the reeds and brass playing sweet harmonies and counterpoint. Babyface's "Water Runs Dry" was a hit in 1994 for Boyz II Men and is given a similar arrangement to the Extreme tune. The sextet (all but Gillece) treat the melody with respect while Dease's solo has, at times, a fine vocal feel. Perhaps the biggest surprise is the inclusion of Paul McCartney's "Live and Let Die" - the original, because if its connection to the James Bond movie franchise, is, at times, bombastic. But Dease and company not only swing the heck out of the song but also give a strong blues feel.  There's a powerful "trading 4's" section with the brass and reeds and the vibes add a powerful touch in the final minute of the piece.

"Reaching Out" is melodic, exciting, and quite accessible. Michael Dease shares the spotlight throughout the album and both Ralph Bowen and WaltWeiskopf take full advantage of the solo space  (they trade phrases with abandon on "Morning Shade") as well as serve as smart counterpoint on a majority of the tracks. Pay attention to the contributions of the "kids", Luther Allison and Zach Adleman: they play well now and will only get better and smarter.  Posi-Tone "keeps on swinging" and we are the beneficiaries!