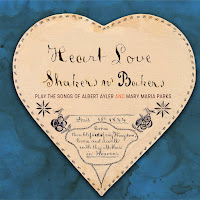 It's Valentine's Day 2018 and it seems obvious we could all use a "whole lotta love" (no Led Zep today though, thank you) and a revival of our spirits. To that end, tenor and soprano saxophonist Jeff Lederer has come to our rescue.  His Shakers n' Bakers crew has a new album.  "Heart Love: Shakers n' Bakers Play the Songs of Albert Ayler and Mary Maria Parks (little (i) music) revisits and updates three tracks from Ayler's controversial 1968 "New Grass" (critics thought the funky sounds beneath Ayler's talent) and three from 1969's "Music Is the Healing Force of the Universe". Lederer has been one of the late Ayler (he died just a year after the "...Healing Force...." Lp was released) and has recorded several albums based on material from throughout the saxophonist's career. 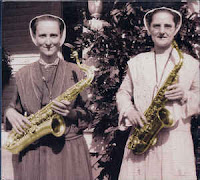 The album hits the streets on February 28 but the digital version can be purchased starting today by going to shakersnbakers.bandcamp.com/releases.

Listen to the track below and you'll get a good idea just how funky and far afield Shakers n' Bakers can go.  The band plays with great fire, the vocalists are perfectly matched (sweet and sassy, smooth and gruff), and Jeff Lederer plays with the fire that his fans and audiences have come to expect.

A review will post in a week or so but, for now, if this music fascinates you, give it a listen. Make sure to play it loud: it will do your heart good!