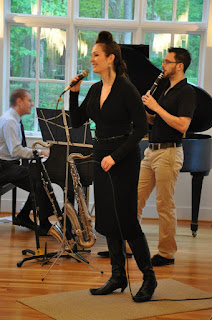 Pianist-composer Jeremy Siskind created the Housewarming Project after the 2012 release of his BJU recording "Finger-Songwriter." That splendid album (reviewed here) featured the attractive voice of Nancy Harms and the excellent reed work of Lucas Pino (clarinets, saxophones): early 2015 saw the release of  "Housewarming" (BJU) with the same lineup plus guest vocalists  Kendra Shank, Peter Eldridge, and Kurt Elling.  The two albums not only shone the light of the excellent interactions of voice and instruments. The first album featured 11 original compositions dedicated to poets and authors plus a delightful cover of Billy Joel's "All You Wanna Do Is Dance" (from 1976's "Turnstiles" album). The second album included nine originals, three standards, and an inspired rendition of Adem's "Everything You Need" from 2004.

The trio has spent considerable time performing "house concerts" (makes sense, giving their intimate sound) not only because the songs seem so personal but also it's easier to connect with the performers and see how they work, how they play, interact, and enjoy what they do.

2018 brings "The Housewarming Project", a multi-media venture that continues and builds upon what Siskind and his bandmates have been doing for the past six years.  The group started releasing videos on its YouTube channel in January and plan to continue into March.  Titled "at_Home/at_Play", the series features performances from the Blue Whale in Los Angeles and from videos made "at home" in San Diego, CA  The trio performs new pieces as well as revisiting songs from their albums.  Along with the videos, one can download a five-song EP (free or "name your price") from housewarmingproject.bandcamp.com/releases. And Siskind is blogging about all the songs which you can find by going to mfasiskind.wordpress.com.


One could just set the YouTube channel to continuous play and have your own house concert in your living room. There's a delightful blend of music. There's the uptempo and hilarious "If You Can Read (You Can Cook)" that features guest Dan Ogrodnik on pandiero, the quiet and wistful "Melancholy Times", the dramatic "Vanished Music, Twilit Water" (for Seamus Heaney), the sweet, jazzy, ballad "Whispering Grass", and rapid-fire "Sometimes I Wander." One could easily concentrate on Ms. Harms and the versatility of her voice, the emotional richness but you could - and should - pay close attention to the splendid keyboard work of Siskind, not just his technical prowess but the rich melodies he creates. Pino doesa delightful job of wrapping his clarinet sound around the vocal, sometimes shadowing the melody or playing counterpoint to the piano. The dark tones of his bass clarinet, the bluesy swagger of his tenor saxophone (check out his husky tones on the Gershwin-esque "The Inevitable Letdown" as well as the delightful "rent party" piano solo), all point to how important the reeds are to the overall tone of this Project.

The YouTube channel is found at www.youtube.com/channel/UCo23Y7J1cwrH5BWW6TPG6sQ - dig around, have fun, buy the EP, and check out this trio's fine recordings.

For even more information, go to www.jeremysiskind.com.