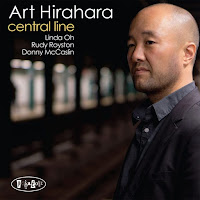 Pianist and composer Art Hirahara, born and raised in the Bay Area of San Francisco, has worked with vocalists Freddie Cole and Stacey Kent as well as baritone saxophonist Fred Ho and trumpeter Dave Douglas.  "Central Line" is his fourth album as a leader and his third for Posi-Tone Records. The new album changes the focus a bit from his previous two (2011's "Noble Path" and 2015's "Libations and Meditations") in that, sprinkled into the 14 tracks, there are four solo piano performances and four that add tenor saxophonist Donny McCaslin to the trio of Linda Oh (bass) and Rudy Royston (drums).

The variety of settings is a big plus in that the program moves from the introspective solo pieces to heartfelt ballads to more uptempo tracks.  McCaslin's appearances each stand out.  He and Royston stoke the fires on "Kin Ka: Gold Coin", the hardest-hitting piece, while his full-toned and emotional solo on "Astray" moves from sweet melody to blues to impressionism.  "Entanglement" also moves between lyricism and hard blowing for both the tenor and piano solos, bolstered by the splendid bass work and Royston's fiery percussion.  McCaslin and Hirahara team up for a playful duet for the first third of "Little Giant" that continues in its buoyant mood as the rhythm section and ratchets up the energy. 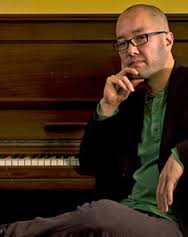 The pianist shares the opening melody of the title track with Ms. Oh; their interactions through the high-speed song, punctuated by Royston dances around the drums, is pure delight.  Yes, their playing is technically impressive but the melodic aspects of the piece remain front-and-center. "Drawing With Light" is a perfect title, a ballad with a strong emotional feel that picks up in speed and intensity, the piece culminating in a two-handed piano solo abetted by the flying bass lines and powerful drumming. There's a similar feel to "Sensitive Animal" but, while the energy certainly picks up in the middle, the piece stays on a lyrical track. Lyricism also stands out on the lovely trio version of Chico Buarque's "As Minhas Meninas." Ms. Oh's fine solo is a melodic treat as is her work on the free-form "Redwood Thaw", a short piece (1:56) on which the listener feels as if one is intruding on a private moment.

The solo pieces each have a story.  "Kuroda Bushi" is a traditional song from Japan with a stately melody line while "Introspect" is a lovely tone poem, also with a well-drawn melody.  "Tracing The Line" builds slowly, the melody unfolding and opening up  not unlike a Keith Jarrett solo improvisation.  The closing track is the beautiful and soulful "Yuyake Koyake" - composed by Kanichi Shimofusa (1898-1962), its lovely folk melody describes a late afternoon sky and is a perfect close to an impressive program.

"Central Line" deserves your attention. The music that Art Hirahara created for this program gives the listener an insight not only into his fine musicianship but also into his creative mind.  Each song is a story built from his experiences as a pianist, composer, world traveler, accompanist, and human being. Enjoy this journey.

Here's a look into the album and its creator: 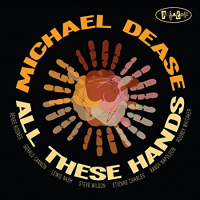 Trombonist, composer, arranger, producer and educator Michael Dease is one busy musician.  "All These Hands" is his 10th CD as a leader and fourth for Posi-Tone.  It's a musical tour of the United States and how jazz moved from town to city to region.  Dease has organized an impressive group of musicians with pianist Renee Rosnes appearing on seven of the 12 tracks, drummer Lewis Nash (6 tracks), bassist Gerald Cannon (5 tracks), Steve Wilson (flute, alto sax, soprano sax) and bassist Rodney Whitaker (4 tracks each), Etienne Charles (flugelhorn, trumpet) and guitarist Randy Napoleon (3 tracks each) and single appearances by tenor saxophonists Jason Hainsworth and Diego Rivera (on "Downtown Chi-Town") and bassist Rufus Reid and tenor saxophonist Dan Pratt joining Dease, Ms. Rosnes, and Mr. Nash on "Brooklyn."

Because I'm a writer and not a producer, the choice of "Creole Country" as the opening track is puzzling.  Not that the song is bad - far from it.  The piece is a swinging tribute to New Orleans but, compared to the following track, "Delta City Crossroads", a blues-drenched duet with guitarist Napoleon, the opener feels like more like a culmination of a history than a look at the source. Complaints out of the way, tracks such as "Good & Terrible" (which has the feel of mid-60s Jazz Crusaders) and "Downtown Chi-Town" (with the smart blend of trombone, flute, and the two saxophones) are splendid reminders of how jazz music takes in so many elements (blues, Latin rhythms, narrative, improvisation) and sounds fresh.  The interactions of Dease and Charles on "Chocolate City", their harmonies and counterpoint, mixing with the intuitive rhythm section, pull the listener in.

The intimacy of "Gullah Ring Shout" and the easy loping "Territory Blues" (both tracks featuring only trombone, guitar, and bass), plus the sassy humor of "Black Bottom Banter" (a duet with Whitaker) illustrate the versatility of the leader.  Dease can do "gutbucket", smearing notes as if walking down Basin Street, as well as display the fluidity of J.J. Johnson in a club on 52nd Street. The trombonist knows the history of his instrument, its role in 20th Century Creative music (and more, such as when he displays his "multiphonics" technique a la the late Albert Mangelsdorff on "Gullah...") but he foregoes technical brilliance in favor of telling these stories.  He certainly loves to "swing" and to dance; can't miss the joy on "Bennie's Bounce" or the spirited, decidedly funky, three-way conversation of "Memphis BBQ & Fish Fry" with Ms. Rosnes (electric piano) and Mr. Wilson (soprano sax). Let's also give him credit for big ears. The final track on the album, "Up South Reverie", is a stunning unaccompanied bass spotlight for Whitaker, his friend and colleague from Michigan State University.

"All These Hands" not only pays tribute to the music born from the hardships,f rustrations, faith, and dreams of African Americans but also to the dedication of musicians to keep the music alive.  "Alive" here means not just in the classroom but also in the clubs, concert halls, living rooms, theaters, basements, etc, in the United States and around the world.  Michael Dease is active both playing and passing on the tradition - we listeners and his students are the grateful beneficiaries of his dedication, talent, and knowledge.