Catching Up In The New Year (Pt 2)

Composer, arranger, conductor, guitarist, and leader of the Jazz Composers Alliance, Darrell Katz has been living in Boston, MA, since the mid-1970s. He created the JCA in 1985, an organization that commissioned new works from national, international, and local composers, put on concerts, sponsored composition competitions, and supported ensembles.  Since 1992, the JCA has recorded 12 albums for companies such as CADENCE Jazz Records, CIMP, Innova Music, Leo Music, Accurate Records, and the defunct Northeastern and Brownstone labels.  To my ears, Katz has carried on the compositional tradition of Julius Hemphill (1938-1995) in that his music is always a fusion of blues, avant-garde, poetry, improvisation, disparate elements thrown together that reveal their connections after multiple listenings (if ever). The first two JCA recordings featured Hemphill as well as Sam Rivers as guest soloists. 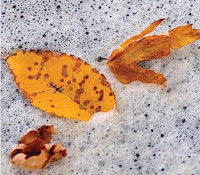 Album #12, Jailhouse Doc With Holes In her Socks, is the first for the JCA's own label (JCA Recordings) and is dedicated to Paula Tatarunis (1962-2015), Katz's wife, who was a physician (among other jobs, spent 10 years working in a medium security prison) as well as an accomplished and published poet. Six of the 12 tracks feature her poems while one, "Like a Wind", sets the words of Sherwood Anderson to music (the piece has appeared on two previous releases).  10 tracks feature the septet Oddsong. Composed of vocalist Rebecca Shrimpton (her 7th recording with Katz), Helen Sherrah-Davies (violin), Vessela Stoyanova (marimba, vibraphone), and the saxophone quartet of Jim Hobbs (alto), Rick Stone (alto), Phil Scarf (tenor, soprano, and sopranino), and Melanie Howell Brooks (baritone), the ensemble plays a fascinating combination of Katz's pieces as well as one,"LLAP Libertango", which is based on Astor Piazzolla's "Libertango 1974" and arranged by Ms. Sherrah-Davies plus the opening "Prayer", which is a group improvisation.

The title track has is a bluesy, rhythmic, jaunt with the Hemphill signature in the "walking" lines of the baritone but note how the violin and marimba are equal members of the ensemble (check out the interactions of Ms. Stoyanova with Ms. Howell-Brooks).  Hobbs takes a blistering solo followed by a dialogues between Stone and Scarff (tenor). Ms. Shrimpton takes the lead on "Tell Time" sharing the melody with the violins and reeds while the marimba holds the rhythm. The afore-mentioned Piazzolla piece blends a South Indian rhythm with the modern tango the composer created and it's a fascinating mix (and an impressive arrangement). "Gone Now" is a remake of the opening track from the Katz-Tatarunis 2002 "The Death of Simone Weil" and is a wonderful episodic piece that combines elements of blues, tango, and more underpinned by the saxophone quartet. Late in the piece, Hobbs and Howell-Brooks have a short, fun, dialogue before the ensemble returns.  The final track Oddsong appears on is a remake of "Red Blue", Katz's tribute to Julius Hemphill which has been recorded with several different ensemble on previous recordings (and appears again as part of thefts track on this disk). It's a rollicking piece in which each voice is important to the music (all this without a solo).

The final two tracks, both recorded in concert, feature two different ensembles.  "Ye Watchers And" feature Ms. Shrimpton, Ms. Sherrah-Davies, Ns. Howell-Brooks (bass clarinet), Scarf (sopranino), plus Bill Lowe (tuba), and Hiro Honshuku (flute); the music has a "free" feel as the text conflates Advent/Christmas with a basketball game in a venue with a Jumbotron. The JCA Orchestra shows up 20 strong on the "The Red Blues/Red Blue" which pairs Ms. Tatarunis's poem about Hemphill with Katz's tribute composition. Special guest Oliver Lake creates an alto sax solo that will tear your speakers to shreds.  Later in the piece, he joins the reed section for a quick-building improvisation that leads into Honshuku's EWI (electric wind instrument/controller which makes his flute sound like a synthesizer) solo pushed by the impressive drive of drummer Pablo Bencid.   The entire ensemble returns as Ms. Shrimpton sings the final two verses of the poem.  The richness of her vocal tones matches the timbre of the saxophones adding a rich emotional quality to the words.  Mr. Lake takes a quick coda before the vocalist rides out on the word "blues."

"Jailhouse Doc With Holes In her Socks" is quite a project.  Though it can be viewed as a memorial to Paula Tatarunis, the vitality of her words and how Darrell Katz frames them, creates melodies out of them, uses the voices of Rebecca Shrimpton and the musicians to enhance the poetry. The poet lives in her words while the composer gives the listener a gift of her "presence" and the ensembles makes us hear with fresh ears.  Don't search for style (is it jazz or classical?), just listen and soak in the sounds.

For more information, go to www.darrellkatz.com.  The composer and loving husband has also kept Ms. Tatarunis's blog alive.  Go to paulashouseoftoast.blogspot.com and look at her images of nature (that's her images on the album jacket), read her words, get a feeling for her passions.

Mark Dresser Seven - Sedimental You (Clean Feed Records) - Bassist, composer, and conceptualist Dresser first came to critical notice in the 1970s while playing on the West Coast in both free jazz and symphonic ensembles.  He moved to the East Coast in the mid-1980s to play with Anthony Braxton and has since worked as an educator, bandleader, and sideman in numerous institutions and groups.  Recently, he has been part of Trio M (with Myra Melford and Matt Wilson) as well as the trio known as Jones Jones (with  saxophonist Larry Ochs and percussionist Vladimir Tarasov) while teaching at his alma mater, the University of California/San Diego.  Plus, he is a pioneer in "telematics", described as  the interface of computers, communication, and performance" - he has worked, performed,and recorded   with musicians around the world in "real time." Dresser is a most expressive bassist with a rich tone, splendid technique, and an ear for melody and counterpoint that stands out among his contemporaries (on any instrument. 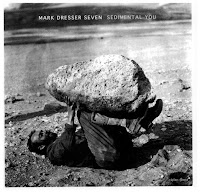 "Sedimental You" is a collection of seven compositions for seven musicians, an impressive ensemble that includes Nicole Mitchell (flutes), Marty Ehrlich (clarinets), David Morales Boroff (violin), Michael Dessen (trombone), Joshua White (piano), and Jim Black (drums, percussion).  The album, issued in the fall of 2016, includes several pointedly "political" musical screes including the opening "Hobby Lobby Horse" and "TrumpinPutinStoopin"; the former is a rambling, loose-limbed, romp with impressive solos all around while the latter may remind some of the musical commentary Charles Mingus created in the 1950s and 60s, the instrumental voices - in this instance, the trombone - making the ridiculous sounds like the people in the song's title.

Even when the music is not overtly political, Dresser and company have a lot to say.  The title track is a deconstruction of the standard "I'm Getting Sentimental Over You" (music composed, fittingly, by George Bassman) which, over the course of 12:44, runs the gamut from cocktail lounge music to disheveled blues (Dessen's expressive trombone solo) to noisy interactions (Black's solo over an extended reading of the theme). Three tracks are dedications to colleagues of the bassist. "Will Well" is for trombonist Roswell Rudd and is a lovely ballad with fine playing all around (the interweaved solos of Ms. Mitchell and Ehrlich is particularly striking).  "I Can Smell You Listening" was composed in memory of vocalist Alexandra Montano (1961-2007) - she, Dresser, and vibraphonist Matt Moran had played a gig on the West Coast the day after 9/11/01. This song moves from quiet contemplation to fiery solos by Ehrlich and White to a lovely impressionistic melody for flute, violin, and trombone that culminates in a striking bass solo.  The final track on the album, "Two Handfuls of Peace", was composed for Dresser's friend and mentor Daniel Jackson (1937-2014) and is a short, through-composed ballad that is lovely without being treacly. 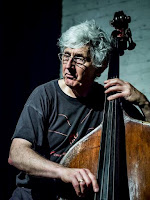 The longest track on the disk (14:15) is "Newtown Char", a musical response to the mass shootings in Newtown CT and Charleston, SC. Opening with a powerful bass clarinet solo, the piece moves into a jumpy rhythmic feel (Black sets quite a pace) over which each member of the ensemble solos (save for Dresser, who is unaccompanied).  There is great power in the angry reactions and equally frustrating resignation in this music but also a commitment to continue to fight for justice and equality.  Yes, I am projecting my own feelings into this music but there is plenty of room for interpretation. Music can uplift as well as educate even as it entertains.  "Sedimental You" does all that and more.

For more information, go to www.mark-dresser.com.