Catching Up In The New Year (pt 1)

2017 is upon us but I can't let a number of the CDs I received in 2016 to go unnoticed and unreviewed (by me).  Over the next week, I'll shine a spotlight on a number of deserving albums. 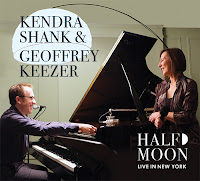 Kendra Shank & Geoffrey Keezer - Half Moon: Live in New York (Ride Symbol) - Once upon a time, one could go to a smoky nightclub to hear a vocalist and pianist work their way through a program of standards, an intimate setting for music that reaches deep into the soul. Nowadays more often than not, the "intimate" setting is a living room as "house" concerts are more more and more common (although, I suppose, the "rent parties" of the 1920s could be considered "house" concerts.)

The duo of Kendra Shank and Geoffrey Keezer came together when the vocalist was in need of a pianist for a quartet date on the West Coast and Mr. Keezer filled in.  They discovered a "simpatico" that, although this is not a "working duo", is there on every gig." What also stands out on this album, recorded on January 3 of 2015, is how both voices stand out without either person stealing the spotlight.

"Alone Together" is a perfect opening track. The song displays how Ms. Shank creates her vocal off of the piano lines. After the opening theme, the duo create counterpoint, go in different but sympathetic directions, changing the dynamic constantly. The "impressionistic" piano solo inspires a splendid "scat" solo. The way they reenter the lyrics is magical.

This recording has so many of those magical moments.  From the quiet corners of "Kneel" (a brilliant song poem composed by Jeremy Siskind) to the improvised "Half Moon" (inspired by the light one can see on the album cover and in the video below) to the pair of Abbey Lincoln songs (the playful "The Music is the Magic" and the tender yet bittersweet ballad "When Love Was You and Me", Ms. Lincoln's lyrics set to Thad Jones's "The Summary"), this concert pulls the listener in closely.  You listen for the turns of phrase in pieces such as in the sprightly "Life's Mosaic" (music by Cedar Walton) and the joyful "I'm Movin' On" (composed by Judy Niemack and Kirk Nurock).

The intimacy is never forced. As personal as the music can be - "Healing Song" is an original tune inspired by Ms. Shank's recovery from a back injury - this music reaches out to touch on our own personal experiences, from deep heartbreak to expansive love and more.  The best way to listen to "Half Moon" is to sit back and listen to the whole program.  You'll be surprised and impressed each time by the musicianship, by the creativity and freedom of both vocalist and pianist, And, yes, by the intimacy.  One also hears how this album has tinges of the great Tony Bennett/Bill Evans duos from the 1970s as well as the work pianist Ran Blake has been doing this decade with Sara Serpa and Christine Correa (which refer back to his 1960s work with Jeanne Lee);  Yet, this duo succeeds handsomely in creating its own personality.  Kudos to Kendra Shank and Geoffrey Keezer for this great recording and for the many hours of pleasure it gives and will continue to give.

Here's the duo live on the night of the recording (note the lamp): 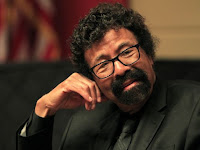 2016 was a great year for music and terrible in the sense that the world lost so many great artists.  Composer, arranger, author, and educator David Baker died in March at the age of 84.  Baker, a native of Indianapolis, Indiana, was known for his trombone work in the 1950s with composer George Russell's Sextet as well as the Quincy Jones Orchestra but a traffic accident he had suffered in the early 1950s curtailed his horn playing by the early 1960s.  He countered by turning to cello.  But, David Baker is most famous for his work in the field of education.  In 1968, he founded the Indiana University Jazz Studies which he headed until 2013.  He was named a NEA Jazz Master in 2000. Buselli-Wallarab Jazz Orchestra recorded Basically Baker Vol 2: The Big Band Music of David Baker (Patois Records) in June of 2016, nearly a decade after releasing Volume 1 (which is set to be re-released by Patois later this year).  The 21-member orchestra, conducted by Brent Wallarab (who studied with Professor Baker and teaches at Indiana University) feature many alums of the IU program including some names you may be familiar with such as saxophonist Rich Perry and trumpeter Tony Kadleck who both play with the Maria Schneider Orchestra. Special guests Randy Brecker (trumpet) and Dave Stryker (guitar) appear on one track, the lovely ballad "Kirsten's First Song."

According to the liner notes, much of the material on this Two-CD set "comes from (Baker's) first decade at Indiana University" (approximately 1966-1975), a time when big bands such as Thad Jones-Mel Lewis were beginning to be noticed, even as Duke Ellington, Count Basie, and Woody Herman still brought in audiences.  Overall, this is not "ground-breaking" material but the songs are so melodically rich and the arrangements so intelligent that the music does not sound dated at all.  The one non-Baker composition, Dizzy Gillespie's "Bebop", is a dazzling display of musical derring-do in the solos as well as the sparkling section arrangements (plus a "shout-out" to the fine rhythm section of pianist Luke Gillespie - no relation to Dizzy - bassist Jeremy Allen, and drummer Steve Houghton.) 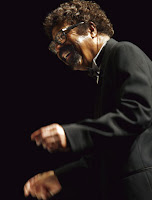 Playful moments abound.  The album opens with "Harlem Pipes" (dedicated to Marian McPartland), a high-energy romp, the great swells of brass underpinned by an active rhythm section and the fine baritone saxophone work of Ned Boyd. The buoyant bop of "The Georgia Peach" displays ample blues roots plus fine solos from co-leader Mark Buselli (trumpet), Freddie Mendoza (trombone), and Rich Perry.  Love the Afro-Caribbean strut of "Walt's Barbershop" and the Ellingtonian styling of "Black Thursday" but it's the gorgeous 'Soft Summer Rain" and its evocative soprano saxophone melody (unidentified musician) that might just take your breath away. The deep tones of the bass trombone and tuba build the foundation of the piece while the reeds and brass ebb and flow behind the melody.  Sweet solos by Perry and trombonist Tim Coffman (the rhythm picks up for the latter solo) stand out.

The handsome brass fugue that opens and closes "Honesty", the delightful reeds and brass interactions on "25th and Martindale" (named for the area where the composer grew up in Indianapolis), and the bouncy blues of "Terrible T" are highlights on the second disk. Still, it's there afore-mentioned "Kirsten's First Song" (composed for Baker's granddaughter) that resonates deep within the soul.  From Gillespie's solo piano opening to fine solos by vibraphonist Mitch Shiner, Brecker, and Stryker to the sweet celeste and guitar coda at the close (Monika Herzig and Stryker), the music is a lullaby writ large.

I've not heard any of the music created by the Buselli-Wallarab Jazz Orchestra before but, based on this fine recording, one can tell they are quite a professional group.  Because the majority of the members who appear here have had contact with David Baker as students, fellow musicians, and appreciative fans, the performances on "Basically Baker Vol 2" have great emotion and spirit, just like the person who created the music and arrangements did during his productive lifetime.

For more information, go to www.patoisrecords.com.