Guitarist Julian Lage is a musician one might be tempted to call a "journeyman" if he was 58 instead of 28.   Since first coming to critical notice at the age of 8 in the documentary film "Jules at Eight" (check a clip out here), he's had an amazing career including playing at the GRAMMYs at the age of 12, playing and touring with vibraphonist Gary Burton at the age of 16 and so much more.  His discography features duets with Fred Hersch, Nels Cline, and Chris Eldridge, a solo acoustic guitar date, 2 with his Quintet, and, now there is "Arclight" (Mack Avenue).  On this album, Lage plays only electric guitar in the company of Scott Colley (bass) and Kenny Wollesen (drums, percussion, vibraphone).  It's a concise program, 11 songs in 37 minutes, and lacks for nothing.

From the rumbling blues-rock of "Fortune Teller" to the avant-swing of "Activate" to the sweet ballad sounds of "Ryland", the album is filled with melodies, notable for its interactions, and although neither Colley nor Wollesen get a solo, they are an integral part of the brilliance of the music.  7 of the tracks (including the 3 listed above) are Lage originals plus there are 4 intelligent "covers.  There's the Django Reinhardt inspired swing of Gus Kahn/Charles Daniels 1927 "Persian Rug" (splendid brush work from Wollesen), the lovely ballad"Nocturne" from the  British composer, bandleader and journalist Spike Hughes (1908-1987), an interactive take of Irving Kahal/Sammy Fain's "I'll Be Seeing You" (Colley and Lage each take turns playing the melody while the drummer pushes them forward) and a ripping reading of W.C. Handy's "Harlem Blues", adapted from a 1920s arrangement by bandleader Willard Robison. The final track is one of several that remind this listener of the trio work of Bill Frisell, Kermit Driscoll, and Joey Baron from the 1990s.

This album has such fascinating sound choices. In the midst of the rocking "Prospero", Lage's ripping guitar lines share the melody with the vibraphone.  Sounds like a marimba on the opening of the appropriately-named "Stop Go Start" which brings to mind the exotica of Martin Denny as interpreted by Kip Hanrahan.  Colley's rich bass lines take the lead melody on "Presley" before Lage enters and the piece takes off on the power of the guitar solo over Wollesen's charging drum work.

If you enjoy the guitar work of Mr. Frisell, Brad Shepik, John Scofield, and Jeff Parker (among others), "Arclight" is for you. While Julian Lage does not sound like any of those guitarists, his rapport with Scott Colley and Kenny Wollesen will remind you of other guitar trios, ones in which all members have equal say in the presentation.And, it's great fun.  For more information, go to www.julianlage.com. 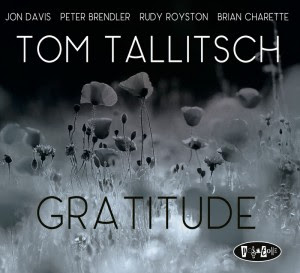 From the opening seconds of the first track "Terrain", it's easy to understand why the new Tom Tallitsch CD, titled "Gratitude" (his 4th for PosiTone Records), is so enjoyable.  The music sounds like vintage John Coltrane, circa 1975, powerful yet accessible and played by a band that is on fire.  The tenor saxophonist surrounds himself with such great players including pianist Jon Davis, bassist Peter Brendler, and drummer Rudy Royston (organist Brian Charette shows up on 2 of the 11 cuts). My affection for the amazing work of Mr. Royston is no secret and the bassist, one of the more melodic and focussed musicians, is very impressive. Davis, who worked with bassist and composer Jaco Pastorius, is a two-fisted delight, supportive and adventurous.

Tallitsch provides his band with a number of strong vehicles, not only for his rich, blues-drenched, sax but also making sure to give everyone a chance to shine.  Listen to how Brendler and Royston drive "Refuge", their acceleration pulling the sax and pain with them. As is his won't, the leader does not overplay.  He tends to caress melodies instead of roaring through.  The group's take on John Lennon's "Because" starts slowly and sweetly, building during the saxophone solo and hitting its stride during Davis's strong solo.  The bass counterpoint is also quite nice. Charrette shows up on the other 2 "covers", "Gold Dust Woman" (by Stevie Nicks) and "Thank You", one of the few slow tunes on "Led Zeppelin II" (composed by Robert Plant and Jimmy Page).  The folky quality of the original version can be felt on the latter track; with the addition of the organ, one hears the influence of The Band.  The tenor solo near the close of the tune hews closely to the melody and one can hear the gratitude from the lyrics.
Several of the cuts are really barn-burners.  Beside the CD opener, "Alternate Side" fires on all cylinders without overheating.  Tallitsch really digs into his solo, romping atop the active cymbal work and the fast-paced "walking" bass lines. A big dollop of funk is the basis for "Rust Belt" - Brendler's thick foundation and Royston's snappy snare work set the tone with the leader and pianist playing with great delight.  Turn it up and watch the speakers shake. More of that Coltrane/McCoy Tyner power enlivens "Oblivion", the tension created by the rhythm section is thick but enjoyable.

The soulful sounds of the title track serve as a good reminder that the best music is about melody, rhythm, intelligent interplay, and emotion. Jon Davis's splendid solo on "Gratitude" has so much soul as does the excellent bass work of Peter Brendler; when Tom Tallitsch enters, he plays with such ecstasy goosed on by the impeccable playing of Rudy Royston.  This music sounds so good - engineer Nick O'Toole has such a knack for capturing rhythm sections while not ignoring the front line - and it feels quite good as well. With "Gratitude", Tom Tallitsch has, arguably, created the best recording of his career.  Keep them coming!

Have a listen to the Stevie Nicks tune: