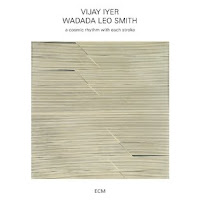 Trumpeter and composer Wadada Leo Smith and pianist Vijay Iyer have worked together in the past with Iyer a member of Smith's Golden Quartet and Quintet. The duo's new ECM release, "a cosmic rhythm with each stroke", is a powerful work with the focus in the 7-part, 52-minute, title track. Co-composed by the duo, the strikingly handsome piece is inspired by and dedicated to the visual artist Nasreen Mohamedi (1937-1990). Currently, the Metropolitan Museum of Art in New York City is celebrating her life and work (check it out here) and Mr. Iyer is currently Artist-In-Residence in the new Met Breuer (as I write this, the Gallery is in the midst of the third week of the performance series curated by the pianist.  The Iyer-Smith Duo is scheduled for 3/30-31 and it's already sold out).

As for the recording, the music is emotionally rich, at times incredibly quiet with faint low rumblings from Fender Rhodes and other electronics (all played by Iyer) yet there is the clarion call of Smith's trumpet rising up an around the crystal-clear piano lines. There are so many mood shifts in the suite yet none of the music is rushed. Free-wheeling clusters of piano notes jostle with rapid-fire jabs at piano and, in the final section (subtitled "Notes on Water"), the different timbres of the Fender Rhodes help the suite float to a close.

The program opens with the pianist's "Passage", a perfect lead-in to the suite in that this music sets the tone. The music moves forward on the powerful chordal melody and the trumpet's long tones.  The final track, "Marian Anderson", is Mr. Smith's tribute to the great singer and human rights activist. The music does not attempt to imitate the great sounds of Ms. Anderson but creates an abstract portrait of melody lines that rise and fall like breathing, the solid, somber, piano chords giving the trumpet freedom of movement.

Vijay Iyer and Wadada Leo Smith, in creating "a cosmic rhythm with each stroke", not only celebrate the life and work of very impressive many of us have not heard of before but also have produced music that allows the listener to get lost in the sounds and the silences, the quiet volume and harder attack. This is timeless music that works its way into your heart and mind, bringing a sense of wholeness and peace. 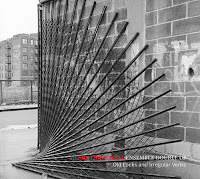 On the heels of 2015's "In for a Penny, In for a Pound", arguably one of the year's 3 best recordings, Henry Threadgill puts down his instrument but not his pen and creates "Old Locks and Irregular Verbs" (Pi Recordings).  The 4-part, 47-minute, multi-sectioned composition is his tribute to his dear friend Lawrence "Butch" Morris (1947-2013) played by an septet known as Henry Threadgill Ensemble Double Up including Zooid regulars Jose Davila (tuba) and Christopher Hoffman (cello) plus drummer Craig Weinrib, alto saxophonists Roman Filiu and Curtis MacDonald (also the composer's copyist) and - surprisingly, for a group led by Threadgill - pianists Jason Moran and David Virelles.
What's not surprising about this music is the importance of the rhythm section. , ,Hoffman, Davila, and Weinrib really drive the 19+ minute "Part One", giving the music depth and a sense of forward propulsion.  The tuba often pairs with the pianists to hold down the bottom.  Due to the compositional style of the leader, both alto saxophonists sound like Threadgill which, at times, is off-putting. But the power of the music, the swirl of saxophones, pianos, and the cello as the opening section slows down, the deep lines from the tuba, draws one in.  "Part Two" starts with just cello and tuba in an off-kilter call-and-response that soon stops.

There is a short full band section then Weinrib plays a melodic then forceful solo that leads directly into "Part Three."  Hoffman's powerful bowed solo over the active rhythms of the drums and piano has an intense feel but, when MacDonald enters for his solo, the bottom shifts a bit, both pianists "stroll" through the background while Davila and Hoffman (now pizzicato) parry-and-joust from down below. Virelles plays a long, exciting solo (with Moran commenting now and then) before Filiu takes off on a powerful flight. About 12:30 into the 16:39 section, the band stops altogether, there's a moment of silence, then there's a series of short duets and solos which soon opens to a more rhythmical give-and-take leading into "Part Four."  There's a magnificent 2 piano conversation that begins quite melodically before building in intensity.  When the rest of the group enters, they play the elegiac melody from a few minutes before.  Slowly, the sound surges, builds up again, higher and higher pushing upward then long tines from the saxophones followed by the tuba, fade out to....silence.

Henry Threadgill has been a vital member of the contemporary music scene for over 5 decades. On occasion, his music disappeared under the onslaught of "smooth jazz" or the Young Lions embrace of hard bop but the composer persevered.  Since the beginning of the 21st Century, he's been releasing impressive albums and working with the likes of Wadada Leo Smith and Jack DeJohnette.  His 7 albums with Pi Recordings, 5 with Zooid, show his vitality and willingness to continue to grow and explore.
"Old Locks and Irregular Verbs" is challenging, satisfying, and original music - we live in such strange times yet recordings such as this gives one hope and joy.

For more information, go to pirecordings.com/album/pi64.