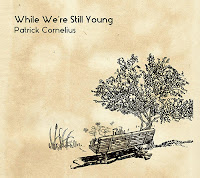 Musical inspiration can come from so many different places. For saxophonist, flutist, and composer Patrick Cornelius, the music on his 5th album as a leader, ""While We're Still Young" (Whirlwind Recordings) had as its "seeds" the poems of A.A. Milne that the Cornelius read to his young children before they went to sleep.

Before you start to think this is "kids" music, note the ensemble arranged for this production. Besides Cornelius (alto and soprano saxes, flute), there is John Ellis (tenor sax, bass clarinet), Jason Palmer (trumpet), Nick Vayenas (trombone), Miles Okazaki (guitars), Gerald Clayton (piano), Peter Slavov (bass), and Kendrick Scott (drums).   As I have written in reviews of earlier Cornelius CDs, he concentrates on melody and, like composers for larger ensembles such as Bob Brookmeyer, Gil Evans, and Maria Schneider, the solos grow naturally from the melodic material.  With the extra colors available in this album's musical palette, this material has more depth.

The program is divided into 6 "Movements", each taking its title from a Milne poem . The album starts with "Sand Between The Toes"; the opening section is a lovely prologue featuring the brass, alto sax and bass clarinet. Scott's propulsive leads the band in, pushing the handsome melody, played initially by alto and guitar, forward.  The different voices work around the theme until all drop out for a piano melody rises up and over the rhythm section (nice counterpoint from Slavov as Scott pushes forward.) That's followed by solos from Cornelius, Vayenas, and Okazaki before a return to the opening melody.

One of the more intriguing aspects of this music is that this is truly ensemble music. Yes, each track has solos; still each instrument has its voice in the story.  Okazaki, Palmer and Cornelius (soprano) each get to tell the story on "Water Lilies" (nice bow to Erik Satie right before the piano returns the song to the guitarist to conclude). "Jonathan Jo" jumps atop a modern start-and-stop "swing" beat before Ellis (on tenor) has a playful solo that leads into a snappy  and funky interchange for the ensemble before Clayton and Vayenas dig into their solos.

Lots to love on this album, from the Thad Jones' inspired "Lines and Squares" to the sweet sway of "The Invaders" (great section work) to the evening prayers that inspired the final track, "Vespers". If you really sit and listen, you can hear just how well these voices fit together.  There are many moments when it seems like more than 8 people are playing yet I do not detect obvious overdubbing.

"While We're Still Young" is a joy from beginning to end.  Patrick Cornelius, whose recorded music had always seemed mature, takes a giant step forward with this project.  Find the AA Milne poems, find the wonder and the exhilaration within, and then do the same with this music.  Those elements are there and so much more.

To find out more about this project and its participants, go to www.whilewerestillyoung.net.

The producer, along with Patrick Cornelius, of this album is composer, arranger, and educator Kyle Saulnier.  He teaches, as I do, at Quinnipiac University. I asked him about his role on this project.
He responded "I met Patrick in graduate school at the Manhattan School of Music, where we were classmates and we've been friends since. I got involved pretty early on as a sounding board for some of Patrick's compositions for the record, I think he was looking for some general feedback from a composer (though he's a spectacular writer, he hardly needed my input). He asked me to co-produce the recording since I was already familiar with the project and the charts themselves, and he was looking for some directorial assistance in the studio since he was also playing, which can limit one's objectivity in the studio."

Patrick chimed in with "Kyle is selling himself way short here. Not only did he give me actual arranging lessons (to help me remember many principles that I had forgotten lo these many years since I last wrote for a medium-sized ensemble), but he also GREATLY assisted me in the sibelius copy work when my scores were completely lost a month before the premiere due to an unfortunate accident involving my laptop and a full mug of coffee. He also helped me rehearse the ensemble so that I could concentrate on being a "sideman" and provided invaluable feedback and coaching during the record date. I basically gave him carte blanche to make decisions regarding takes, punches, do-overs, etc on the day of the recording for this same reason."

Here's "Sand Between The Toes" performed live at Berklee, courtesy of "The Checkout" and WBGO-FM: