Go Ahead! Try and Pick One + Mr. Ayler Goes to Sea

Despite the snow and ice that attacked Connecticut this week, the concert scene is bursting out like the daffodils.  Where to go, what to see, and how adventurous do I want be are the questions one should be asking because the variety listed below is impressive for our fair state.

Our list of goodies begins Thursday April 7 when The Side Door Jazz Club presents Dr. Lonnie Smith and his Trio in concert.  The good Dr. just released his new album, "Evolution", his return to Blue Note Records after 4 decades.  The funky album features his regular guitarist Jonathan Kreisberg plus drummers Jonathan Blake and Joe Dyson sharing the drum duties and a slew of guests including John Ellis (tenor saxophone, bass clarinet, flute), Joe Lovano (tenor saxophone, mezzo soprano saxophone), Robert Glasper (piano), Maurice Brown (trumpet), and Keyon Harrold (trumpet).  Smith, a native of Buffalo, NY, spent his youth listening to B-3 masters such as Bill Doggett and Jimmy Smith.  His first break came when guitarist George Benson hired him and the band moved to New York City. When he first signed to Blue Note, he also went to work with saxophonist Lou Donaldson.  Over the past 30 years as "organ jazz" went in and out of style, Dr. Lonnie Smith played gigs all over the world, recorded for numerous labels (including stints with Kudu, Criss Cross, and Palmetto), and always made audiences feel the groove.

Australian-born pianist Matt Baker bring his trio of Darrian Douglas (drums) and bassist Jim Cammack (a mainstay in the Ahmad Jamal since the 1980s) to The Side Door Friday night and they will swing the room with abandon (see the video below).  Baker has been in the US since the beginning of the decade and has steadily gained critical notice. His new CD, produced by the very busy Matt Pierson, comes out later this spring. To find out more, go to www.mattbaker.com.au.

The first set begins at 8:30 p.m. Take a closer look and give a closer listen here:

On Saturday, The Side Door welcomes trumpeter and educator Eddie Allen and his excellent Quintet.  Allen is a favorite in these parts (the photo on the left comes from the Monday Night Jazz in Bushnell Park) due to his unerring sense of swing and delight in melody.  Joining him for the Old Lyme gig will be the youthful Mercedes Beckman (saxophones), Seth Lewis (bass), Jerome Jennings (drums) and the great James Weidman (piano).

They will begin the evening of music at 8:30 p.m.  For more information, go to thesidedoorjazz.com.

On Friday, Firehouse 12 in New Haven continues its Spring 2016 Concerts Series with OGJB, a new quartet that features Oliver Lake (saxophones), Graham Haynes (cornet), Joe Fonda (bass) and Barry Altschul (drums). Both Mr. Lake and Mr. Altschul are 73 years old but are both playing at the high level they have maintained for the better part of 5 decades.  Joe Fonda is everywhere lately, touring with Katie Bull and Michael Musillami while supporting Archie Shepp in his recent NEA Jazz Masters performance.  Graham Haynes, the "baby" of the group at  55, has had quite a busy career in the US and overseas combining jazz and electronics, poetry and voice, into fascinating performances and recordings. The band has yet to release an album but just having these 4 musicians in the same room should be quite enjoyable.

Composer and arranger Maria Schneider, recently honored with 2 GRAMMYs at this year's ceremony, brings her 19-member Orchestra to the Jorgensen Center for the Performing Arts on the campus of the University of Connecticut this Friday evening at 8 p.m.  As of this moment, there are tickets still available (I will check after this is posted and keep you up-to-date.)  Honestly and arguably, there is no finer large ensemble in the world than the MSO. The writing is brilliant, arrangements are stunning, and the musicianship superb.  For ticket information, go to jorgensen.uconn.edu or call 860-486-6707.

Pianist, composer, and educator Laszlo Gardony returns to The Buttonwood Tree in Middletown on Saturday (4/09) to perform a duo concert with his long-time associate, bassist John Lockwood. Both are impressive improvisors as well as being students of the Great American songbook and the history of Jazz.  The Buttonwood P.R. says the duo will be playing originals but, no matter whose songs they play, the music will be well worth listening to.

For more information, go to www.buttonwood.org. 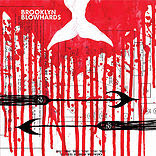 When one attempts to describe saxophonist Jeff Lederer, the words "exuberant", "dynamic", "elemental", and "fun-loving" come to mind. In concert with the Matt Wilson Quartet and the Honey Ear Trio, he can be and often is ebullient, a Puck-ish character whose approach to the tenor sax knows no limits.  In his own groups, Lederer's music blends blues, swing, hymns, gospel, and so much more. He has an affinity for the music and sound of saxophonist Albert Ayler (1936-1970) and has recorded a number of his works as well as dedicating several of his original pieces to the fiery musician.

Lederer's latest recorded adventure (and ensemble), titled "Brooklyn Blowhards" (Little (i) Music), blends his love for Ayler's music (5 of the 14 tracks are Ayler tunes) and sea shanteys - an unlikely match, you say, but ,when played by the octet of Petr Cancura (tenor saxophone), Kirk Knuffke (cornet, slide trumpet), Brian Drye (trombone), Art Bailey (accordion) and the percussion trio of Allison Miller, Stephen LaRosa, and Mr. Wilson (trap drums, ship's bell, chum bucket, chain), this music is so alive. Joining the ensemble on 5 tracks is vocalist Mary LaRose (Lederer's wife) and, on 3 tracks, guitarist Gary Lucas. There are moments when the music sounds like an unhinged Salvation Army Band (before and after the Cancura/Lederer duo on "Black Ball Line" and all throughout "Haul Away Joe") and cuts where the ensemble swaggers or romps with such panache (Ayler's "Heavenly Home" and his classic "Bells").  Check out Matt Wilson's "Dancing Waters", a truly lovely ballad with Ms. LaRose's wordless vocals and Lucas's sparkling dobro, underpinned by the swirling reeds and brass, building to an amazing climax on the power of the drummers, beginning and ending with a short chorale that sounds like a prayer. Lederer's "The Language of Resistance" is a stunning work for the octet, a spotlight for the leader's soprano sax and Bailey's fine accordion work.

Inspired playing abounds throughout the program.  Solos by Knuffke and Drye enliven the traditional "Haul on the Bowline" while the spiky slide work of Lucas shines on "Shenandoah." Ms. LaRose leads the way on the raucous take of Ayler's "Island Harvest" capturing the humor of the original version without imitating lyricist and vocalist Mary Parks. The multi-tracked voices on "Shallow Brown" blends sweetly with the dobro, the accordion swells, the martial drumming, and the sway of the horns.

"Brooklyn Blowhards" is serious fun, music that reaches back to music of early America while illustrating how Albert Ayler tapped into traditional musics, making it sound new and "free.'  Jeff Lederer, who arranged the entire project, was inspired by the brilliant work of artist Matt Kish, who created "Moby Dick in Pictures - One Drawing for Every Page".  Play this loud, let the music ring through the house while raising your glass to the ingenuity and vision of this splendid musician and his mighty band.

Here's a sample from "Brooklyn Blowhards" complete with artwork from the book: