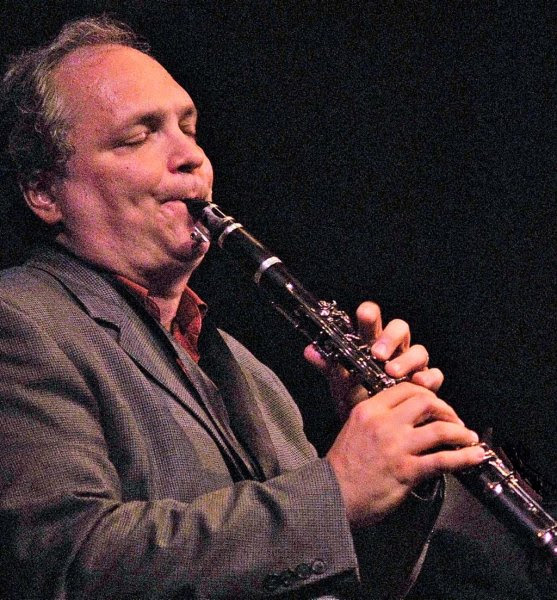 There is something about the clarinet that, in the right hands, can transform a room with a phrase.  Ken Peplowski (pictured left) has a set of the "right hands."  His long career includes stints with the Tommy Dorsey Band under the direction of Buddy Morrow, playing tenor saxophone in Benny Goodman's Band (the 1980s), recording with a wide range of artists from Rosemary Clooney to Madonna to Steve Allen to Marianne Faithful. He's recorded for Concord Jazz, Nagel-Heyer. Venus Records (where he recorded 2 albums of the same material, 1 on clarinet, the other on tenor saxophone), and, over the past 6 years, for the Colorado-based Capri Records. 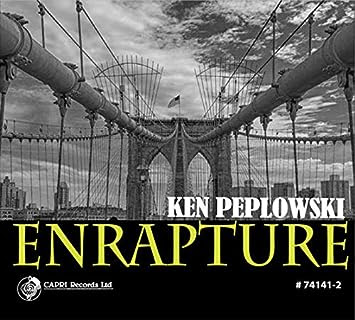 His new Capri CD, "Enrapture", continues his tradition of playing material from famous composers that is not so familiar.  And he does so with a quartet that features the splendid rhythm section of Martin Wind (bass) and Matt Wilson (drums), both whom appeared on the reed players 2013 CD "Maybe September", plus the Israeli-born, Italian-raised, New York City-schooled pianist Ehud Asherie.   The title track comes from the pen of pianist Herbie Nichols (1919-1963), a piece he never recorded but Peplowski found in a book written about the composer by trombonist Roswell Rudd (The Herbie Nichols Project did record the piece for its 2001 "Strange City" release on Palmetto). The lilting melody swings in that medium-tempo groove Nichols often employed and that some people would compare to Thelonious Monk.  The program opens with Duke Ellington's "The Flaming Sword", a very Cuban-inspired piece that appeared on the 1940 "Live at Fargo" Lp. Wilson sets a torrid pace and Peplowski soars atop the ensemble.

Other pleasant surprises includes a lovely clarinet-bass duet on John Lennon & Yoko Ono's "Oh, My Love" - short and bittersweet, the clarinet tone tugs at the heartstrings.  Even prettier (if possible) is "I'll Follow My Secret Heart", a Noel Coward piece from his failed 1934 Broadway musical, "Conversation Piece."  Here, the clarinetist hews close to the melody (one that he learned from a 1962 Frank Sinatra recording).  It's quiet, ever-so-gentle, the clarinet rising gently into the higher registers while Asherie paints the corners and Wind holds the bottom. Another lovely ballad is the Johnny Mercer/Barry Manilow collaboration "When October Goes", a song Peplowski heard Ms. Clooney sing - his handsome tenor sax paired with the floating chords from the piano over the fundamental bass lines and whisper-quiet brush work of Wilson give this such an emotional pull. There's a similar feel to "Cheer Up, Charlie" (from the movie "Willie Wonka and The Chocolate Factory") with the breathy tenor sax moving easily through the melody as Asherie decorates the spaces around the tune.

After the melodies have faded, the solos played and over (and "Fats" Waller's "Willow Tree" is a splendid closing track), what stands out most from "Enrapture" is how much joy there was in the studio on that one day in February of 2015. You can play the CD from beginning to end and then do it again without being bored - the music played by Ken Peplowski and friends is comfortable without being staid and emotional without being sappy. No political agenda, no axes to grind, just good music  played with delight.  For more information, go to kenpeplowski.com. 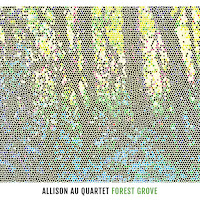 "Forest Grove" (self-released) is the second album from alto saxophonist and composer Allison Au and her Quartet.  Her late 2012 debut "The Sky Was Pale Blue, Then Grey", introduced to the listeners a person more interested in melody than technique as well as working within a group setting than being a lead voice with a supporting cast.  Like that debut, this new recording features Todd Pentney (keyboards, producer), Jon Maharaj (basses), and Fabio Ragnelli (drums).  With a several years and numerous gigs, the group is even tighter and more responsive - plus Ms. Au's new compositions have matured in that the melodies seem richer, longer, and the musicians' interactions and transitions seamless.

Th album (literally) kicks off with "Tides", the alto sax and drums introducing a quick melody yet the rhythm section is not hurried or nervous.  The juxtaposition of exciting sax/drums and the more cautious bass/electric piano creates a playful tension that erupts into several exciting solos.  Ragnelli's drum work will remind some of Eric Harland and Kendrick Scott is how he pushes the band, reacting differently to each soloist. The playful "Aureole" is a romp for all involved, the rhythm section setting a torrid pace, the Hammond B-3 burbling underneath the alto sax solo, and quick but meaty solos.

The addition of wordless vocals from Felicity Williams on 3 tracks gives each song an ethereal feel.  The sweet ballad "Bolero" pairs her in the melody with the saxophone, making the melody float easily forward.  The pairing lasts throughout the song, even behind the fine bass solo. On "The Clearing", the voice again is paired with the alto sax at the onset, then adds counterpoint during Ms. Au's solo.  Ms. Williams' voice rises out of the piano phrases on the final track, the 2-part "They Say We Are Not Here." The piece begins as a pretty ballad that Pentney eventually colors with various keyboards (acoustic piano, synth, and Rhodes).  The quartet plus voice builds to an intense close, there is approximately 30 seconds of silence, then the band reenters on a funky groove, not unlike "Aureole" in its intensity and swing (and blistering Hammond B-3 licks), an encore perhaps, an emotional release maybe, fun absolutely.

"Forest Grove" packs a lot of music into 58 minutes and the enthusiastic listener will discover much to savor throughout.  Whether it's the well-sculpted melodies, the active and complementary rhythm section, the various keyboard sounds, or the lyrical alto saxophone sound of Allison Au, give this music time to soak in - it's well worth the time.

For more information, go to www.allisonau.com.

Listen to the Ms. Au and the band talk about the recording: 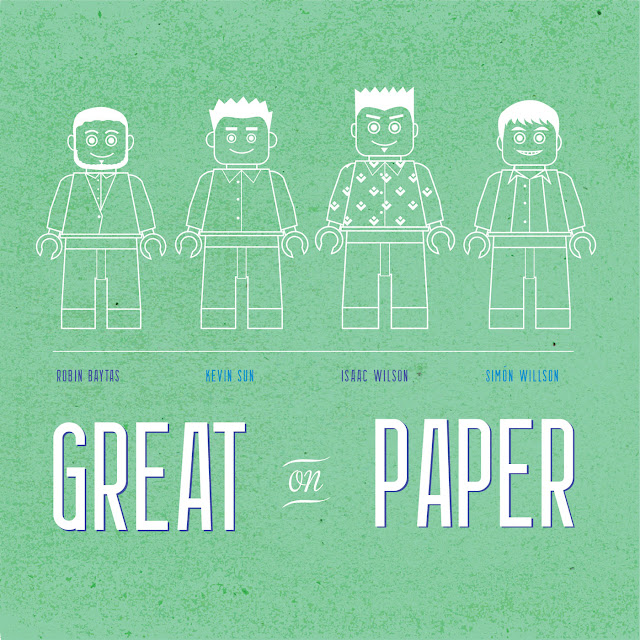 One has to admire the chutzpah/cheek of a musical ensemble that names itself Great On Paper.  The 4 musicians that make up the group - Robin Baytas (drums), Kevin Sun (tenor saxophone), Isaac Wilson (piano) and Simon Willson (acoustic bass) - seemingly have no fear. The musicians had met as students in 2011, became a working band in 2013, and recorded their self-titled debut album (issued on Endectomorph Records) in 6 hours at Sears Sound in NYC on March 7, 2015 (they rode the bus down from and back to Boston, MA. And, they got pianist/blogger/composer Ethan Iverson to write the liner notes (there was a previous connection). So.......do they live up to or down from their name?

Great On Paper is good music.  You can hear various influences throughout but in expects that on a debut.  What's fun to hear is that the chutzpah referred to above translates to "no fear" at any point of the 6-song, 37-minute program. One hears post-bop ramblings on "Slimy Toboggan" (there's an image), Kenny Wheeler-like airiness on "Winnings" (one of the joys of Wheeler's music is that it could sound airy even while going "out"), a bebop-inspired "Negative Bird" (influenced by Steve Coleman),and a lengthy swing outing on "I Hear A Rhapsody."  On the last track mentioned, the rhythm section is joyously rambunctious during the piano and tenor sax solos.  That allows both Wilson and Sun to explore melodic and rhythmic paths without losing their way.  Both Baytas and Willson get to solo, with the former dancing about on his high-hat and the latter showing his tuneful side.

Elsewhere, Sun transcribes a work by Olivier Messiaen, "O Sacrum Convivium", taking the original choral piece (from 1937) and giving each instrument its own role. It's a standout work.  The pianist composed "Torsion", which takes its forward motion from the wonderfully propulsive work of Baytas and the strong chordal feeds from Wilson.  His solo really goes in many directions, at times melodic then percussive and always interesting.

Plenty of promise in this program.  Give Great On Paper a chance and their music will grow on you.  I imagine they are a lot of fun to see and hear in person.  To find out more, go to www.endectomorph.com/great-on-paper.html.

Give a listen to the opener, "Winnings":