Vocalist/pianist Champian Fulton has a new album, "After Dark" (self-released), dedicated to the music of Dinah Washington (1924-1963). Ms. Washington, born Ruth Lee Jones, started out performing in her adopted hometown of Chicago in her late teens, worked with numerous musicians and made her first recordings in a group led by vibraphonist Lionel Hampton. She signed with Mercury Records in 1946 and began recording a string of hits that ranged from blues to jazz standards to adaptations of country songs and much more. She sang with many fine bands and big bands, from Cannonball Adderley to Count Basie to Duke Ellington.  Although there are still a number of albums and compilations available, you rarely hear Ms. Washington's music these days. 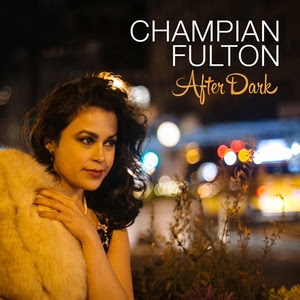 Along comes Ms. Fulton, the Oklahoma native who was born into a musical family (Dad is a trumpeter and educator).  In an email conversation, she writes " When I was about 5 years old, my father began to buy me CD's, which were still a bit new back in the early 90's, and the second CD he gave me was "Dinah: For Those in Love". He thought I would love Dinah's singing, but also Clark Terry was a very good family friend, and that made the recording even more precious. I became obsessed with that record. I only had a walkman, so we had to make a cassette so I could listen to it whenever I wanted. Pretty soon I learned every song and every solo. My father and Clark thought this was HILARIOUS and would make me sing bits of the record at parties. After all this, when I was about 8, I decided all I would listen to was Dinah. So everytime we went record shopping, that's all I bought and eventually I had most of her recordings. I spent most of my younger years with her, only listening to Billie Holiday, Sarah Vaughan, etc etc, once I was a teenager. To this day Dinah remains my touchstone and my constant companion and inspiration. Doing this project was a great deal of fun, for that reason. I selected the tunes from among my favorite Dinah recordings, some were big radio hits and some were only big hits to me."

The new album features bassist David Williams, drummer Lewis Nash and, on flugelhorn and trumpet, her father Stephen Fulton. If you've not heard the music of Dinah Washington or only know her from her 1959 mega-hit "What a Difference A Day Makes", this recording will be a real treat. That song is here but with a subtle Latin rhythm and no big string orchestra. You'll hear the influence of the vocalist on Ms. Fulton and that's fine - Ms. Holiday and Ms. Vaughan can be heard but this is no imitation. And, this recording also has quite a fine piano solo.  Dad turns up on "Ain't Misbehavin'", his muted trumpet work playing some fine blues lines.  On "A Bad case of the Blues", the elder Fulton channels Louis Armstrong (at times) but stays in the horn's middle register.  There's a great blues piano solo on "Baby Won't You Please Come Home" with Ms. Fulton ranging up an down the keys but always in her blues mode. Williams' thick tone on bass and Nash's splendid cymbal work also stand out. The program closes with "Midnight Stroll"; just piano on this reflective walk, the strong left hand keeping the bottom covered while the right hand tells the "story", telling the "truth" of why she's strolling alone.

Champian Fulton and band - Dad on flugelhorn Adi Meyerson on bass, and Ben Zweig on drums - will be this Friday February 19 at 9 p.m. in the 9th Note, now located at 15 Band Street in Stamford.  The venue moved from its original home in New Haven some months ago and has been great entertainment 4 - 5 times a week.  To reserve tickets and get directions, call 203-504-8828 or go to www.the9thnote.com.  To find out more about Ms. Fulton, go to www.champian.net.

Here, give a listen:

On Saturday night (2/20), the 9th Note welcomes guitarist Syberen Van Munster and his Quintet.  The Dutch guitarist and composer released his debut CD, "Plunge For Distance", last Marchand brings most of the musicians who participated on the sessions to the Stamford night club including Ben van Gelder (alto sax), Vitor Gonçalves (piano/accordion) and Rick Rosato (bass).  Joining them on drums will be Mark Ferber, one of the finer drummers on the NYC scene.

I have yet to hear the recording but below is a video of the title song which will give you an idea of the musical and emotional qualities in the guitarist's compositions. To find out more about his life and work, go to www.syberenvanmunster.com.  For ticket information, call the club at 203-504-8828.

The Side Door Jazz Club in Old Lyme has yet another impressive weekend of music planned for this week. On Friday night, Jan and Ken welcome baritone saxophonist Gary Smulyan with the fabulous rhythm section of bassist Ray Drummond and drummer Billy Drummond (no relation).  Smulyan, a native of Bethpage, NY, joined the Woody Herman Young Thundering Herd in 1978, a high-powered ensemble that also included saxophonist Joe Lovano and bassist Mark Johnson. He then went on to play with the Mel Lewis Jazz Orchestra as well as the Mingus Big Band and is now a mainstay in the Vanguard Jazz Orchestra.  He's also worked with dozens of pop and jazz stars plus has recorded 10 albums as a leader.  Smulyan is one of the baritone players who uses the full range of the big wind instrument and sounds great in every one of them

On Saturday, bassist Ben Wolfe returns to Old Lyme and he brings 2 of his favorite musicians and collaborators, pianist Orrin Evans and drummer Donald Edwards.  Both appeared on Wolfe's excellent 2015 PosiTone Records CD, "The Whisperer" (that session also featured the fine reed player Stacy Dillard) and have recorded several dates as a unit (including the one below).  Wolfe, who can swing with the best of them, also is a fine composer, writing tunes that bring out the best in the musicians who are featured.  He's worked with vocalists Harry Connick, Jr. and Diana Krall as well as with groups led by Wynton Marsalis, his brother Branford, pianist Marcus Roberts, and drummer Carl Allen.

Doors open at 7:30 p.m. and the Trio will begin at 8:30.  For more information, go to thesidedoorjazz.com or call the number above. To find out more about the bassist, go to www.benwolfe.com.

Here are Messrs. Wolfe, Edwards, and Evans playing the blues from Orrin Evans' "Flip The Script" CD on PosiTone Records: