Pianist Matthew Shipp strikes me as a man/musician who rarely looks back; it's not that he has no respect for the past (including his own) but that he's continually moving forward, looking for new pathways and new ways to express himself.

And, is he ever prolific!  "I've Been To Many Places" (Thirsty Ear) is the 3rd CD he's released as a leader in 2014 plus he's released a new duo CD with saxophonist Darius Jones as well as appearing on recordings with The Core Trio and the splendid new CD by drummer Jeff Cosgrove (reviewed here).

On March 31 of this year, Matthew Shipp sat down at the piano of Park West Studios in Brooklyn, NY with the concept of recording music he had played in group settings (duos, trios, quartets) updated as solo material.  He's often accused of playing music that is packed with dense chords and hypnotic rhythms (as if that was such as bad trait).  What stands out on the initial listens is just how melodic this program. The title track has the feel of an Appalachian folk tune interpreted by Elliot Carter while George Gershwin's "Summertime" is tender yet without any blues or gospel influences but with a carnival-like middle section. Later in the program is a lovely and generous reading of John Coltrane's "Naima" replete with fine rippling phrases and deep chords.  You may be surprised by the gentle reading of "Where Is The Love? (reprise)" - here, you hear gospel chords serving, perhaps, as a tribute to the late Donny Hathaway.  Boogie-woogie and stride piano make an appearance on "Blue Astral Bodies", the pianist digging deep and ending on a series of up notes. Shipp does not avoid the "darker"tones - "Cosmic Waves" features forceful chords, sustained low notes and, at times, the sonic equivalent of a lion stalking in his cage.  On the other side of the spectrum, "Reflex" is an emotionally rich and rewarding piece of music that draws one in with its flowing melody lines that end in slower reflective phrases.

Critics have long stopped comparing Matthew Shipp to Cecil Taylor and deservedly so.  Some of the music on "I've Been to Many Places" reminds this listener of the music Myra Melford has created as a solo pianist.  That's not to imply that Mr. Shipp sounds like Ms. Melford but that he has a similar approach. No matter the material, whether original or an older standard or jazz classic, Matthew Shipp sounds like himself.  For more information, go to matthewshipp.com. 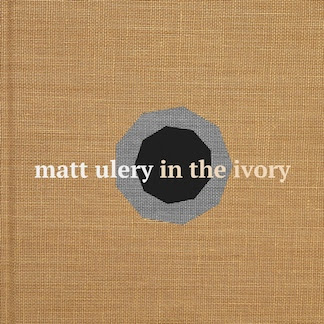 "In The Ivory" is his 6th CD as a leader and 3rd for Greenleaf Music and, in ways, a continuation of his debut for the label, "In  Little Light."  The recording clocks in at just under 80 minutes but wisely is split into 2 separate CDs, 7 tracks on each. The musicians playing and singing these songs include 4 long-time associates, drummer Jon Deitemyer, pianist Rob Clearfield, violinist Zach Brock and vocalist Grazyna Auguscik plus members of the chamber ensemble eighth blackbird including Dominic Johnson (viola), Nicholas Photinos (cello), Timothy Munro (alto flute), Michael Maccaferri (clarinets), Lisa Kaplan (piano), and Yvonne Lam (violin). Gregory Beyer, an important member of the recording ensemble, adds marimba, vibraphone, berimbau and maracas to the mix.  Other vocalists include Sarah Marie Young, Erik Hall, and Corbett Lunsford.

While bassist Ulery can be a very assertive member of the rhythm section in his smaller ensembles, for this music his most impressive contribution, besides the compositions, are the arrangements. The album opens with "Gave Proof", a swirl of strings, piano, flute, clarinet, vibraphone and it's not until 3 minutes into the piece that the rhythm section enters only to depart before the closing seconds for the "swirl" to reappear.  Ms. Auguscik voice rises above the strings on "There's A Reason And A Thousand Ways", a piece that so wonderfully combines elements of classical music and folk music, going through several sections and tempo changes, including a vocal duet with the bassist in the middle.  Sarah Marie Young, a Chicago-based singer/songwriter, makes her only appearance on "The Farm", her softer lilt and bigger range blending well with the cute and strings - the improv section that follows gives Clearfeld, Deitemyer and Ulery an opportunity to stretch out, even as the strings rise above the piano solo.

Intriguing musical juxtapositions abound on this recording. Whether it's the plucky (own intended) opening of "Innocent" that leads to a slower introspective melody or the appropriately named string feature "Longing" or the playful string arrangement behind Ulery's forceful solo on "Sweet Bitter", this music offers the eager listener the opportunity to really pay attention.

I suppose some people could treat "In The Ivory" as background music but one gets so much more satisfaction when immersed in the performances. Then, you can hear the blend of marimba, strings and piano on a particularly bright section of "Seeker" and how "Resilin" develops from the opening circular melody played by piano and marimba.  This is music to revel in, to bathe your mind and soul, to meditate on and to return to, an oasis in an ever-maddening world. Don't waste time comparing this to "In a Little Light", his other "large ensemble" recording.  Enjoy them both.  Matt Ulery continues to mature as a composer, arranger and musician - he's a major talent and a singular voice.  For more information, go to mattulery.com.

Here's a taste of this fine music: