BOLT Out of Boston in New Haven 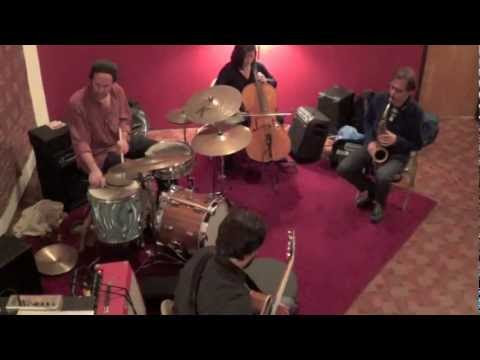 The Uncertainty Music Series continues its monthly series of concerts on Saturday September 13 with a special quartet from Boston.  BOLT - Eric Hofbauer (guitar), Eric Rosenthal (drums), Jorritt Djisktra (alto saxophone, lyricon) and Junko Fujiwara (cello) - has been an improvisational unit since 2011.  The group's debut CD, "Shuffle", was issued this summer on the Boston-based, musician-owned Driff Records, and is a 19-track compilation taken from a 2013 recording session. It's made to played in "Shuffle" mode as there is no overarching theme other than the tracks are totally improvised.  Playful, noisy, quiet and "free", the music displays myriad influences yet sounds like nothing you have really heard before.  The blend of Hofbauer's slide with Fujiwara's groaning cello, Djisktra's "warbling" lyric on (it's an analog wind synthesizer) and Rosenthal's raucous drumming on "Blaze" is a delightful mash of sounds.

The concert takes place at 8 p.m. in Never Ending Books, 810 State Street in New Haven. Opening the show will be series curator Carl Testa creating a set of solo electronics.  For more information about the show, go to uncertaintymusic.com. To learn more about BOLT, go to erichofbauer.com/2014/07/bolts-shuffle-cd-is-out-now-on-driff-records/.