I recommend that, before you listen to "Corduroy" (Little Sky Records), the 3rd CD from guitarist/composer David Ullmann, you go to his website - davidullmann.com/video/ - and check out the video in which and members of his David Ullmann 8 speak about the making of the CD.  You'll meet drummer Vinnie Sperrazza, vibraphonist Chris Dingman (both of whom played on his previous album "Falling") plus saxophonist Loren Stillman, clarinetist Mike McGinnis, and cornetist Kirk Knuffke (trombonist Brian Drye and bassist Gary Wang - who also played on "Falling" - round out the octet.) And, you will meet Mr. Ullmann who smiles a lot while talking about his band.

That genial attitude permeates the music on "Corduroy", songs which the composer says were influenced by TV show theme songs from the 1970s (such as "M.A.S.H." and "Taxi").  This music is filled with singable melodies; just try to listen to the title track without wanting to hum along. Sperrazza's fine cymbal work lights up the proceedings on "Ocelot", especially during the fine solos by Drye and McGinnis (both of whom play in The 4 Bags) - the "bang" of the snare drum also stands out when it leads the charge into Knuffke's solo. There's just a hint of Steely Dan in the opening section of "Something You Said" and wonderful West Coast bop turn on "Papaya." Both tracks feature exemplary guitar playing, the former for its quietly rippling single-note runs while Ullmann's rhythm playing shines on the latter (Dingman's vibes solo really impresses as does Stillman's strong alto work and, of course, Knuffke contributes another fine solo.) The soulful ballad  "You Can't Go Back" is a well-constructed composition, with a sweet melody, fine harmonies and short solos from the leader, Knuffke and Wang.  Still, it's the emotional quality of the song that will resonate long after you finish listening.

The closing track, the aptly titled "Moving On", is also a strong ballad.  The piece seems influenced by Wayne Horvitz, especially the voicings of the reeds and brass.  The melody moves around the front line before Drye and Stillman play solo lines that weave around each other. Following that, the guitar, bass clarinet and cornet follow the same format until their lines merge and the opening melody returns.  It's one of the prettiest pieces you'll hear this year (and, perhaps, for a long time to come).

"Corduroy" is comfortable music, great to get lost in (the passionate playing of Vinnie Sperrazza immediately catches your ear with the melodies a close second).  Every musician in the David Ullmann 8 is involved in the success of this music.  The music seems to float effortlessly from the speakers, with the perfect balance of fire and calm, solos and ensemble playing.  One can understand why David Ullmann smiles so much in the video - you will as well.  For more information, go to davidullmann.com. 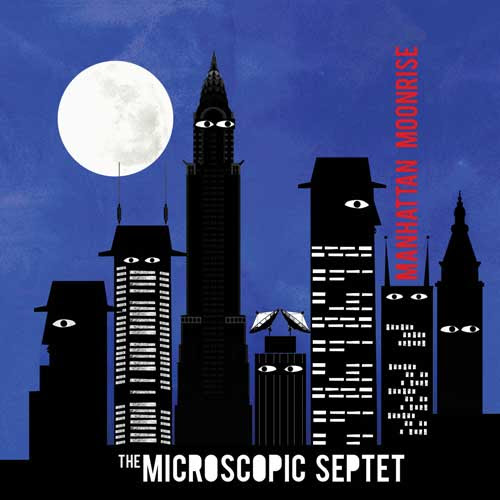 Pianist Joel Forrester and soprano saxophonist Phillip Johnston started The Microscopic Septet in 1980 as a vehicle for a saxophone quartet with rhythm section.  For 13 years (through 1992), they toured and recorded, playing the often quirky tunes of its founders, songs that sound as if there was a juke joint in New York City where the proprietor locked Duke Ellington, Sun Ra, "Fats" Waller and Julius Hemphill into a room and they came with a splendid hybrid.  The band's hiatus ended in 2006 and "Manhattan Moonrise" (Cuneiform Records) is the 3rd installment in their comeback. Amazingly, there have only been 2 changes in membership since the band started;  Forrester and Johnston recruited the rhythm section of Dave Hofstra (bass) and Richard Dworkin (drums) as well as baritone saxophonist Dave Sewelson with alto saxophonist Don Davis replacing John Zorn (really) in 1981 and tenor saxophonist Mike Hashim joining when the band reformed 8 years ago.

As for the music, there's plenty of variety in the 12 song, 61 minute program.  Johnston's sprightly "When You Get in Over Your Head" starts the program with the composer's shifting tempos and stop-on-a-dime changes. He also contributed the super funky "Obeying the Chemicals" that sounds like tune from The Band with an Allan Toussaint horn arrangement with an Albert Ammons-flavored piano solo.  The subject is swing on Johnston's "Let's Coolerate One", a jumping jive with a hearty walking bass underneath a fine baritone sax solo followed by a boppish tenor spotlight and a sweet piano solo. His final contribution is "You Got That Right!", a "jump blues" powered by splashing cymbals and thick toned bass lines.

The other 8 compositions belong to Forrester;  they range from the subtle "pop" sounds of "No Time" to the bouncing title track, with sections influenced by Thelonious Monk and Artie Shaw.  Much more Monk in the slow blues of "A Snapshot Of the Soul" but the horn lines favor Coleman Hawkins. More blues, this time with an Ellingtonian feel, on "Star Turn" while there's a touch of gospel and r'n'b in the bouncy "Hang It On a Line" (the playful melody line and accompanying harmonies are mighty attractive as well.) Dworkin's fat-back drums and Hofstra's buoyant bass lines keep the piece jumping. Smart bow to "Hey Joe" during the baritone solo. The lovely unaccompanied piano solo at the onset of "Blue" does not prepare one for the musical chaos that follows, although the band does teeter on the brink of sanity every now and then.  Is that a hint of Bach or Rachmaninoff in the melody line before the band breaks into a New Orleans groove on the final track, "Occupy Your Life"? Whatever it is, the tune has a snaky groove that dances beneath the solos.  The composer delivers a heartfelt vocal near the close of the tune, reminding the listener to take control of their destiny.

Thee is something about the gentle anarchy of The Microscopic Septet that does good for one's soul.   The band can swing, rock, glide, bounce and keep you guessing from one minute to the next.  Their brand of musical joy never sounds stale - "Manhattan Moonrise" is good music that sounds better with each successive listen.  For more information, go to www.microscopicseptet.com.

Here's a taste of the title track: 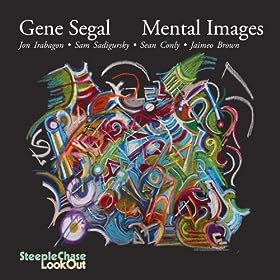 Segal, Conly and Jaimeo Brown conjure up James Brown on the super-bad funky opening track,
"Healing Feeling."  The deep groove (replete with "wah-wah" guitar comping) supports Irabagon's blazing solo.  The leader steps out for his own "fuzzed-up" statement while Sadigursky (on tenor) draws down the intensity level at the start of his solo only to build it back up (with the drummer mightily pushing him on.) The proceedings take a turn for the Platonic on "Allegory of the Cave", a ballad with an Eastern European feel (and the occasional waltz tempo). Sadigursky's woody bass clarinet tones move the band into "Minds Eye", a ballad with great intensity.  The clarinet solo twists and turns on the power of Brown's rapid-fire drumming and then joins with the bass and guitar to support a strong drum spotlight.

There's a playful and "free" feel to "Irrational Drives" as well as another intense alto solo while "The Bearded Lady" feels a flowing soprano sax solo from Sadigursky and more powerful drumming. Perhaps my favorite track is the mysterious "Trapeze Act", with its "film noir" feel and splendid clarinet work. In fact, Sadigursky dominates the first 2/3rds of the piece yet Segal's "rock-ish" solo stands out as well.

By the time you reach the "avant-blues" of the last track "Elephants", you realize that no 2 tracks sound the same and that Jaimeo Brown can be a game changer with his powerful drum work.  Gene Segal is no slouch on his instrument not only when he is guiding the band through the pieces with his strong chordal support but also when he takes the spotlight.  His background work often suggests the influences of both Bill Frisell and former teacher John Abercrombie but Segal is very much his own man.  "Hypnotic" was quite good but "Mental Images" is a giant step forward.  For more information, go to www.genesegal.com.
Posted by Richard B. Kamins at 10:39 PM