The Michael Musillami Trio - Musillami (guitar) with the irrepressible rhythm section of Joe Fonda (bass) and George Schuller (drums) - has been together for over 10 years during which time they have released 7 CDs for the leader's Playscape Recordings.  No. 7 is titled "Pride" and is a 2-CD set comprised of 2 sessions recorded in New Haven CT's remarkable Firehouse 12 Studios.  Both disks feature guests with the Trio, the first from late November of 2013 adding pianist Kris Davis and tenor saxophonist Jimmy Greene (on 2 tracks).  Disk 2 was recorded in concert (the space serves as both recording studio and performance space) on October 10, 2007 and features violinist Mark Feldman. 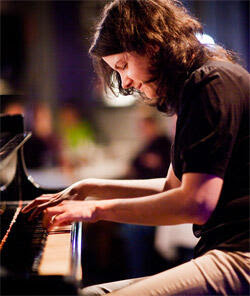 Musillami has recorded with pianists before, most notably the mercuric Peter Madsen and melodic Ted Rosenthal.  Ms. Davis (pictured left), whom the guitarist met in an Artists Showcase in January 2013, brings a different dynamic from the pianists mentioned above.  She's rarely demonstrative, often understated, yet can play with such grace, as she displays on "Old Tea."  Her angular lines both work against and with the active rhythm section on "Mountain Pride" and serve as a smart counterpoint for the often rapid-fire phrases of the leader.  The head to "Uncle Fino's Garden" is a swinging, even boppish, jaunt that evokes Thelonious Monk. Ms. Davis's gentle comping behind the guitar during the solo sets the stage for her impressionistic solo, one that starts out rubato (with smart counterpoint from Fonda and forceful interjections from Schuller) and goes through numerous shifts in tempo and intensity. Her subtle blues riffs on "Bald Yet Hip" (also Monk-like at times) set the pace for the leader's long solo, which in turn, opens up the floor for Greene to come in soft and low before building a head of steam.  There's a funky feel to "Courageous David B." and Greene rides the evolving waves of support from Fonda and Schuller.

The disk closes with "Wild Things Music", 4 songs from a suite Musillami composed to accompany a reading of Maurice Sendak's 'Where the Wild Things Are." Like the book and the drawings that inspired it, the moods of the music range from dark and foreboding to playful and downright rowdy. Ms. Davis is an integral part of the music from the opening seconds to the last tones, seamlessly matching her intensity to the Trio's exuberance.

Disk 2 comes from a CD-release gig that the MMT with Mark Feldman (pictured left) played at the Firehouse 5 months after recording the CD/DVD set "The Treatment." This 4-song set includes 1 song ("Human Conditions" from the earlier release (it appears on both the studio and live recording that make up that package), 2 early Musillami songs re-arranged for this quartet, and the title track from the Trio's 2003 debut CD, "Beijing."

"Swedish Fish" opens the set, a high-energy piece that excites not only the crowd but the band. Once the 4 musicians leave the "theme" section, the music exploded with feisty solos and great rhythm section work. "Human Conditions"  features a melody picked and plucked by the guitarist and violinist plus playful movement in and out of solos.  Schuller's subtly forceful drumming underpins Feldman's expansive solo then drops out as Musillami and Fonda execute a nifty dialogue filled with counterpoint and call-and-response.  The 20-minute "Beijing" is a multi-sectioned tour-de-force that starts softly but picks up in excitement as the 4 musicians move into the body of the piece. Everyone but Schuller solos in the first 11 minutes then the guitarist returns to solo over a "straight-ahead" rhythm. After that solo reaches its climax, everyone drops out for the drummer who, at first, quietly with hand percussion, then with growing intensity, delivers a rhythmic and melodic solo dropping back down to a whisper before the guitarist returns to the opening theme.  Overall, the performance is dramatic and emotionally satisfying.

"Pride" is powerful music played by musicians who have no fear of the unknown and great trust in each other.  The music that Michael Musillami composes for these various combinations is written knowing the strengths of his partners and their intuitive natures.  Messrs. Fonda and Schuller are adventurous, supportive, and playful throughout the program - the listener should pay special attention to how they interact and support the soloists and the composed material. The guests are not afterthoughts or add-ons but full participants in the adventure.  For more information, go to www.michaelmusillami.com. 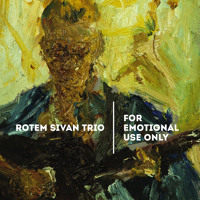 Rotem Sivan is a young guitarist/composer who moved to the United States from his native Israel in 2008 to study at the New School in New York City.  "For Emotional Use Only" (Fresh Sound New Talent) is his 2nd recording and the first to feature his working group of Haggai Cohen Milo (bass) and Mark McLean (drums). It's fascinating that the first song you hear on the CD - "Intro to Spirals" - is a bass solo but, after you listen several times, you understand that the leader cares more about the compositions than displaying his formidable chops.  Yet, Sivan can surely play. "Sefi's Blues" shows he can "blaze" with the best, that bassist Milo has great dexterity and that McLean can swing quietly or very much out loud. The melody line of "Spirals" may remind you a country song until the bridge while the title track is a stunning ballad built upon a handsome bass line.  "Pass It On" has a sly melody line that picks up speed as if the guitar and bass were falling downstairs.  The guitar solo starts off as if the Trio was playing hide-and-seek but soon hits on a groove that allows the guitarist to show a bluesier side.  There's a strong sense of "play" as the 3 shift tempos at will, speeding up to a breathtaking pace.

Sivan composed 8 of the 10 tracks, the exceptions being the expansive reading of "A Dream Is a Wish Your Heart Makes" (from Disney's "Cinderella") - one hears the influence of the late Jim Hall in the rippling horn-like phrases of the guitar solo (not to mention the various song quotes Sivan throws in). Tom Jobim's "Useless Landscape" shows that the group can move in-and-out of tempo without losing its forward motion and also play an intense piece without raising the volume.

"For Emotional Use Only" ought to introduce guitarist Rotem Sivan to a larger audience (his previous release is on SteepleChase). The program is a delight from start-to-finish, the musicianship top-notch and the execution delightful.  You can listen late at night without waking anyone in the house (but not in the car with the windows open.)  More, please!  For more information, go to www.rotemsivan.com.

For his first release as a leader since 2007's "Invocation", guitarist and composer Paul Bollenback brought bassist Joseph Lepore (Melissa Aldana, Shauli Einav) and drummer Rogerio Boccato (John Pattitucci, Kenny Garrett) into the studios for 2 days in October 2013.  The ensemble's work resulted in "Portraits In Space and Time" (Mayimba Jazz), nearly 80 minutes of fine melodies, hearty improvisations and, best of all, wonderful give-and-take.  Set up in the manner of a trio gig, the 14-tune program includes several short group improvisations that serve both as an introduction to the program as well as transitions to new songs.

Perhaps the best way to enjoy this music is to start at the beginning and let it go. It will take the interested listener 2 or 3 times through program to tell the tunes apart. There are traces of John Abercrombie in the sound and melody phrases of "Homecoming" and isn't that the opening riff of Miles's "Milestones" that shows up now and then.   The second transition piece, "Collective", introduces the acoustic guitar into the set plus sets the stage for Bollenback's lovely ballad "Sunset" - he articulates his notes with such grace on this track and the more up-tempo (and Brazilian sounding) "Little Island" that these tracks really stand out. The subtle rhythms and sway of "Dance of Hands" and the quiet yet emotional strength of "Dance Delicious" display a gentleness , 2 more acoustic guitar tracks with song melodic content and intuitive interplay. The trio never substitutes technique for content, endless riffs for melody and it's important to mention that the rhythm section is not there just to support the guitarist but to interact, to give him ideas and to push him in new directions.

By the time one reaches the final track, the blues-soaked "Swingin' At Capones", I can't imagine one not being satisfied with these "Portraits."  Paul Bollenback can and does play with great gusto but a good percentage of this recording shows off a well-developed sense of melody.  Kudos to Joseph Lepore and Rogerio Boccato for their stellar contributions. For more information, go to www.paulbollenback.com.
Posted by Richard B. Kamins at 7:42 AM