The Hits Keep on Coming (Pt 1); The Connecticut Edition

Bassist/composer Mario Pavone continues to go from strength to strength.  As I write this, the Waterbury Connecticut native is halfway to his next birthday (he turns 74 in November) and plays with the fire of musicians 1/2 his age.  His new Playscape recording, "Street Songs", is another chapter in Pavone's musical autobiography.  Inspired by the music he heard in the neighborhood in which he grew up, the composer uses the accordion of Adam Matlock to hearken back to those days. Yet, Pavone is no nostalgia merchant so this music looks forward as much as it reflects the bassist's work with Bill Dixon, Anthony Braxton and Thomas Chapin.  Long-time associates Peter Madsen (piano) and Steve Johns (drums) are on hand as is trumpeter/flugelhorn player Dave Ballou (who has worked with Pavone numerous times over the past 5 years.  A pleasing surprise is the addition of a second bassist - Carl Testa, who runs the Uncertainty Music series in New Haven, CT, as well serving as the house manager for the Firehouse 12 Spring and Fall Concert series, is well-known in the area for his cutting edge bass and electronics work.  Whereas  Pavone has a fatter but percussive style in his playing, Testa has a crisper tone and contributes most of the arco (bowed) bass parts.

"Elkna" opens the program with a short phrase played on accordion and the 2 basses answering back. As the rest of the band enters, the music takes on a decidedly funky swing note.  Madsen takes a rollicking solo that leads into Matlock's energetic turn  The 2 basses share a solo section, trading "4's" with the rest of the group.  "Streetsong" turns on a circular phrase reminiscent of a Thomas Chapin tune, a snaky line that stops-and-starts and features strong solos from accordion, trumpet and piano (listen to Johns' excellent support beneath Madseen's solo.)

Other highlights include "Alban Berg", a piece that Pavone recorded with his Arc Trio on its 2013 recording. Here on this quartet version (no accordion or second bass),  the descending piano lines behind the trumpet solo suggest Herbie Hancock as the rhythm section kicks up a storm.  The "swing" feel of "Cobalt Stories" (also a quartet piece) serves as a counterpoint to the squalling trumpet and pointillistic piano work.  "The Dom" displays yet another one of Pavone's strengths; he builds his composition up and out from the bass and drums (it's no surprise that the drummer also states part of the main theme.  There's a sly cat-and-mouse feel to the intriguing "Mythos", with the bassists and drummer dancing together under the accordion solo - then, the piece turns Monk-like for the interactions of the piano and trumpet.

"Street Songs" is playful, filled with lively musicianship, strong melodies and many fine solos.  Mario Pavone, as both a player and composer, never sells his audience short; instead, he creates stimulating music that is fresh, forceful and filled with life.  Also, it's always a pleasure to hear Peter Madsen who, like the leader, plays with gleeful abandon as well as displaying a zest for melodic inventions.  For more information, go to www.mariopavone.com.

Mario Pavone, in association with Jazz Haven, will present "Street Songs: the Accordion Project" on Wednesday July 16 at Cafe Nine, 250 State Street in New Haven. The group will include Matlock, Testa, Johns and Dave Ballou with Matt Mitchell in the piano chair.  Trumpeter Ballou will lead a Brass Quartet that his wife Leise (French Horn), Peter McEachern (trombone) and Gary Buttery (tuba). The group will also play the Litchfield Jazz Festival in August.  For more info about the New Haven gig, go to www.cafenine.com. For more information about the August date and to purchase tickets, click on the following link, litchfieldjazzfest.com. 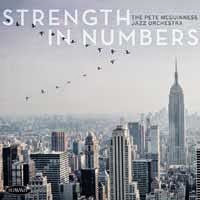 Trombonist Pete McGuinness, a native of West Hartford, CT, is a graduate of the jazz programs at Hall High School, University of Miami, and Manhattan School of Music. He's also a fine vocalist having sung in various groups including Bill Mobley's Smoke Big Band.  His previous release, "Voice Like a Horn" (Summit Records), found him leading a quartet and singing through a program of (mostly) standards.  (It should also be noted that McGuinness was chosen for the semi-finals of the 1994 Thelonious Monk Vocal Competition losing to Sara Lazarus).

"Strength in Numbers" (Summit Records) is the 2nd release to feature the Pete McGuinness Jazz Orchestra, featuring him fronting a 16-piece ensemble of New York City-based musicians. The trombonist worked with Bob Brookmeyer and Manny Albam in the BMI Jazz Composers Workshop and it shows throughout the program.  The opening track, "The Send-off" is, in fact, dedicated to Brookmeyer and you can hear his influence in the the melody line, the section writing, the voicings, and how McGuinness uses the drums of Scott Neumann to help state the theme. That influence is also evident in the lovely ballads "What Are You Doing the Rest of Your Life" and "You Don't Know What Love Is." The former features a long opening in which the various sections plus pianist Mike Holober share the thematic material before McGuinness with his airy tenor voice (the blend of flutes and bass clarinet in support of his voice is a classy touch.)  The latter track opens with a 2-note piano figure, a little bass riff and atmospheric brass and reeds before the leader comes in with a short scat intro to the first verse (fascinating minor figure played by the trombones behind him).  The arrangement calls for the sections to augment the vocal and serve as counterpoint. Bruce Eidem delivers a bluesy 'bone solo before McGuinness scats several verses, imitating the section writing from earlier in the song.

"The Swagger" is a modal blues swings atop Neumann's active cymbal and snare work. The solos include a hot strut from Dave Riekenburg (baritone saxophone), a genial and jaunty delivery from Jeff Nelson (bass trombone) plus a blues-soaked trip that rises high from Marc Phaneuf (alto saxophone. "Spellbound" rides in on what the leader dubs "a mixed meter Latin cha-cha style" (more sparkling cymbal work) sounding more sultry than burning, although Jason Rigby shows plenty of fire in his tenor saxophone spotlight while the muted trumpet solo of Chris Rogers jumps out of the section work with aplomb. Swing is king on "Nasty Blues", a "pedal to the metal" style of drive in the rhythm section (the bass work of Andy Eulau is impressive throughout) supporting solos from Holober, Dave Pietro (alto saxophone), Bill Mobley (trumpet) and Mark Patterson trading choruses with fellow trombonist Matt Haviland.

McGuinness has great fun re-arranging the Stephen Foster classic "Beautiful Dreamer", with moments in the opening section that suggest Maurice Ravel's "Bolero." There is a strong soprano ax solo from Pietro that slows down into an unaccompanied piano solo from Holober (leader of the Westchester Jazz Orchestra that commissioned the piece).  His partners in the rhythm section bring him back into the piece and a reiteration of the opening theme. But, there's one more surprise as Pietro and Holober play a short duo based on the composer's original arrangement.

If you like the work of Bob Brookmeyer, Gil Evans, Maria Schneider and others, "Strength in Numbers" will fill your heart and ears with rapture.  The music is smart, the arrangements fresh, the section work exemplary, the solos often bright and the leader's vocals an added attraction.  Pete McGuinness gets this music right, constructing a frame for 16 musicians to do their best work - and they do!  For more information, go to www.petemcguinness.com.
Posted by Richard B. Kamins at 9:49 PM