There is music for every mood, from the depths of depression to the heights of exhilaration. Morning music, beach music, bedtime music, music for love, for loving, for holding a newborn or putting a 2-year old to bed.

A Jazz Orchestra has the ability, under the proper creative hand, to create myriad worlds and satisfy many moods.  Christine Jensen, a native of Sechelt, British Columbia, raised in Nanaimo on Vancouver Island B.C, moved to Montreal, Quebec, to study at McGill where she earned both her undergraduate (1994) and graduate degrees (2006), working in groups as a saxophonist (alto, soprano) with her sister Ingrid (trumpet), pianist Geoffrey Keezer, saxophonist Donny McCaslin and others.  As a leader, she released 3 smaller group recordings as well as co-leading Nordic Connect, a quintet with Swedish pianist Lena Olin.

In 2010, she released her first CD with the 18 member Christine Jensen Jazz Orchestra.  "Treelines" (Justin Time) is a tribute to her native land and the forests. The music displays the influences of Bob Brookmeyer, Gil Evans and, certainly, Maria Schneider (with whom she shares a trumpeter.)  Like the late Brookmeyer and Ms. Schneider, Ms. Jensen's compositions are not simply vehicles for long solos but stories with intricate arrangements, with solos that come logically or organically from the melodic strains in the works. She most certainly writes for the musicians in her band (most, if not all, Canadian citizens), creating pieces for their individual voices.  But, it's the great writing for the sections that often catch your ear on first listen.

Now, there is "Habitat" (Justin Time) which, like its predecessor, has won the Canadian JUNO Award for "Best Contemporary Jazz Album of the Year" (the CD was released in her native land in October of 2013). If you enjoy Big Band music, there is much here to merit your full attention.  Again, like Ms. Schneider, Christine Jensen writes pieces based on personal experiences.  The opening track, "Treelines", is a work commissioned for the University of Nebraska/Lincoln jazz orchestra with the condition the work carry the title of her previous CD.  "Tumbledown" was inspired by trips to Haiti before the devastating earthquake (the main theme composed in reaction to the event) whereas "Blue Yonder" features an Afro-Peruvian rhythm she discovered while on tour in South America.  The stately brass and reeds fanfare that opens the piece has an Aaron Copland feel but, once the rhythm section, the "feel" changes and the music charges forward.

The longest track, "Nishiyuu", is a musical tribute to the 6 Cree youth who walked 1500 kilometers from their home on Hudson Bay in northern Quebec to the Canadian capital, Ottawa (read about the journey here). The composition features the Orchestra in the role of the youth and tenor Chet Doxas as their guide. Even if you not know the story, this is powerful music, intense without being loud, never strident but also not soft or unfocused.  Doxas, whose next venture is a Greenleaf release with Dave Douglas, Steve Swallow and his drummer brother Jim, a tribute to Jimmy Giuffre, does a stellar  job, one of the finest tenor solos of the past few years.

Sister Ingrid, who appears on 4 of the 6 cuts, gets the lead on 2 including the afore-mentioned "Treelines" and on the closing track, "Sweet Adelphi."  Her fiery spotlight on the latter track comes after the expansive soprano sax solo performed by Christine.  The focus is on the different sections for several minutes before the lovely soprano/trumpet interaction that carries the piece and the CD to its close.

One of the more impressive aspects of "Habitat" is the music does not sound studied, stilted or overly derivative.   Instead, Christine Jensen has composed, orchestrated and coordinated a recording whose music moves inside on the first listen, going deeper into your heart and mind the more you listen.  For more information (and the entire cast of characters), go to www.christinejensenmusic.com. 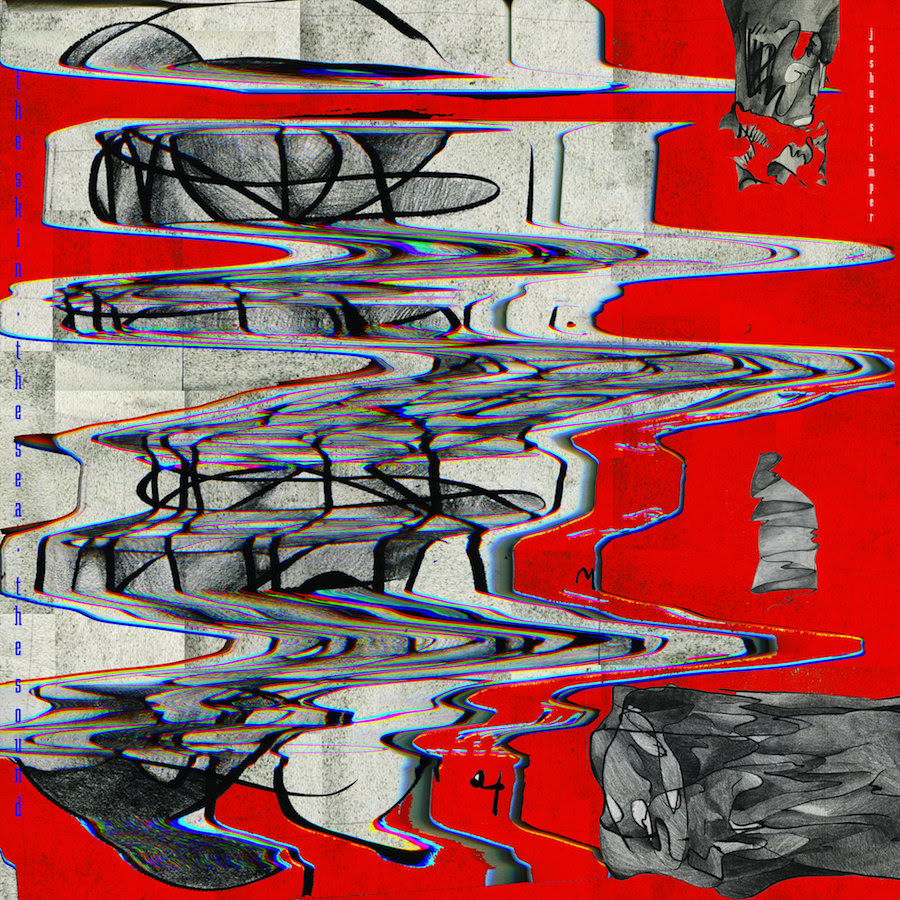 Hard to believe it's been nearly 3 years since guitarist/ composer/ vocalist Joshua Stamper issued "Interstitials", a splendid recording filled with memorable songs and fascinating arrangements for guitars, reeds and low brass.  He's back with "the skin, the sea, the sound" (Good Behavior), employing the 2 reed players (Mike Cemprola and Jon Rees) and the low brass man (Paul Arbogast); this time around, he's added drummer Thomas Bendel, the electronics of Emil Nikolaisen, and the voice of Ruth Naomi Floyd (on one track). Stamper's music still sounds influenced by Andy Partridge and Colin Moulding of XTC as well as Robert Wyatt; yet I remain so impressed by his use of the reeds and brass. At times, his lyrics sound like e.e. cummings. For example, "Peel Past The Starry Scrim" is a combination of natural, religious and and surrealistic images in the words (see below).  Add the electronic noise that leads to the airy flutes, the chiming guitars, the soft overdubbed vocals, the low brass and the military-like drumming and you have music that transforms your day.  The bass trombone shadowing the vocal lines on "etching sticks click ice brick thick" (say that quickly 5 times) should make you smile and there's a hint of Charles Ives in the flute support.  As the song moves away from the vocals, the intensity picks up as the saxophone, clarinet and trombone dance around each other, sometimes in unison or harmony.  It's this wondrous polyphony that borders on "dixieland folk" music. There is a hint of Nino Rota (who scored the films of Federico Fellini) in the circus music opening of "A Better TelescopE" but the music soon goes in several new directions. A simple guitar melody opens the album's longest track (9:17) "I'd Like To Be Like You" - that's the opening line of the vocal which soon introduces the reeds and brass playing counterpoint.  An alto saxophone moves out of the ensemble to push the piece forward with brass moving beneath; suddenly, a soprano saxophone rises above everyone before the vocalist returns repeating the title as the piece comes to an abrupt end.   The program closes with "The Silent Beach, the Bowl of Stars", an instrumental with the reeds rising up through the hazy guitar sounds.

The music Joshua Stamper creates moves in its own world, one which has myriad influences yet sounds quite original.  "the skin, the sea, the sound" is a wonderful aural environment where one can lose him-or-herself and do so with pleasure. Don't waste your time putting a label on this album - really, just let yourself move into the songs and simply be.  For more information and purchase options, go to   joshuastamper.bandcamp.com.

(Lyrics courtesy of Joshua Stamper)
Posted by Richard B. Kamins at 11:00 PM