A Flurry of Recommendations (Part 1) 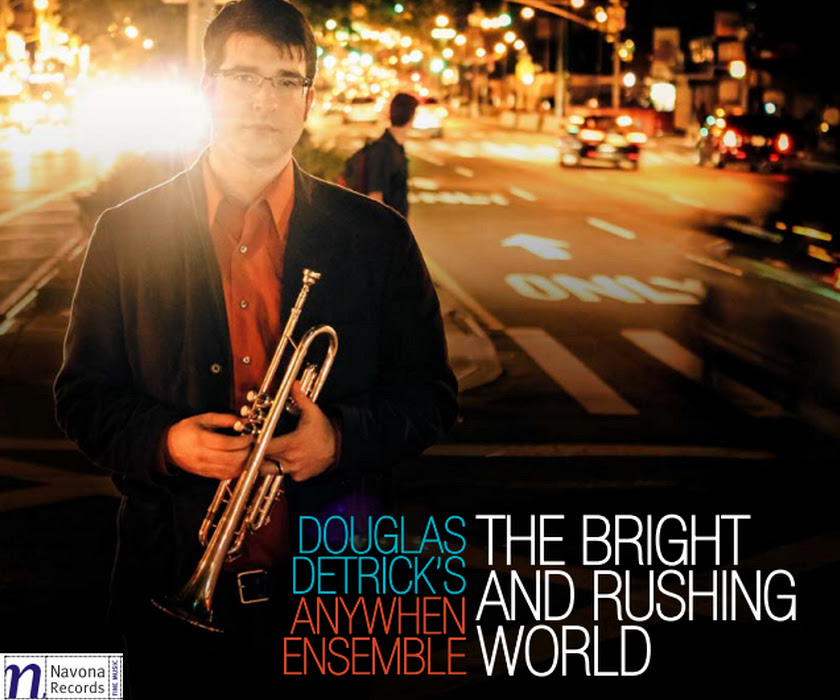 Up until this CD arrived, I had not heard or heard of Douglas Detrick; all this time while I have been blithely innocent of his existence, he's been creating a fascinating repertoire. The New Jersey native, raised in Wisconsin, is now based in Portland, Oregon, where he earned his Master's of Music from the University of Oregon/Eugene.  He leads several different ensembles, including the AnyWhen Ensemble whose 3rd CD, "The Bright and Rushing World" (Navona Records), has just been issued.

The Ensemble - Detrick (trumpet, composition), Hashem Assaduhali (alto and soprano saxophone), Shirley Hunt (cello), Steve Vacchi (bassoon), and Ryan Biesack (drumset) - came to Firehouse 12 Studios in New Haven, C, to record the program, a 10-movement suite commissioned by Chamber Music America that is quite impressive in its blend of sounds and styles.  One could easily dub this music "chamber jazz" but that's too stifling.  The music has echoes of the Art Ensemble of Chicago, of Henry Threadgill, Marty Ehrlich, Aaron Copland and especially Muhal Richard Abrams.  The blend of the sharp brass phrases with Assaduhali's sweet soprano or angular alto saxophones plus the deep tones of the bassoon with the splendid brush work of Biesack may also remind you of the group Oregon.  Add to that, Ms. Hunt's deep cello lines and occasional pizzicato, and this music moves in unexpected ways.

The songs takes their titles from a 10-line poem Detrick wrote after he finished composing the music. The poem tells of the composer's work which, once loosed "Into the Bright and Rushing World", is forever changed and changing.  Best to immerse yourself in this music, enjoy the clear sounds, the way the pieces are often multi-sectioned, and how the parts are ever-shifting but returning to a peaceful center.  For more information, go to anywhenensemble.com.
Posted by Richard B. Kamins at 8:12 PM