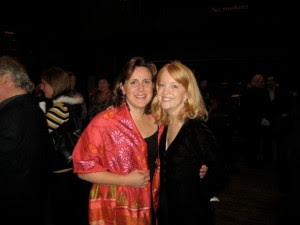 Several years ago, I read that soprano Dawn Upshaw has commissioned composer/band leader Maria Schneider to write new pieces for her.  The 2 suites, "Winter Morning Walks" and "Carlos Drummond de Andrade Stories", are written for voice and chamber orchestra with the first work also featuring bassist Jay Anderson, pianist Frank Kimbrough and Scott Robinson (alto clarinet, bass clarinet.) The works were debuted in 2008 and, in 2011, Ms. Schneider launched an ArtistShare campaign to commit the pieces to record. 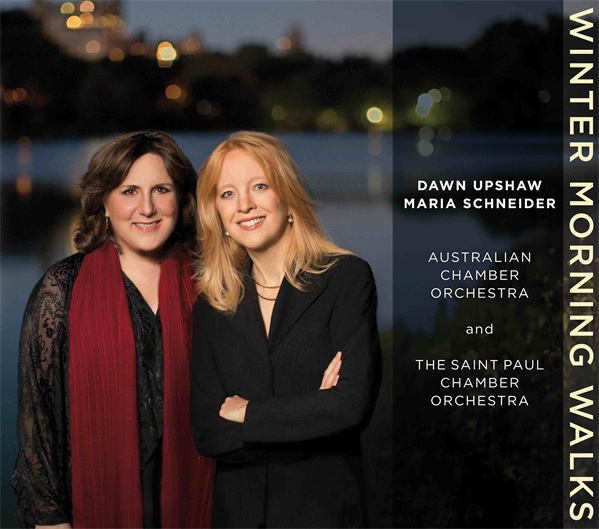 For those who participated in the campaign, the recording, also titled "Winter Morning Walks", arrived this week.  If you are familiar with the music Ms Schneider creates for her orchestra, this is quite a different experience. Not just because this music for voice or that the majority of the musicians come from either the Australian Chamber Orchestra or the Saint Paul Chamber Orchestra; no, the 14 tracks are fairly compact (only 2 clock in at over 6 minutes and there are 2 under 2 minutes.)  The title suite features 9 poems from Ted Kooser (born 1939 in Ames, Iowa, he now lives in Nebraska) written in 1998-99 as the poet was recovering from cancer surgery and the subsequent radiation treatments.  The poems Ms.Schneider selected do not deal with illness or recovery but with living and love.  The 4 poems that make up the second suite come from the Brazilian poet Carlos Drummond de Andrade (1902-87) - there is also a "Prologue" on which Ms. Upshaw supplies the wordless vocal.  The vocalist, whose career has been put on hold twice in the last 7 years as she, too, recovered from cancer surgery, is in wonderful voice throughout.

This is a not a review but I felt the need to write about the recording in the aftermath of having to cancel classes today as our state was hit with 12 inches of snow.  I found the time to sit and absorb the music and then, as I surfed the web later in the day, came across an October 2012 interview (audio and video) from Minnesota Public Radio. Taped as Ms. Schneider was in Minnesota recording the "...de Andrade Stories", the (nearly) 60 minutes she spends with interviewer Daniel Gilliam is filled with talk of birds, composing, her influences, the new music for the recording, ArtistShare and much more.  It's quite delightful - see and hear the conversation by going to ht.ly/ix1RP.  To find out more about Maria Schneider and her wonderful and wonder-filled music, go to www.mariaschneider.com.

Here are 2 poems, one each from Ted Kooser and Carlos Drummond de Andrade:

Spring, the Sky Rippled with Geese
Spring, the sky rippled with geese,
but the green comes on slowly,
timed to the ticking of downspouts.
The pond, still numb from months
of ice, reflects just one enthusiast
this morning, a budding maple
whose every twig is strung with beads
of carved cinnabar, bittersweet red.
(Ted Kooser, from "Winter Morning Walks: 100 Postcards to Jim Harrison", Carnegie Mellon University Press, 2001)
Quadrille
John loved Teresa who loved Raymond
who loved Mary who loved Jack who loved Lily
who didn’t love anybody.
John went to the United States, Teresa to a convent,
Raymond died in an accident, Mary became an old maid,
Jack committed suicide and Lily married J. Pinto Fernandez
who didn’t figure into the story.