One of the most creative as well as one of the more outspoken people in Black American Music is pianist/composer Matthew Shipp.  On Friday March 22, Mr Shipp returns to Firehouse 12, 45 Crown Street for his 3rd appearance at the performance space/recording studio.  And he seems to like to match the number of musicians with the number of times he has played; his initial appearance in 2005 was a solo piano concert, the next (in 2006) was a duo show with bassist William Parker and, this time he's bringing his Trio.  Joining him is bassist Michael Bisio and long-time drummer Whit Dickey (all pictured above).

Mr. Shipp is touring in support of his latest Thirsty Ear release, "Greatest Hits", which is a compilation of tracks from the past decade. The pieces range from solo observations to Trio cuts and larger ensembles. The music reflects the pianist's continuing creative probing of melody and rhythm.  Bisio and Dickey are perfect foils in that they are both excellent musicians, capable of playing anything that the composer puts on the music stand or follow whatever improvisatory path the pianist decides to take.

The Matthew Shipp Trio will play 2 sets - 8:30 and 10 p.m. (a separate admission for each) - and I strongly recommend reservations.  It was quite a treat to see and hear Stephen Haynes: Pomegranate last week (the music was and the musicians were mighty impressive) and also quite wonderful to see the first set sold out.   For ticket information, go online to firehouse12.com or call 203-785-0468. 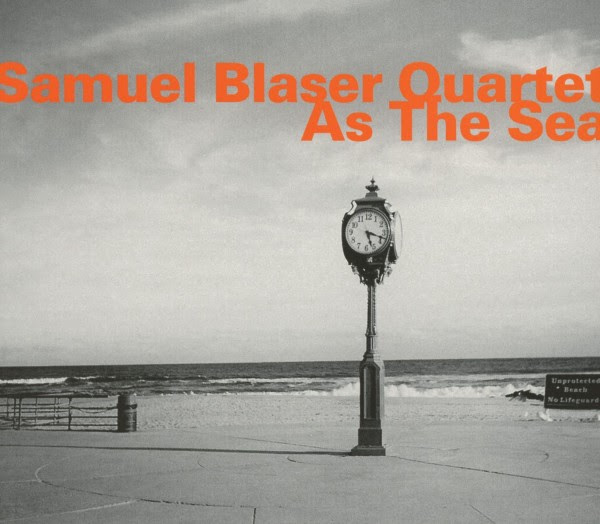 In the past 3 years, trombonist/composer Samuel Blaser has released several impressive CDs including a classical music-inspired date with the late drummer Paul Motian, bassist Thomas Morgan and pianist Russ Lossing plus a live date with guitarist Marc Ducret, bassist Banz Oester and drummer Gerald Cleaver.  13 months after that latter Quartet recorded its initial CD, they got together at the Hnita Jazz Club in Belguim; the results can be heard on "As The Sea", released on the Hatology label.  The 4-part title suite ranges from the introspective opening section to the full-out blast on both "Part 2" and "Part 4" Ducret, who sounds like the legitimate child of Bill Frisell and Derek Bailey (with more than a passing nod to Uncle Jimi Hendrix), gets an amazing array of sounds out of his guitar and pedals.  On "Part 1", the Frisell influence can be heard on the somewhat twisted solo in the middle of the cut while "Part 2" is hard edged and angular picking, Ducret climbing aboard the supersonic rhythm section (Cleaver is downright forceful.)  Blaser follows the guitarist with a fiery solo that blends rapid single-note lines with the multi-phonic blasts (a la Albert Mangelsdorff.) He and Ducret weave their lines in and around each other (and the furious rhythm section) on "Part 3", blending blues and free-blowing to great effect. "Part 4" takes the suite out on a raucous note with all 4 musicians in a high-energy mode.  Pay attention to the excellent work of Oester - he's not just the "anchor" of the band but his counterpoint is quite creative.

"As The Sea" begins to build halfway through "Part 1" and becomes a mesmerizing roller-coaster ride.  Samuel Blaser and company have built this music from numerous nights of free improvisation, they know, respect and like each other and this music hits the listener with quite a pleasing punch.  For more information, go to www.samuelblaser.com.

The first time I listened to "Hudson City Suite", the latest recording from pianist/composer Scott Healy, the music blew me away.  Haven't changed my opinion in the 4+ months the CD has been in rotation but am not sure why this review has taken so long (the word "laziness" comes to mind.)  Healy, who worked in Conan O'Brien's "show" band when he started at NBC and his subsequent move to TBS, admits to being greatly influenced by Duke Ellington.  There are moments on the 9 tracks that make up the "..Suite" where one can notice that influence but what is even more noticeable is how good this music and this 11-member ensemble are.  Employing mostly Los Angeles-based musicians (with the exception of trumpeter Tim Hagans who plays on 3 tracks), the composer's "little Big Band" (formally known as the Scott Healy Ensemble) is comprised of 3 trumpets, 2 trombones, 3 saxophones, piano, bass and drums.  While the songs have well-constructed melodies and intelligent arrangements, the solos are uniformly fine.  Each time Hagans takes the spotlight, he produces a winning solo.  On the opening "Transfer", he rises majestically over the ensemble while on "Summit Avenue Conversation", he just lets loose over the solid rhythm section of pianist Healy, bassist Carlitos Del Puerto and drummer Bill Wysaske.  The cut also features impressive solos from tenor saxophonist Alex Budman and trombonist Andrew Lippman - but the best part might just be the coda that features the saxophone section blowing over the comping" brass.

All of these pieces, even the short "Interlude" (1:47) in the middle of the program, are fully realized and never cluttered.  The mysterious "Princess Tongora", with its lullaby-like opening, features artful drumming from Kendall Kay (he's worked with Rickie Lee Jones, Kenny Burrell, Alan Broadbent and many others).  His cymbal and snare work under Jeff Driskill's soprano sax solo is both delicate and musical and he really drives the piece as Healy's piano solo reaches its climax.  Wysaske displays his excellent brushwork on the bluesy "Gaslight", the muted trombone solo of Lippman over the clarinet of Tom Luer and bass clarinet of Doug Webb an added treat as is Hagan's smooth and swinging flugelhorn spot.  Webb moves to baritone saxophone for the sly and slinky "Koko On The Boulevard"; the song's descending melody line carrying all the way through the first half, whether the rhythm section is moving in 3/4's time or blowing in 4/4.  Webb gets to drive his solo over the sparkling brass and shifting rhythms from the bass and drums (there's a hint of Charles Mingus in the arrangement near the end of the baritone solo.)

Though it is tempting to talk about (and praise) every track on "Hudson City Suite" (issued on the pianist's Hudson City label), let me suggest you go find this gem wherever you can (iTunes. Amazon.com, emusic.com).  Yes, one can hear the influence of Duke Ellington on the melodies and arrangements of Scott Healy but there is so much more to be heard in the voicings, the counterpoint and the inventive manner in which the composer writes for the sections of his talented ensemble. Positively smashing music - for more information as well as a handsome video devoted to the recording, go to www.hudsoncityrecords.com.
Posted by Richard B. Kamins at 9:25 PM