I am continually impressed and heartened by the number of younger people who find their way into jazz - many of them are already moving beyond the neophyte stage and launching serious careers.

A newly formed ensemble - 4Core - is in the midst of its inaugural tour that will culminate in an appearance on Friday August 24 at The Buttonwood Tree, 605 Main Street in Middletown (CT). Composed of Steven Feifke (piano), Raviv Markovitz (bass), Chad Lefkowicz-Brown (saxophone) and Jimmy Macbride (drums), they have all worked together in different ensembles but this is their first attempt at playing as a unit.  Macbride, a native of Hartford, CT, is well-known around these parts as he has been playing since he was a wee lad. He's been awarded numerous scholarships and currently attends the Juilliard School - he's also a fine composer.  Lefkowicz-Brown has recorded with bassist Ron McClure and drummer Clarence Penn (separately) as well as being a member of trombonist Natalie Cressman's band Secret Garden (just reviewed her fine new CD - read it here). He,also, leads a band with trumpeter Ivan Rosenberg that recently released its debut CD (find that here).  Markovitz started playing piano at the age of 4 before switching to the bass before he entered middle school. He's a double major (political science and mathematics) beginning his senior year at Columbia University and is a member of pianist Adam Kromelow's Trio (his CD is reviewed here).  Feifke (pictured above) is also beginning his senior year of college - he attends NYU where he studies jazz performance and economics.  Hes played with Chris Potter, Rich Perry and Lenny Pickett (among others.)  Feifke is another member of the group who began playing at the age of 4 (perhaps explaining the origin of the band's name.)

Each member of 4Core brings original compositions and arrangements to the band so one should expect an evening of classy yet sassy riffs, excellent solos and strong interplay.  For more information, go to www.buttonwood.org.  Each member of the band has his own website;  check them out at www.stevenfeifke.com, www.ravivmarkovitzmusic.com, www.chadlefkowicz-brown.com and jimmymacbride.com - then come see and hear them live on Friday (also at the Lilypad in Boston on 8/21 and 22 and The Regatta Bar in Boston on 8/23.) 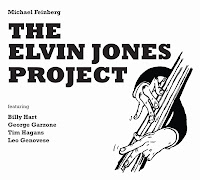 Michael Feinberg, a native of Atlanta, Georgia, is, like many jazz fans, drawn to the music of the classic John Coltrane Quartet of the early-to-mid 1960s.  But, it's the work of drummer Elvin Jones (1927-2004) that most attracted the 25-year old bassist. When he began to conduct a deeper study of Jones's career, Feinberg found the drummer working with bassists such as Gene Perla (still playing at age 72), Richard Davis, George Mraz, and Dave Holland.  Feinberg's new recording, his 3rd as a leader, is dubbed "The Elvin Jones Project" (Sunnyside Records) and features the excellent work of Billy Hart (drums), co-producer George Garzone (saxophone), Tim Hagans (trumpet) and Leo Genovese (piano, Fender Rhodes) - guitarist Alex Wintz appears on 2 of the 7 tracks.

The result is a joyous pastiche of styles and sounds that tickle and thrill the listener.  Hart (born in 1940), a close friend of Jones, gives this music its thrust and propulsion (and a quiet lilt when called for, as he does with excellent brushwork on "Nancy With the Laughing Face.") When he and Feinberg lock into a groove, as they do repeatedly during this program, the music explodes.The two lead "Taurus People" in on a jagged yet funky rhythm - the piece moves in and out of tempo under the piano solo and hear how they lay back and then lean on under Garzone's sweet solo.  Listen to their exciting drive beneath the soloists on "Three Card Molly" and "Mile Mode."  On the latter track, Genovese (who has been touring with bassist/vocalist Esperanza Spalding) really digs into the piano, creating a fiery solo that erupts from the speakers.  There's a "spacey" early-Weather Report sound to "Earth Jones" with Genovese's Fender Rhodes pinging back and forth between speakers, Hagan's higher-range solo and the throbbing bass line.  The one Feinberg original on the CD, "It Is Written", features Wintz's fine guitar work, pleasing muted trumpet, soft electric piano and Hart's quietly expressive drumming.  Composed with the sound of Jones' 2001 collaboration with Holland and Bill Frisell in mind, the music glides easily.  Wintz delivers a strong solo on the funky take of Frank Foster's "The Unknighted Nations" which also contains a speaker-rattling solo from Hart (who does not "imitate" Jones at any time during the program.)

"The Elvin Jones Project" can best be described as "inspiring music by inspired musicians" - bassist Michael Feinberg allows his musicians to be themselves and the music is better for it. On top of that, Feinberg continues to impress as a musician who knows where he wants his music to go.

The CD will be released on September 11, 2012.  For more information, go to www.michaelfeinbergmusic.com.
Posted by Richard B. Kamins at 7:01 PM