At the ripe old age of 20, trombonist-composer-vocalist Natalie Cressman has already had an extremely busy career. Daughter of vocalist Sandy and trombonist/engineer Jeff Cressman, she has played with Peter Apfelbaum, Josh Roseman, Wayne Wallace, Jai Uttal, the GRAMMY Jazz Ensembles, the SFJazz High School All-Stars and toured extensively for nearly 2 years with the Trey Anastasio Band. She's now studying at the Manhattan School of Music and is also enrolled in the Stanford Jazz Mentors program.

She's got the "creds" but, as the cynical ones aming us might ask, can she play? "Unfolding" (Cressman Music) is her debut as a leader and features her band Secret Garden, 5 excellent young musicians who, along with Ms. Cressman, take this music in many fascinating directions.  Featuring Ivan Rosenberg (trumpet), Chad Lefkowitz-Brown (tenor saxophone), Pascal La Boeuf (piano, Fender Rhodes), Ruben Samama (bass) and Hartford, CT-area native Jake Goldbas (drums), it is impressive how much of this music transcends the myriad influences.  One of the highlights is the exciting, passionate, reading of Charles Mingus's "Goodbye Pork Pie Hat" - from Ms. Cressman's sparkling reading of Joni Mitchell's poetic lyrics to Goldbas's hard-edged drive, the song rises on the artistic interaction of the
brass and reeds, La Boeuf's impressionistic piano and Samama's lyrical bass work. Rosenberg's solo over the high-flying rhythm section goes beyond youthful imitation.  As a trombonist, Ms. Cressman has a smooth tone, an easy facility and an innate ability to blend with the other musicians on the front line.  Her solos have a lyrical bent, even on pieces (such as the opener "Flip") that really push hard.  She also displays a articulate singing voice, words yet another important way to connect with an audience. Her version of "Honeysuckle Rose" (arranged by her and pianist Christian Sands) shows the influence of Esperanza Spaulding in the vocals and the rhythmic drive.  Still, her over-dubbed vocals work well alongside the burbling Fender Rhodes and the fine drum work.

Family friend and employer Peter Apfelbaum adds his strong tenor saxophone voice to the final track, the trombonist's original "That Kind."  He takes a lengthy solo that leads to Ms. Cressman's spot, a whirling dervish of short phrases and long tones that have a dancing quality.  Another one of her originals, "Skylight",  is an exciting blend of driving rhythms and impressive solos that start quietly before rising on the fiery percussion of Goldbas. Still, the composer builds in softer sections that give the piece its sharp contrasts.

"Unfolding" has much to recommend its purchase, from the creative interplay to the excellent rhythm section work to the striking solos to the pleasing vocal work. In the crazy musical environment that is 21st Century jazz, Natalie Cressman, while still a student, does not sound as if the conservatory has muted her desire to allow this music to go in multiple directions. There are those of us who enter this music through the rhythm section and Ms. Cressman has wisely chosen 3 musicians who truly shape this music to give the front line a substantial foundation on which to play.  This is "play-filled" music, neither stodgy nor reverential.  An impressive debut!  For more information, go to www.nataliecressman.com.

One might imagine that if you put a 20-year old alto saxophonist in a studio with pianist Kenny Barron and bassist Ron Carter, she or he might be a bit awed.  If Erena Terakubo, a native of Sapporo, Japan, was nervous, it's not at all evident on "New York Attitude" (4Q/King Records LTD) - in fact, this is the second time she's recorded with Barron (he appeared on her debut CD, released only in Japan.)With drummer Lee Pearson pushing the band from below, this music will please fans of straight-ahead jazz.

What stands out for this listener is how natural and unforced this session feels.  With a blend of recognizable standards ("This Here", "Invitation", "Star Eyes", "Body And Soul"), a pair of pieces from jazz masters ("Oriental Folk Song" by Wayne Shorter and the swinging "Del Sasser" by bassist Sam Jones), 2 originals, a song from fellow countryman Sadao Watanabe, and the title track by Barron, this program shines from the opening note. Dominick Farinacci adds his classy flugelhorn to both the Shorter and Jones tunes as well as his bright trumpet tones to "This Here." Still, the show belongs to Ms. Terakubo.  She can be lyrical, as one can clearly hear on her piece, "That's The Truth" and frisky on blazing tracks like the title tune and "Invitation" (note the splendid percussion of Pearson.)  She does not over-blow; even on the driving tracks, there's a bluesy sensibility to her phrases and tones.  There are moments when one can hear the influence of Cannonball Adderley on her playful riffs and lighter sound.

As to be expected, Kenny Barron's work sparkles throughout this program. Whether he's laying down a cushion of chords for Ms. Terakubo to soar atop or contributing his own short but absolutely "right-on" solo, he treats this music with respect and the saxophonist as an equal.  Not deferring to her or overshadowing her contributions but playing as a partner.  As for Ron Carter, he is the foundation, his thick tones pairing with the pianist's fine left hand work to offer counterpoint as well as his strong support.  The brilliant engineering and mix allows one to hear just how much Lee Pearson brings to this music, whether it's graceful cymbal work or his strong forward motion.

The title on the cover of "New York Attitude" credits the CD to "Erena Terakubo with Legends" - true, but, don't give short shrift to Ms. Terakubo's contributions.  She plays with zest and joy; that gives one lots of hope that she is destined for a bright future.  For more information, go to www.fourquartersent.com. 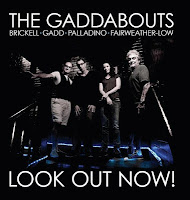 Those of us who have paid any attention to rock music over the past 3+ decades know the people who make up The Gaddabouts.  Assembled by drummer Steve Gadd (his list of credits would take up way too much space but he has appeared on a slew of Paul Simon recordings), the quartet features bassist Pino Paladino, guitarist Andy Fairweather-Low (founded the British group Amen Corner in the 1960s and has played with George Harrison, Eric Clapton, Bill Wyman and others), and vocalist Edie Brickell (of The New Bohemians and Paul Simon's wife.) "Look Out Now!" (RaceCarLottaRecords) is their 2nd release and it's a blues-drenched 2-CD set filled with smart playing and good songs.  Ms. Brickell possesses a softer but supple voice - she can be sly (as she shows on the political scree "Corruption"), sweet ("How I Love You" with the gentle marimba work of Mike Manieri), seductive (on the humorous "Don't Take All Day" or on the swamp groove of "Devil's Story" - sounds like Tony Jow White) and downright soulful (the hypnotic "River Rises").  Palladino's bass lines either rumble beneath the Gadd grooves or shadows the vocal lines but he never overplays.  Fairweather-Low supplies most of the guitar work (Ms. Brickell and Palladino add background guitars) and he does not disappoint;  whether it's the country-pop/skiffle beat groove of "Can You Feel It", the bluesy "wah-wah" solo on "Younger Woman" (great bass work as well) or the rippling acoustic riffs of "Wicked William", the guitarist hits all the marks.  Gadd is so solid throughout the CD; his New Orleans beat enlivens the title track, his subtle high-hat and cymbal splashes on "River Rises" draws one right in and dig the way his snare snaps on "Corruption."

"Look Out Now!" is perfect music for a hot summer's night -the music goes down as easy as cold iced tea.  These folks are "pros" and it shows. They don't try to do too much yet this music has subtle depths that will make come back many times.  Of course, the "grooves" will make you smile.  For more information, go to thegaddabouts.com.