For me, any recording with a cover drawn by Bill Griffith ("Zippy The Pinhead") has started off on the right foot.  It's also new music from the fine clarinetist and occasional tenor saxophonist Ken Peplowski and "In Search Of..." (Capri Records) - what's not to like.  9 of the 12 tracks feature the wonderful accompaniment of pianist Shelly Berg, bassist Tom Kennedy and drummer Jeff Hamilton - recorded in February 2010, the program is a blend of originals and fascinating covers.  For instance, the CD opens with  "The Thespian", a piece by pianist Freddie Redd (best known for "The Connection."). The tune starts slowly, Peplowski on tenor lovingly caressing the melody. About 2 minutes in, the quartet doubles the tempo and the piece sets off on a lively romp (the arrangement is quite similar to Redd's original._   "A Ship Without  A Sail" is a Richard Rodgers/Lorenz Hart work from the 1929 musical "Heads Up!" - it's a lovely ballad with a sweet clarinet solo over the terrific brush work of Hamilton as well as a lovely piano solo.  Another fine ballad is "When Joanna Loved Me."  Composed by the team of Jack Segal and lyricist Robert Wells, Peplowski based his version on a live rendition by Frank Sinatra.  Here, the leader plays tenor saxophone in a breathy but clear tone, never rushing through the melody, using longer tones, and one hears hints of Lester Young in the solo. Pianist Berg contributes 2 pieces, the lovely "In Flower" (an homage to Billy Strayhorn) and the lively "Peps", the latter a romp for the entire band.

The final 3 cuts come from an April 2007 session, the results of which have never been released. "No Regrets" is a lively tenor/bass duo featuring Greg Cohen. There is a surprising and respectful reading of George Harrison's "Within You and Without You", with Peplowski's clarinet subbing for the sitar plus fine percussion from Joe Ascione, atmospheric vibraphone from Chuck Redd and strong bass support and response from Cohen.  The CD closes with a lively New Orleans-influenced reading of "Rum and Coca Cola" performed by Ascione (drums) and the leader on the spicy clarinet.

If you are "In Search Of.." a fine musical experience, Ken Peplowski's latest CD is a treat.  Even without the Griffin artwork, this CD is worth finding. To learn more about the leader. go to www.kenpeplowski.com - for ordering purposes, go to www.caprirecords.com. 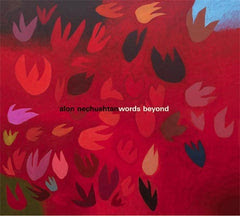 Israeli-born pianist/composer Alon Nechustan has been in the United States since the turn of the 21st Century. He studied at the New England Conservatory of Music, working with Bob Brookmeyer, Danilo Perez, Ran Blake and others.  Since moving to the New York City area, he has performed with a slew of musicians ranging from bassist William Parker to klezmer violinist Alicia Svigals to trumpeter Frank London.  He formed the "new" klezmer/jazz quintet Talat, releasing a CD in 2006 for John Zorn's Tzadik label.  Ayler Records released a live recording from a 2004 date in Boston featuring bassist John Lockwood and drummer Bob Gullotti (both members of the fine trio known as The Fringe.)

"Words Beyond" (Buckyball Records) is his latest recording and finds the pianist having a splendid time playing his original material with bassist Francois Moutin and drummer Dan Weiss.  It's not hyperbole to call the results a tour-de-force. From the two-handed romp "Muppet Shock" that opens the program to the hard-driving "The Traveller" (with the influence of Bud Powell evident in the melody) that closes the show, the listener often to needs to fasten his or her seatbelt. The material sounds "lived-in" and not "worn-out" - there is the joyous "Spinning The Clouds" that comes in on a Crescent City/Professor Longhair groove (kudos to Moutin's sprightly bass work and Weiss's "slippery" drums) then takes a "reflective" turn before a middle section in which the pianist's spars with his rhythm section.  One can hear traces of Thelonious Monk, Billy Strayhorn and Chick Corea in the theme of "Dr. Masterplan", the piano line moving upwards throughout the theme section.

There's plenty to absorb in this music.  The groove-based opening of "Entranced" that quickly and seamlessly moves into a modified Brazilian rhythm - Weiss's work is so much fun to check out here, from fine cymbal playing to the short "parade" drum outburst to his accenting the pianist's lines during part of the solo.  "Heartbreakthrough" is a pretty ballad with a lively melodic bass solo, fine brush and stick work from Weiss and a piano solo that moves through several moods with ease, ending with harp-like flourishes.

Listen to how the rhythm section interacts with Nechustan throughout the program. They are partners, not just sideman, in this creation.  The pianist/composer creates musical situations that allows to both Moutin and Weiss to play with creativity and intelligence; the quality of their endeavors makes this recording the unqualified success it is. Moutin's bass lines can be as rapid and booming as those of Stanley Clarke yet he rarely overplays.

To paraphrase a 1950's TV show opening, "there seem to be 8,000,000 piano trio recordings available these days" but few with the energy and vision that inhabits Alon Nechustan's "Words Beyond" - (only David Cook's fine BJU recording "Pathways" comes to mind.)  To find out more, go to www.musicalon.com or www.buckyballmusic.com.

Download and listen to "Dr. Masterplan", courtesy of Buckyball Music, by clicking here.