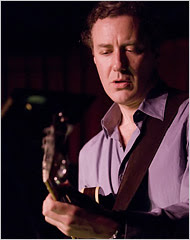 A sure sign that Spring is here is the return of the Firehouse 12 Concert Series,  13 shows over 13 consecutive Friday, starting this week (March 18) and running through June 10.  The handsome performance space, located at 45 Crown Street, seats 75 and brings in all kinds of performers in many different styles of jazz.

The series commences with the Adam Rogers Trio playing 2 shows, 8:30 and 10 p.m.  Guitarist-composer Rogers, a native of New York City, is a fluid, melodic, player who has recorded and toured with numerous artists, ranging from Paul Simon to Norah Jones to the Gil Evans Orchestra to Michael Brecker to Chris Potter and beyond.  The Criss Cross label has issued 5 of his CDs as a leader, the latest a  2009 Trio outing titled "Sight."  That recording features bassist John Patitucci and drummer Clarence Penn on a program of 3 originals, 3 standards and 4 jazz classics.

Penn, one of the most in-demand drummers around (the Maria Schneider Orchestra and the Dave Douglas Quintet are 2 of his more high-profile gigs) will join Rogers for the Firehouse date.  Anchoring the rhythm section will be the fine young bassist Matt Brewer (the Greg Osby Band).

This is not just music for "guitar freaks" but for people who like thoughtful, adventurous, and "swinging" jazz.  For ticket information, call 203-785-0468 or go to www.firehouse12.com. 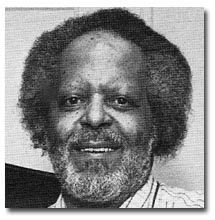 I had the joy of sitting and chatting with pianist Jaki Byard (pictured left) when he taught at The Hartt School of Music in the early 1980s (where, oh, where did I put that cassette tape?)  I admit that I was starstruck - the Worcester, MA, native has played and recorded with the great Charles Mingus, Eric Dolphy, Rahsaan Roland Kirk and Booker Ervin (among others.) Yet, he answered my questions thoroughly and with great humor as well as humility.

Byard (1922-1999) was a gregarious person and musician - in the course of a solo, he could move from "stride" style to classical music to ragtime to no-time and back to the blues.  As an accompanist, he was supportive without being intrusive yet always creative (nothing routime about his playing.)  In his later years, he not only taught but also led a Big Band (The Apollo Stompers).

High Notes Records has just issued the second volume of "Jaki Byard Live at the Keystone Corner", culled from a series of performances in the great Bay Area night club.  Subtitled "A "Matter of Black and White", the program is typical of Byard concert repertoire in that there are a number of standards, a "pop" tune ("I Know a Place", the Petula Clark hit), and an original.  His take of Thelonious Monk's "'Round Midnight" is dramatic and soulful while "Do You Know What It Means to Miss New Orleans" starts in a contemplative manner before the left hand drops into a "stride" rhythm.  Byard shows the influence of Art Tatum in the middle of the piece but brings the tune around for a bluesy finish. "Alexander's Ragtime Band" is delightful, joyous, played in a sprightly manner, throwing in a few "contemporary chord changes" to spice up the work.

He pays tribute to Billie Holiday with a medley of "God Bless The Child" and "Lover Man."  The former  has a light, lilting, feel until the middle when Byard reaches deep into the blues feel of the song before moving into a handsome reading of the latter.  He flirts with several different styles and pulls one along on the strength of his left hand and wonderful sense of melody.  The Duke Ellington-Billy Strayhorn medley that closes the disk begins with an introspective reading of "Lush Life" - filled with handsome chordal sections followed by single-note flourishes, the piece moves into "Day Dream", a reading filled with staccato "triplets" and a lovely reading of the melody.  Byard kicks up the tempo for a bravura take on "Johnny-Come-Lately" that changes tempo at will going from a bluesy ballad to a short and bouncy "stride" section into a rip-roaring, knuckle-busting, Rachmaninoff inspired close.

That kind of "stream-of-consciousness" arrangement signified Jaki Byard's way of communicating with the audience through the piano.  Everything and nothing was sacred, save for melody.  He would play with the "time", change the chordal structure, but, no matter the genesis of the song ("pop" hit, gospel tune, standard or original), the audience always heard melody and harmonic variations. And, the audience knew that there were in the presence of a master.

For more information about the recording, go to www.jazzdepot.com.  To learn more about the great Jaki Byard, go to www.jakibyard.org.
Posted by Richard B. Kamins at 9:41 PM