Masters At Work and Play

Reveille - Kermit Driscoll (19/8) - Bassist/composer Driscoll, mostly recovered from the Lyme Disease that laid him low several years ago, has finally issued his debut CD. This, from a musician who has worked with artists and ensembles as varied as John Zorn, David Johansen, John Hollenbeck, The New York Philharmonic and others.  Perhaps best known for his long association with guitarist Bill Frisell, Driscoll is rock-solid and wonderfully melodic, often creating a bottom on electric bass that seems expansive and full without being oppressive.

Here, he works with Frisell, drummer Vinnie Colaiuta and, on 5 of the 10 cuts, the keyboards of Kris Davis are added to present a program that eschews labels.  There's low-down funk on "Thank You" (with Frisell "shredding" like Nels Cline), the bouncy dance of "Chicken Reel" (displaying Drisoll's formidable "chops" and rich tone on upright bass), and the hard-edged jazz-fusion of Joe Zawinul's "Great Expectations."  Colaiuta, who powers the Jeff Beck Band, is an excellent foil for Driscoll's throbbing bass lines, driving certain pieces relentlessly (I detect a touch of Keith Moon in his enthusiastic playing.)  "Farm Life" moves slowly, somewhat gently atop the drummer's easy loping beat and Driscoll's hearty bass lines

Pianist Davis adds important colors to the pieces; her intertwining lines with Frisell on "Martin Sklar" (named for the contemporary American painter and printmaker from San Diego, California) give the piece its tension.  That similar push-and-pull appears at the opening of "Four Hearts" but the piece settles into a country-blues pace (even a bit slower on the handsome piano solo that is substantial as it rides atop the subtle interactions of the rhythm section.) Davis and Frisell open "Hekete" by weaving their lines around the bass and drums, slowly pushing the piece forward.  Her solo is understated, graceful yet rhythmic, hypnotic and subtly humorous (with nods to Monk and Bud Powell.)  When Frisell enters, he builds off the pianist's circular lines, following Driscoll's walking bass into a solo that struts and swings without heavy volume.  The guitarist is in the midst of a long and varied career but still has the capacity to surprise the listener with his inventiveness. On every track, Frisell stays away from the ordinary, from the cliche, to help create a diverse and entertaining musical canvas

Kermit Driscoll takes a solo now and then but really enjoys being part of the band; sometimes he goes with the flow, other times nudges the piece along with his uncomplicated yet powerful  and melodic bass lines.  This "Reveille" is more than a wake-up call to listeners about Driscoll.  It's a group effort that is filled with surprises and good music.

The CD will be issued in April - to find out more about the bassist's long career, go to www.kermitdriscoll.com. 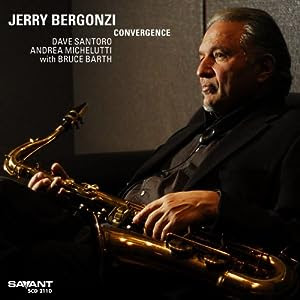 Convergence - Jerry Bergonzi (Savant) - This new release from the saxophone master was actually recorded around the time of his previous Savant CD, "Three for All."  Both recordings feature the same fine rhythm section, bassist Dave Santoro and drummer Andrea Michelutti.  The major difference between the 2 disks is the presence of pianist Bruce Barth on 3 of the 10 tracks.  Bergonzi, as on previous releases, overdubs soprano saxophone on several cuts to blend with his rich tenor sound. His progress on the higher-pitched reed is impressive, which one can delightfully hear on several excellent solos.

Bergonzi is one of those musicians who tends to be overlooked yet rarely plays a false note.  He has a great sense for swing, as he displays on the uptempo ballad (and the only standard on the program), the Gershwin Brother's "I've Got a Crush on You."  The way he builds his solo from the melody and chord structures will bring Sonny Rollins to mind. One hears that influence, and that of Thelonious Monk, on the faster-paced but not frenetic "Mr. Higgins."  Michelutti's drum work is notable in that he does not force the pace but knows when to stoke the intensity. His "parade drums" approach on "Seventh Ray" is inspired, really pushing the saxophonist to create the most interesting solos - the listener hears Bergonzi on both tenor and soprano and it's so good one forgets it's the same musician playing both solos. Throughout the program, Santoro's lines often serve as a counterpoint to the solos; the bassist does not settle for merely "walking" but keeps his phrases melodic and fluid.

Barth's presence alters but does not fundamentally change the dynamic of the group.  On the title track, his work is reminiscent of how McCoy Tyner worked alongside John Coltrane. The trajectory of his solo is fascinating, beginning with melodic phrases then twisting them to allow for chordal runs and single-note flights, all with different shades of the blues. His circular solo, phrases winding in and around themselves, is a highlight, setting the table for Bergonzi's inspired flight.

"Convergence" is Jerry Bergonzi's 6th CD for Savant; like the others, this one is worth recommending.  The music goes in many directions but never loses its way, nor do the solos meander. One can happily listen to this recording many times and hear something new with each sitting.  For more information, go to www.jerrybergonzi.com.
Posted by Richard B. Kamins at 10:32 PM